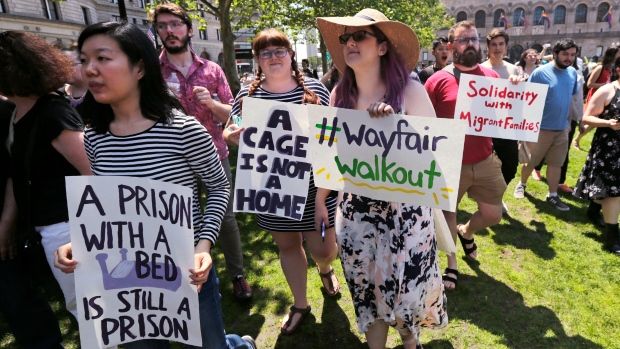 Employees of Wayfair march to Copley Square in protest prior to their rally in Boston, Wednesday, June 26, 2019. , The Associated Press

Scores of employees at Wayfair Inc. walked off the job on Wednesday to protest the online retailer’s sale of beds to contractors furnishing border camps for asylum seekers.

Workers left the company’s Boston headquarters around 1:30 p.m. and walked to nearby Copley Square, where the event drew at least hundreds of supporters. Groups of protesters led chants and played music before company employees and other speakers took to a portable microphone and individual interviews to make their cases.

“We sent out a petition to Wayfair leadership,” a protester who identified himself as Wayfair engineer Tom Brown told Bloomberg News, “and we got a response that we were not satisfied with. We don’t want to profit off these detention centers, these concentration camps, whatever you’d like to call them, and we want to do something about it.”

The organized walkout came after more than 500 employees signed a letter to company management urging it to stop doing business with detention camp contractors and demanding that the profits from the order in question be donated to a nonprofit agency offering legal services to immigrants.

Brown said he was “extremely” nervous at the event, given he’s only worked at Wayfair for about four months.

“I really, really like this job. I work with amazing people. But some things are bigger than me,” he said in an interview. “If I can do anything to alleviate the horrifying stuff that’s happening right now, that’s more important than my job. There are more jobs.”

Brown said some employees will return to work afterwards and others were opting not to. “It’s an individual decision,” he said. The event lasted about an hour.

As backlash emerged online, Wayfair said that it would donate profits from the sale of about US$200,000 worth of bedroom furniture to the American Red Cross, coming out to a gift of about $100,000. A spokesperson for the company did not offer additional comment on the protests.

BCFS, a non-profit government contractor who the letter says bought the Wayfair goods for the camps, stood by its involvement in a Tuesday evening email.

“We believe youth should sleep in beds with mattresses,” BCFS Public Information Officer Krista Piferrer said in an emailed statement.

When asked about BCFS’s statement, Madeline Howard, who says she’s worked for Wayfair for six and a half years, said that’s not the employees’ position.

“It’s our job to make it as hard as possible for them to operate these camps, and what we’re doing is an attempt to basically throw a wrench into what they’re attempting to do,” she said. “We don’t think the camps should run at all, we don’t think they should exist at all, and this is our way of telling them that.”

Representative Alexandria Ocasio-Cortez, the freshman Democrat from Queens who has become a leading progressive voice in Congress, tweeted her support ahead of the protest.

Wayfair is just the latest company to face intense public scrutiny from its employee base over political issues, according to Davia Temin, head of the New York-based crisis-management firm Temin & Co.

“Once you are in that spotlight, it will have an impact,” Temin said ahead of the protest. “It puts them on the wrong side of their customer base who are generally young and probably a little bit more activist.”

Some customers said online they planned to cancel their Wayfair orders over the issue. The company next reports earnings in late summer, when investors may get a look into whether the online backlash had any tangible effect on sales.

Wayfair shares were up 1.2 per cent to US$146.18 at 2:36 p.m. in New York on Wednesday, easing some of the previous session’s decline that was sparked by news of the protest. Year-to-date, the stock has advanced more than 60%.

“I’m sure they would like it to go away; I don’t think it will and now they’re going to stand for something,” Temin said of the retailer. “In this long run up to the general election, everything can become politicized. Corporate actions can become politicized. The corporation has to be aware of this and therefore has to pick its battles very carefully.”