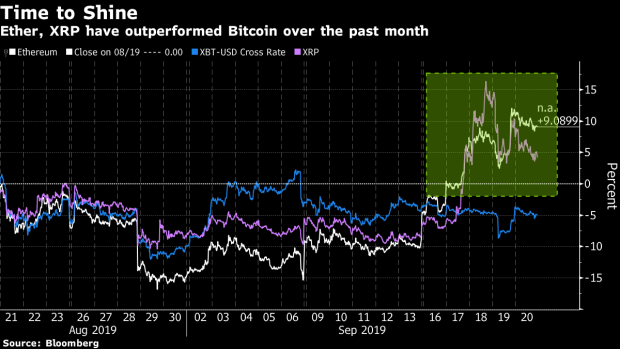 Cryptocurrency mining rig parts sit in a stack at the Bitfarms technology lab in Saint-Jean-sur-Richelieu, Quebec, Canada, on Thursday, July 26, 2018. Bitcoin has rallied more than 30 percent in July, shrugging off security and regulatory concerns that have plagued the virtual currency for much of this year. Photographer: James MacDonald/Bloomberg , Bloomberg

(Bloomberg) -- Bitcoin’s long been king of the cryptosphere. But alternative coins could be catching up while most investors are taking a breather.

The so-called altcoins, which have lagged behind Bitcoin’s performance this year, are gaining steam. Ether, the second-largest digital token, is on pace to break a six-month streak of underperformance relative to Bitcoin, data compiled by Bloomberg show. In six of the last 10 weekdays, Ether has bested Bitcoin in terms of daily percentage gains and has outperformed the largest digital currency in eight of the last 12 weekends.

Other coins are also catching up: XRP -- the third-largest -- has topped Bitcoin in seven of the last 11 days, the data show. In some corners of the market, that’s revived calls for an alt-season, or a period of time when smaller coins start to run up.

“Altcoins will continue to catch up,” Scott Freeman, co-founder and partner of JST Capital, said in an interview at Bloomberg’s New York headquarters. “With the realization that these technologies now are being adopted, they’re starting to solve real problems, and it’s coming to fruition at some level where the value proposition of these things is being recognized more broadly.”

Cryptocurrencies have staged a comeback this year following 2018’s rout, thanks to expectations of greater institutional adoption and Facebook Inc.’s plan to launch a coin. That’s pushed some major financial institutions, including the People’s Bank of China, into looking to mint their own digital currencies.

But regulatory pushback and a lack of progress on Facebook’s plans have stalled Bitcoin’s rally recently. It’s been hovering around $10,000 since July and is down about 5% over the past month. Meanwhile, Ether and XRP have advanced about 10% and 6%, respectively.

“There has been a pattern in the past: Bitcoin dominance soars, and then drops precipitously,” said Han Kao, founder and chief executive officer of Crypto Briefing. “I don’t expect to see a massive transfer of value from Bitcoin to alts this time around, but I do feel that as some projects begin to demonstrate clear use-cases and adoption, we can expect altcoins to start reclaiming a larger portion of investor attention.”

Not everyone’s sold on the idea that alternative coins are on the verge of staging a major breakout. Ethereum, the distributed network that uses the Ether token, has had its own issues, warning recently that the digital ledger behind the coin may be running out of capacity. That could make potential corporate users hesitant to use it.

Although Ether was initially hailed by diehards as a better version of Bitcoin, its predecessor still dominates the market. Bitcoin’s marketcap exceeds $180 billion, about seven times that of Ether, according to CoinMarketCap.com. Its market share as a percentage of the entire crypto universe has jumped to about 70% from 53% at the beginning of the year.Bitcoin’s dominance can be seen in trading data, as well. It accounts for 93% of customer transactions on CoinCorner, a crypto exchange, with altcoins making up the remaining 7%, according to Danny Scott, the company’s chief executive officer.For eToro’s Mati Greenspan, it’s too soon to call the start to an altseason. “People a re getting a bit more picky about what they’re investing in as far as cryptocurrencies,” said Greenspan, the trading platform’s senior market analyst. “Seems like those who’ve been waiting patiently for the emergence of a new altcoin season are just going to have to wait a bit longer.”