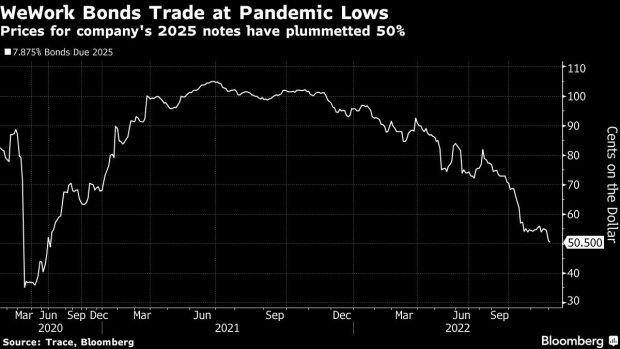 An office worker at a bar seat in a WeWork co-working office space in the Waterloo district in London, U.K. on Monday, Aug. 2, 2021. A survey this month showed that just 17% of London’s white-collar workers want a full-time return, and many said it’d take a pay rise to get them back five days a week. , Bloomberg

(Bloomberg) -- WeWork Inc. was downgraded one notch by Fitch Ratings as the office-sharing upstart continues to lose money and struggles to capitalize on a return-to-office push happening at companies globally.

Fitch lowered its rating on WeWork to CCC from CCC+ Friday, saying its challenges will only be exacerbated in the coming year as companies trim workers, scale back spending in anticipation of a recession and move slowly to retreat from hybrid work schedules.

Fitch also downgraded the company’s senior unsecured bonds one notch to CC from CCC-. Prices for its 7.875% bonds due 2025 have plummeted by almost 50% since their issuance in 2018 and are now changing hands at around 51 cents on the dollar, as of 4:22 p.m. in New York, Trace data show.

The downgrade comes after the company’s earnings fell short of Wall Street’s expectations in the third quarter. WeWork noted it had lost $629 million, compared with an average estimate of $367 million. And although more workers have come back to the offices, achieving its pre-pandemic numbers is likely to prove tough, Fitch said.

WeWork made its public markets debut in October 2021 following a merger with special purpose acquisition company BowX Acquisition Corp. It failed in its first effort to go public in 2019.

Fitch was the most bullish credit grader when the firm made its debut bond deal in 2018, assigned the debt a BB- rating, which is speculative but with adequate financial flexibility. S&P Global Rating’s and Moody’s Investors Service’s were less optimistic, with their ratings ranging from B+ to Caa1.