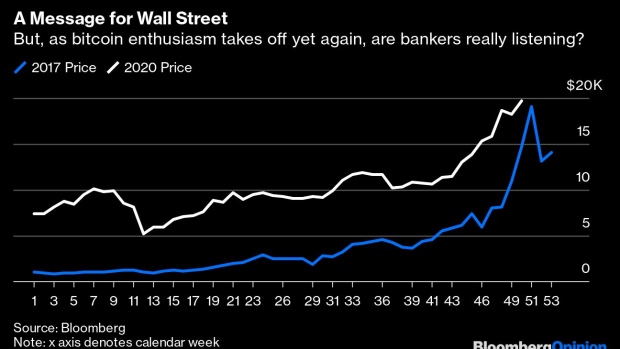 (Bloomberg Opinion) -- Bitcoin’s true believers are taking a victory lap after the cryptocurrency’s fresh all-time high of almost $20,000. “Onward and upward we go to the moon!” tweeted Tyler Winklevoss. “All governments, [financial services] and corporations will soon be mining Bitcoin to guarantee their own supply,” echoed Bitcoin advocate Charlie Shrem. That appears to be true of the Venezuelan army, at least.

But is this new record going to convert an often-skeptical financial sector, at least beyond hedge funds and strategists who see Bitcoin as a Covid-19 safe haven? Not everyone is convinced.

Last month, as the cryptocurrency hit $18,000 for the first time since 2018, Jamie Dimon at JPMorgan Chase & Co. said he hadn’t changed his mind since he called Bitcoin a fraud during its 2017 bubble. “We’re a believer in cryptocurrency, properly regulated and properly backed,” he said, adding, “Bitcoin’s kind of different, and that’s not my cup of tea.”

Dimon’s stance ultimately reflects the mood inside bulge-bracket banks that have been dipping their toes in crypto waters. Forged during the 2008 financial crisis as an artificially scarce, cryptographically secure way to bypass traditional finance, Bitcoin won’t be viewed as an existential threat to the banking system just because its price is soaring. But it won’t be ignored either. Rather it will be seen as a spur toward a more digital, regulator-friendly post-Covid payments future.

Bolder proposals such as Goldman Sachs Group Inc.’s bid to open a crypto trading desk never really got anywhere. The long list of risks highlighted by the Bank for International Settlements, from money laundering and terrorist finance to reputation, might have something to do with it. A survey of financial assets between 2010 and 2019 on the Bank of England’s staff blog found that Bitcoin’s market downside risk was 44%, steeper than stocks or gold.

None of this would normally be insurmountable for bankers when there’s real money to be made. But even with serious sums changing hands on crypto exchanges, and funds such as Guggenheim Partners LLC eyeing Bitcoin, the proverbial phone still isn’t ringing off the hook.

Even parts of the banking sector willing to go further know they need regulators on board. Singapore’s DBS Group Holdings Ltd. is planning to run its own digital currency exchange for qualified investors, but only once it receives regulatory approval. There’s certainly more oversight in 2020 than there was in 2017: European Union anti-money laundering rules now extend to crypto exchanges, and U.S. regulators allow banks to offer cryptocurrency custodian services. Still, European Central Bank boss Christine Lagarde this week reiterated Bitcoin and its ilk were “highly volatile, illiquid and speculative.”

The bigger question for Wall Street banks therefore isn’t Bitcoin itself but what comes next, especially since its clunky flaws as a method of payment are well-known. Central banks and private companies alike are scrambling to hit upon a mass-market alternative that might fix them. That might involve central bank-issued tokens like a digital euro, which is at least five years away, or a privately issued coin like Libra, which may be just one month away. Banks’ business models might be vulnerable.

For JPMorgan, it makes sense to pursue blockchain ideas like JPM Coin that could save money for banks in payments. The advantage isn’t just potential cost savings, but also attracting smart tech talent, as seen by LVMH executive Ian Rogers’s move to crypto hardware startup Ledger.

Lenders have no choice if they want to compete with digital rivals out to eat their lunch. Paypal Holdings Inc.’s recent foray into Bitcoin is part of a broader fintech push with apps like Venmo. The firm is also speaking to regulators about digital wallets. In a post-pandemic world of low rates and rising defaults, banks are worried about the tech crowd. After all, in the euro zone non-banks overtook traditional banks’ market share of deposit-taking and lending in 2018, according to the Centre for Economic Policy Research.

Crypto may be making a comeback after a long winter, but when it comes to Bitcoin, bankers can afford to hibernate a little longer. Staying one step removed, by offering banking services to money-spinning exchanges or facilitating futures trades, is the equivalent of selling pickaxes and shovels during the gold rush. Dimon’s right to hold back.