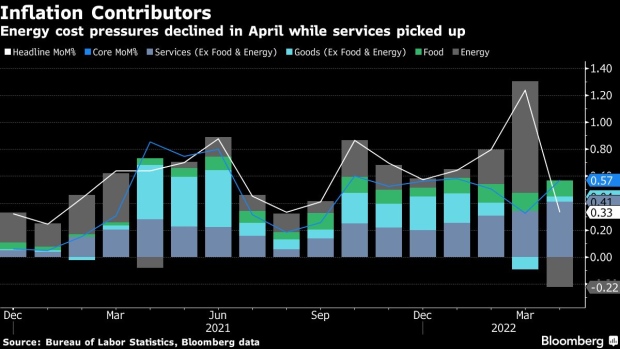 (Bloomberg) -- Americans got little respite from inflation in April, as prices for a range of necessities and discretionary-spending categories continued to climb at some of the fastest-ever rates.

While annual measures of consumer prices cooled slightly from March -- signaling a peak that economists expected -- the details of a report Wednesday painted a more troubling picture as monthly figures advanced more than forecast. Services costs accelerated while inflation for most goods remained stubbornly high, underscoring the persistence and breadth of price pressures.

There’s little relief in sight as Russia’s invasion of Ukraine combined with Covid lockdowns in China further disrupt supply chains and push up prices for everyday essentials. That’s only going to make the task of taming inflation without tipping the economy into a recession more challenging for the Federal Reserve, and increases the heat on President Joe Biden ahead of midterm elections.

“Whatever minuscule chance there was that inflation was already beginning to calm down has been dashed,” Stephen Stanley, chief economist at Amherst Pierpont Securities, said in a note, pointing out that he doesn’t see prices cooling.

Economists have been betting that a moderation in goods prices will help inflation come down as Americans emerge from pandemic restrictions and shift their spending to services like dining out. But that’s not happening yet.

The annual gain in food costs was the biggest since 1981 and included record advances in prices for chicken, fresh seafood, baby food and prepared salads. Meantime, the cost of fats and oils used for cooking rose the most since 2008.

In terms of services, costs for home utilities such as electricity rose 13.7% in April from a year ago, the most since 2008. Airfares surged a record 18.6% on a monthly basis. Shelter costs, which includes rents and hotel stays, also rose 0.5% for a third month, which has been the highest since 2005.

Those price dynamics will likely encourage the Fed to continue tightening policy at an aggressive pace. Officials last week raised interest rates by the most since 2000, and they’ve signaled more half-point hikes are on the table in the coming months.

“The Fed has little option but to keep jacking up interest rates to at least neutral levels as fast as possible,” Sal Guatieri, senior economist at BMO Capital Markets, said in a note.

The measure of so-called core prices, which excludes food and energy, rose 0.6% in April from the prior month, exceeding all estimates. The increase in the headline monthly figure was also more than forecast, though it was restrained by cheaper gasoline prices that have since climbed to a record.

Inflation accelerated 8.3% from a year ago, a slowdown from the prior month but still among the fastest in decades. Wages aren’t keeping up -- when adjusted for price increases, they fell for a 13th straight month in April, contributing to Biden’s dismal ratings among voters.

Before the report, economists surveyed by Bloomberg had been betting that annual inflation would dip below 7% in the third quarter of this year on expectations that supply chains will get back in order and inflation will dent demand.

Some aren’t as optimistic. Wells Fargo & Co. economists said Wednesday that they expect inflation to “get stuck” at a little under 8% year-over-year in that period. More than 60% of categories have seen prices rise more than 5% over the past year, which Wells Fargo noted was a slight improvement from March, but still the most in decades.

“Inflation remains widespread, making it all the more difficult to curtail,” economists Sarah House and Michael Pugliese said in a note.