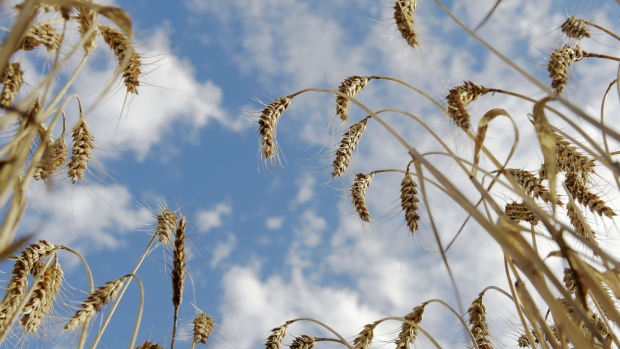 Wheat stalks stand at a farm near Drysdale, Australia, on Wednesday, Feb. 15, 2017. Wheat shipments from Australia may decline about 8 percent as production drops from the record reached in 2016-17, according to the country's agricultural commodities forecaster. , Bloomberg

Australia is normally one of the world’s largest exporters of wheat used for making bread and noodles, and buyers were looking forward to a bumper crop to ease tight global supplies. However, heavy rains and flooding in the east mean a large chunk of the harvest may only be suitable for livestock feed.

Freight corridors in parts of eastern Australia are in a state of disrepair following months of rain, with an estimated 10,000 kilometers of road impacted in New South Wales state alone. In Victoria, the situation is “absolutely dire,” according to Emma Germano, president of the Victorian Farmers Federation.

“Some of those roads out in regional Victoria are at a point where you can’t get heavy machinery across them -- so even if we’ve got crops that we can harvest, we might not be able to reach them given the state of the road,” she said. “It’s literally farmers trying to access their paddocks, or once they get their grain harvested, getting trucks to grain depots.”

Farmers group GrainGrowers on Tuesday called on the government to provide urgent road funding on freight access routes to avoid significant delays and logistical issues as the harvest nears.

Rail options aren’t looking much better. Major lines connecting storage sites to eastern ports have been shuttered for weeks because of the impact of flooding, which earlier this month led to the derailing of a freight train and cut a key Adelaide-to-Melbourne route for about a week until it was repaired.

The gridlock is piling more stress on fragile supply chains ahead of what is supposed to be the busiest period of the year. But with the rain and mud, the pace of harvesting has slowed to a trickle compared with a year earlier. Data from GrainCorp Ltd. show cumulative deliveries to its network are down 56% and 54% in the week to Nov. 28 for New South Wales and Victoria respectively.

“It’s just going to be so slow,” said Andrew Whitelaw, founding director of Episode 3, an Australia-based consulting firm. With farmers in the east unable to head out into fields to assess the damage, many are reluctant to sell until they have a clearer picture of the crop. “They’re just holding back,” he added. “At some point there’ll be a lot of grain getting sold at the same time.”

This season could be worse than 2010-11 when severe floods caused massive downgrades to the crop in New South Wales, Whitelaw said. “When we look at the discounting that’s already occurring for the lower grades, it’s already a much larger discount than it was back then.”

Still, strong export flows from the state of Western Australia should offer some relief to markets desperate for wheat. While rains have slowed the harvest in parts of the state, a large producer, the local industry association predicts another bumper crop. For the country as whole, wheat exports could still reach 26 million tons this season, almost three times the amount in 2019-20, when supplies were cut by drought, according to the US Department of Agriculture.