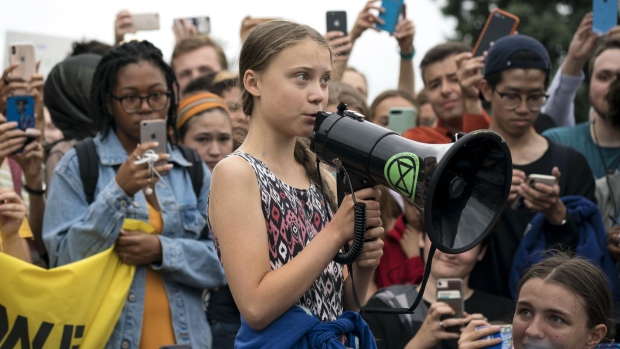 (Bloomberg Opinion) -- Call it the Greta effect. Global finance titans gathered at the annual International Monetary Fund meetings in Washington this week identified climate change as a key risk to the long-term health of the world economy. It was one of the hot topics discussed, perhaps partly inspired by the teenage activist who has made saving the environment a cause celebre. But a more immediate concern within bankers’ wheelhouses was also prominent on their worry list: Record levels of corporate borrowings, tucked away in hidden pockets of the financial system, have the potential to do great damage.

The IMF warned that as much as $19 trillion of corporate debt — or nearly 40% of total borrowings by companies in major economies — may be at risk of default in the event of a severe economic slowdown. Since 2009, corporate speculative-grade debt as a percentage of gross domestic product has soared in China and risen in the U.S., and with rates low, investors have been taking on more risks to boost returns. While banks may not have much of this risky debt on their own books, 80% of non-bank financial institutions are now as vulnerable as during the global financial crisis, according to the IMF. That number is up from 60% in April.

The risk is that losses could cascade through the banking and non-banking financial sectors, amplifying the shock of any downturn, said the IMF. And so it’s rightly calling on regulators to toughen and intensify their supervision of banks and non-bank financial institutions. Reviewing banks’ lending practices and carrying out targeted stress tests is already within supervisors’ remit and they should heighten their guard. Mapping out as much of the interconnectedness as possible should be a priority for supervisors.Of particular concern is the leveraged-loan market, which has grown to more than $1.2 trillion, and where there are signs that investors are already becoming anxious. This includes collateralized loan obligations, or CLOs, pools of risky loans that are bundled and sold in tranches. The Financial Stability Board is conducting a review of CLOs, with the aim of mapping out the owners of the securities and examining the potential implications of clients pulling out money in a downturn in a market now totaling more than $600 billion. The results can’t come soon enough.

That isn’t to say looking after the planet isn’t important. The IMF’s new chief, Kristalina Georgieva, who pioneered green bonds in 2008 while at the World Bank, is setting an ambitious agenda and provoking debate on climate change. Discussing whether assigning different risk weightings to assets that are more or less green fosters an important discussion that engages the financial community. Unsurprisingly, bankers are all too keen for green incentives that would lighten their capital demands. For now, though, the focus should be on setting common standards and definitions, and on a push toward mandatory disclosures. In the absence of those, identifying future risks and opportunities is an imperfect science.

Which is scarier: climate change or CLOs? The fact is, both pose major global risks and demand attention. All due respect to Great Thunberg, but the corporate-debt time bomb is the more imminent threat.

To contact the author of this story: Elisa Martinuzzi at emartinuzzi@bloomberg.net

Elisa Martinuzzi is a Bloomberg Opinion columnist covering finance. She is a former managing editor for European finance at Bloomberg News.