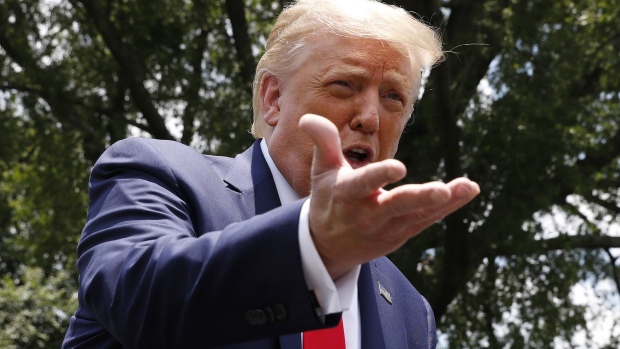 The White House is signaling to Congress that President Donald Trump could reject a new coronavirus aid bill if it doesn’t include a payroll tax cut, adding a new complication to already contentious negotiations.

“President Trump wants to provide relief to hardworking Americans who have been impacted by this virus and one way of doing that is with a payroll tax holiday,” White House spokesman Judd Deere said Thursday in a statement. “He’s called on Congress to pass this before and he believes it must be part of any phase four package.”

Trump considers a payroll tax freeze a red-line issue in talks, one person familiar with his thinking said, speaking on condition of anonymity.

Trump, with backing from conservative groups, has regularly called for a payroll tax holiday, and even mused about making it permanent. The move would put some money in the pockets of Americans with jobs but also blow a hole in funding for the Medicare and Social Security programs.

Many Republicans in Congress have been cool to the idea and Democrats have been solidly against it. The two parties are already far apart on how much and where to spend in the next virus relief package ,and adding the payroll tax to the mix threatens to drag out negotiations. Much of the last stimulus will begin running out in the next few weeks and the economy is continuing to reel as the pandemic rages across the country.

The administration has insisted on the payroll tax cut in conversations with congressional Republicans as they draft a bill for planned release next week, according to another person familiar with the talks. On Wednesday, the topic was brought up by Vice President Mike Pence during conference call with rank and file House GOP members, said that person.

Senate Majority Leader Mitch McConnell has not come out against the idea, but some Republicans have raised concerns about delays that could be caused in implementing it. Direct checks to individuals are seen as quicker.

The total cost of a payroll tax reduction varies widely depending how deep the cut is and for how long it lasts. If Trump were to get the maximum cut -- eliminating the full 15.3 per cent payroll taxes funding Social Security and Medicare that is split between employees and employers -- that would cost roughly US$100 billion a month, according to estimates from the Committee for a Responsible Federal Budget.