Trump administration officials are discussing ways to limit U.S. investors’ portfolio flows into China in a move that would have repercussions for billions of dollars in investment pegged to major indexes, according to people familiar with the internal deliberations.

The discussions are occurring as Washington and Beijing negotiate a potential truce in their trade war that’s rattled the world’s two biggest economies and investors for more than a year. They also come as China is removing limits on foreign investment in its financial markets. A U.S. crackdown on capital flows would therefore expose a new pressure point in the economic dispute and cause disruption well beyond the hundreds of billions in tariffs the two sides have levied against each other.

Among the options the Trump administration is considering: delisting Chinese companies from U.S. stock exchanges and limiting Americans’ exposure to the Chinese market through government pension funds. Exact mechanisms for how to do so have not yet been worked out and any plan is subject to approval by President Donald Trump, who has given the green light to the discussion, according to one person close to the deliberations.

Trump officials are also examining how the U.S. could put limits on the Chinese companies included in stock indexes managed by U.S. firms, three of the people said, although it’s not clear how that would be done. More Chinese companies in recent years have been added to major indexes that a broad array of investors have access to.

For instance, hundreds of Chinese businesses have been added into the MSCI Inc.’s indexes since last year — raising questions from Florida Republican Senator Marco Rubio and others on Capitol Hill who are advocating for stronger investment restraints and greater scrutiny for Chinese companies in stock indexes and U.S. pension funds. Bloomberg Barclays began adding Chinese bonds to its flagship Global Aggregate Bond Index in April.

The S&P 500 Index sold off initially after the news and was down about 0.3 per cent. Meanwhile, the 10-year Treasury yield fell to its lowest level of the day as investors sought a haven and stabilized little changed from Thursday’s closing level. The offshore yuan fell 0.3 per cent and touched its weakest level since Sept. 6. 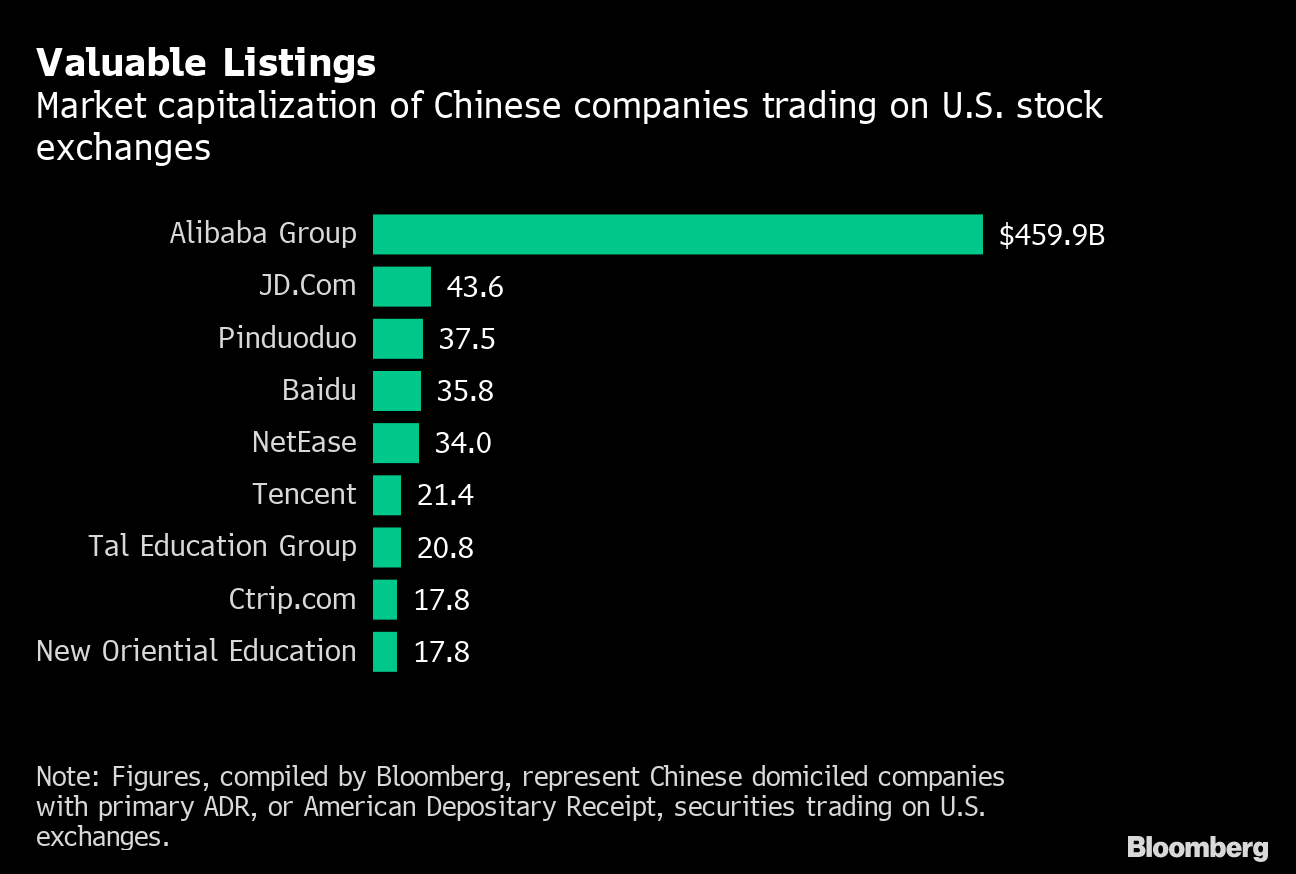 The White House has been discussing its plans with Rubio. It is now considering whether to back legislation he put forward over the summer that provoked much debate over the issue of how to protect U.S. investors with funds allocated into what are often opaque Chinese companies.The White House has not had any discussions with the Chinese government over the issue, said one person close to the administration. It also wants to keep any action isolated from the broader trade negotiations now underway, the person said.But high on the list of U.S. concerns is the unusual influence the Chinese government has over private sector companies and restrictions Beijing places on the release of some financial information of even listed Chinese firms.

The fresh momentum behind the effort is partly due to a push from lawmakers to demand reciprocity with Beijing and a pending deadline for the government’s main retirement savings fund — administered by the Federal Retirement Thrift Investment Board — to channel billions of dollars into Chinese companies next year, according to several people involved in the discussions.

The National Economic Council has been chairing meetings on the issue and the Treasury Department and National Security Council are involved as well, people familiar with the discussions said. While action is not imminent, according to the people, Trump’s advisers are talking through the various options and their expected impact.

At a dinner hosted by the Center for Strategic and International Studies in Washington last week, a group of China and finance experts debated the value and risks of a financial decoupling from Beijing, including how it could be done and what the impact on U.S. investors would be.

Among the speakers was White House economic adviser Larry Kudlow, who declined to discuss any specifics, according to people who attended the dinner.

The evening also featured deputy national security adviser Matt Pottinger, a China hawk who was just appointed the No. 2 at Trump’s NSC, as well as members of Congress.

The push to unilaterally limit Chinese access to American capital is spearheaded by White House trade adviser Peter Navarro, one of Trump’s most hawkish aides, and officials at the NSC, but people involved in the process say even more dovish advisers have rallied behind some of their suggestions.An NSC spokesman and Navarro declined to comment, and Pottinger didn’t respond to a request for comment. Spokesmen for the White House and the Treasury also declined to comment.

The arguments for action inside the Trump team vary from simply enforcing U.S. transparency laws and creating a level of reciprocity, to raising national-security concerns with some of the Chinese companies that American pension funds are exposed to, according to people familiar with the conversations.

Some of those companies are firms that the U.S. government has identified as bad actors or has imposed sanctions against. The argument continues that Americans would unlikely want to invest in those companies if they had the choice.The market capitalization of the 156 Chinese companies, including at least 11 state-owned firms, listed on the three-largest U.S. exchanges — the NASDAQ, New York Stock Exchange and NYSE American — stood at a collective US$1.2 trillion as of late February, according to a report by the U.S.-China Economic and Security Review Commission.

China earlier this month removed a US$300 billion cap on overseas purchases of Chinese stocks and bonds meaning global funds no longer need to apply to purchase quotas to buy the assets. The move is designed to lure more foreign capital into Chinese markets.

Roger Robinson, president and CEO of RWR Advisory Group who has been working on the issue since the ’90s, said this type of pressure can make a difference. “Treating the unequal financial dimensions and undisclosed material risks associated with China’s presence in the U.S. capital markets will likely represent the next big phase in the bilateral economic relationship,” he said.

One of the most extreme arguments for cutting China off from American capital — advanced by Navarro and outside advisers like Steve Bannon — is that U.S. investments in Chinese companies or on China’s exchanges mean that Americans are unwittingly giving financial support to the Chinese Communist Party and a rising strategic and economic rival.

Trump would also have the support of hardline advocates, like Bannon, his former chief strategist, and hedge fund manager Kyle Bass. Both are leading the Committee on the Present Danger: China. It’s a group that advocates for total economic decoupling as a way to secure America’s national security.

In a recent “threat briefing” — which is how the group titles its meetings — Bannon said American financing have helped spur China’s economic ambitions and technological advances.

“The Frankenstein monster that we have to destroy is created by the West. It’s created by our capital,” Bannon said at the Sept. 12 briefing.

While some administration officials see these steps as giving the U.S. more leverage in the trade negotiations, others are working hard to ensure the two are kept separate. At the same time, the administration is hesitant to move forward on this out of fear that the already fragile economic relationship between Beijing and Washington could collapse.

In particular, officials at the Treasury Department and the National Economic Council are wary of how any action could spook investors and are trying to signal to relevant stakeholders that the rule of law can be trusted. Those officials would want to frame any move as taking action against known bad actors that have persistently been out of compliance with U.S. laws.

The NEC is still working on an analysis of the potential impact of any moves targeting financial flows. Just when that might be completed is unclear.

Nathan Sheets, former Treasury undersecretary for international affairs, said action to delist Chinese companies or direct American dollars away from certain firms would be “a big deal” for markets and the bilateral relationship. “Both of those would be very disruptive. On the order of a kind of Huawei announcement,” he added, referring to the Trump administration’s blacklisting of China’s biggest telecommunications-equipment manufacturer.

Rubio, who sponsored the so-called EQUITABLE Act, is the biggest champion of such efforts on the Hill and his public comments largely mirror what the White House is discussing. The senator applauded the White House’s work on the issue.

“This administration deserves credit for their efforts to deal with the threat that the Chinese government and Communist Party poses to U.S. national and economic security, including how Beijing takes advantage of its access to U.S. capital markets for predatory purposes,” Rubio said in a statement.

--With assistance from Saleha Mohsin and Mark Tannenbaum