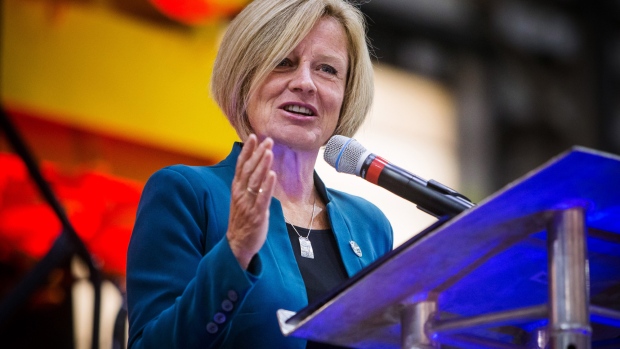 Flame burns from a stack at the Syncrude Canada Ltd. refinery north of Fort McMurray, Alberta, Canada, on Saturday, June 4, 2016. Residents began returning home this week and companies are resuming operations after Alberta wildfires forced the evacuation of more than 80,000 people from Fort McMurray and knocked more than 1 million barrels of production a day offline this month. Photographer: Darryl Dyck/Bloomberg , Bloomberg

(Bloomberg) -- Global oil giants like the U.S., Russia and Saudi Arabia that command the attention of traders had some unexpected company on Sunday: a province of less than 5 million people in Western Canada.

Alberta added to a crude price rally Monday when Premier Rachel Notley announced producers must reduce output by 325,000 barrels a day starting next month. That’s more than the production of three of the 15 members of the Organization of Petroleum Exporting Countries (Equatorial Guinea, Gabon and the Republic of Congo) and nearly a fifth the size of the cuts OPEC and its allies agreed to nearly two years ago.

“You could say that Alberta is chipping in on the current OPEC cuts to bolster prices unintentionally,” Kevin Birn, IHS Markit’s director of North American crude oil markets, said by phone Sunday from Calgary. “It’s not an intangible cut.”

What’s more, most of the impacted output rides direct links into the U.S., the world’s biggest consumer. The Alberta announcement came just hours after Russia and Saudi Arabia agreed to extend their deal to manage the oil market into 2019, sending West Texas Intermediate prices up as much as 5.7 percent.

Canada is the world’s fifth-largest oil producer, with most of it centered in Alberta’s oil sands. Enbridge Inc. and TransCanada Corp. operate pipelines that bring that crude to Cushing, Oklahoma, the delivery point for WTI. The grade traded up 5.3 percent at $53.61 a barrel as of 1:16 p.m. in Singapore.

Production has surged beyond the capacity of pipelines and refineries to move it all away, in part because environmental and political hurdles to pipeline expansions. That’s created a glut of oil in Alberta.

Western Canadian Select’s discount to WTI expanded to $50 a barrel last month, the widest spread in more than a decade, amid pipeline bottlenecks and reduced demand from U.S. refineries undergoing maintenance. It has since narrowed to $29 amid increased refinery demand and rising shipments by rail.

The output curtailments could further shrink the discount by $4 a barrel, the Alberta government said in a release. Joan Pinto, an energy specialist at Canadian Imperial Bank of Commerce, said in an interview the cuts could reduce the differential by more than $4, and that it will even benefit producers that are integrated and have downstream capacity to deal with wide differentials.

“You get a $10 bump up in prices, that’s going to benefit producers, even the ones with downstream operations,” she said. “If we can’t deal with increasing our takeaway options, the only way to deal with the excess supply is shut it down.”