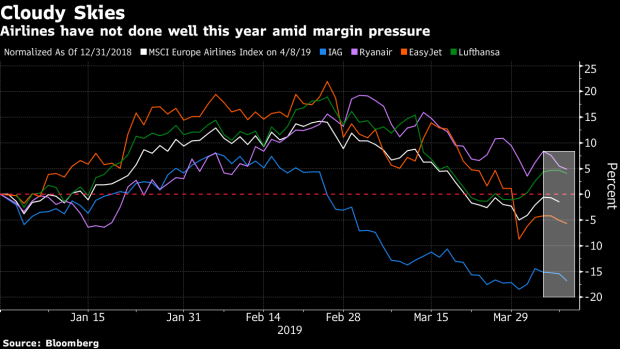 (Bloomberg) -- Ahead of the earnings season, European shares are bubbling near an eight-month high, making yesterday’s retreat seem mild against the broader rally. In the past quarter, several big companies issued profit warnings, yet the reaction of investors has been somewhat surprising.

Among the names that have caught my eyes are a number of major European tech companies, namely Infineon, AMS, ASML and Ingenico. Infineon has gained 15 percent this year. Infineon quickly recovered from a profit warning in late March. AMS warned in February and even suspended its dividend, but the shares are near a five-month peak now.

Part of that may be a correction from excessive pessimism in late 2018, when a lot of bad news got priced in. Also, it seems that short-sellers have at least partially covered their positions on some of these stocks since then.

It’s not just the tech sector. German carmaker BMW has also recovered its losses after cautioning on earnings. Among financials, France’s BNP Paribas simply shrugged off its warning, while Julius Baer is up a staggering 17 percent two months after cutting its targets. Even UBS has recovered after sayings its last quarter was among the worst environments in recent history.

One possible reason for the strength is that earnings-per-share expectations seem to be on the rise after several months of decline. After a rally driven by dovish central banks, easing trade tensions and signs of a bottom out in PMIs, companies may need to show some profit growth. At the moment, the expectation bar is still quite low.

Obviously, there are exceptions. Airlines are a good example. Lufthansa and Easyjet warned about their earnings this year and the shares have yet to recover. The sector was penalized by Brexit uncertainty, rising oil prices as well as margin pressure.

The earnings season may prove to be crunch time for the Stoxx Europe 600 to sustain this year’s 14 percent rally. There are obstacles to overcome with trade jitters heating up again between the U.S. and Europe, Italy raising its budget deficit forecast and the IMF cutting its global growth outlook to the lowest level since the global financial crisis.In the meantime, Euro Stoxx 50 futures are down 0.1% ahead of the open.

NOTES FROM THE SELL SIDE:

--With assistance from Hanna Hoikkala.

To contact the editors responsible for this story: Blaise Robinson at brobinson58@bloomberg.net, Jon Menon