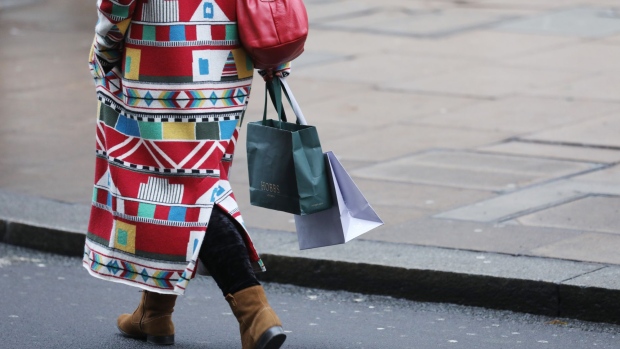 A shopper carries a branded shopping bag from a Hobbs store, operated by The Foschini Group Ltd., in London, U.K., on Thursday, Dec. 21, 2017. U.K. consumer confidence slipped to a four-year low in December and risks weakening further in 2018, according to a GFK UK Consumer Confidence Indicator report. Photographer: Luke MacGregor/Bloomberg , Bloomberg

Over the past two months, consumers have flocked from one hot-ticket item to another even as widespread retail closures and physical distancing measures aimed at slowing the spread of COVID-19 has Canadians spending less overall.

The reason for long lines at the grocery store is apparent-- shuttered restaurants means pantries need restocking faster -- but it's less obvious why a viral infection triggers a run on Charmin. But experts say unique spending habits are to be expected at a time when consumers are guided by evolutionary impulse, schedule changes and even boredom.

In the week ending March 14 -- about two weeks after Health Minister Patty Hajdu advised Canadians to prepare supplies at home -- sales of hand sanitizer, masks and gloves skyrocketed, with sanitizer sales up by 639 per cent, Statistics Canada reported.

Less expected was a sudden run on toilet paper, however, with purchases spiking 241 per cent year over year by mid-month.

"It's an item without a substitute," said Jeff Donaldson, a PhD candidate at Carleton University and public policy researcher focusing on emergency preparedness. "From a basic primal human need, of all the things that we don't want to run out of, it's toilet paper, because it's one of those few products that's required for daily functioning."

That Canada has a robust pulp and paper industry made no difference to shoppers. "All we need is to see one picture of 15 people lined up at Costco with their carts full of toilet paper and you just set off the human race going after toilet paper, because we have a fear about it," Donaldson said. From a psychological perspective, he said, uncertainty often has people seeking a sense of control. Stocking up on supplies fills that need.

Trust in authority also played a role. Grocery purchases peaked in mid-March, shortly after Prime Minister Justin Trudeau announced sweeping steps to tackle the virus following a drumbeat of public health advisories on physical distancing. "We trust our institutions," Donaldson said. "A lot of consumer decisions and awareness is based upon information flow from official sources."

Among the top-selling grocery items were non-perishable staples like pasta, soup and canned vegetables, according to StatCan. And as baked goods started to appear on more social media feeds, flour was highly sought after.

"My kids are baking like there is no tomorrow. And I'm their best customer," said Sandrine Devillard, who co-authored a McKinsey & Co. report on current purchasing trends.

The survey, conducted between April 21 and 23, asked consumers about their spending plans in the near future. McKinsey found that Canadians expect to pull back financially in all but three of the 32 spending categories: Groceries, snacks and home entertainment.

"The trends tend to mirror our behaviour," said Michael LeBlanc, a senior adviser at the Retail Council of Canada.

Bound to their kitchens and living rooms, Canadians say they intend to spend much more time cooking, watching movies and shows, communicating by phone and online and tackling home improvement projects, McKinsey found.

A recent Royal Bank of Canada analysis concluded consumers are spending more on household construction as well as books, music and streaming.

Apparel sales are sagging severely -- "tiles, not turtlenecks," as RBC put it. But upmarket tops are in demand amid the proliferation of video conferencing, LeBlanc said.

"Maybe it's time for a nice, bespoke sweater to make me look good on Zoom."

Spending on home entertainment including books, music and cable and streaming continued to increase in the week of April 21, rising more than 20 per cent above the pre-COVID-19 average, according to RBC.

E-commerce groceries, which accounted for roughly 1.5 per cent of grocery sales in 2019, have shot up to between 10 and 12 per cent of the total, LeBlanc said.

New routines -- like buying groceries online -- that are compelled by circumstance can settle into entrenched behaviours that change the retail game in the long term.

"Times of disruption like this are times when a lot of thoughtless habits break," said Nathan Novemsky, a marketing professor at the Yale School of Management.

"Maybe shoppers felt they needed to pick out their own tomatoes and apples at the supermarket -- didn't trust not seeing food before they got it -- but once they tried online, the vast majority of people said, 'Oh, this is pretty nice."'