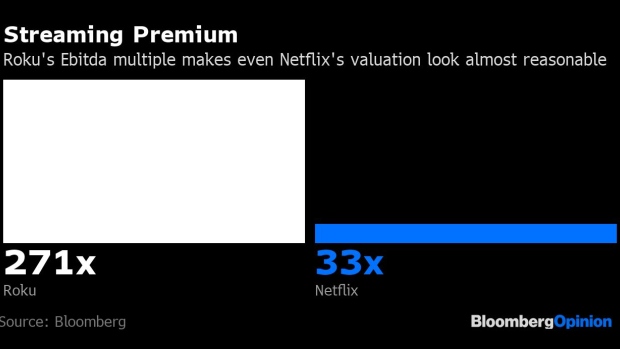 (Bloomberg Opinion) -- You’ve just witnessed the semi-annual Roku Inc. sell-off. It’s the time of year when investors come to the abrupt realization that they’ve probably paid too much to own shares of the high-flying streaming-TV company, as if valuing anything at 300 times Ebitda were ever rational.

Here’s how it usually goes down: An equity analyst downgrades Roku, sending the stock into a tailspin, which leaves onlookers wondering what terribly bad thing occurred at the company — or what a Roku even is. This time, that analyst was Benjamin Swinburne of Morgan Stanley. He cut his rating to the equivalent of a “sell,” and oh, did the market listen: Roku plunged 15% on Monday for one of the Nasdaq’s worst post-Thanksgiving showings.

But what changed the last few days between carving the turkey and putting up the Christmas tree? Nothing, really. In fact, Roku’s stock price is still up 344% for the year, and it’s still the most popular streaming-TV device. As of last week, the company was valued at a whopping 322 times analysts’ forward 12-month Ebitda forecasts. Swinburne’s report explained that while Roku’s strategy is sound, its sky-high valuation is unjustified given that revenue growth is projected to slow.

When several other analysts gave a similar word of caution in April, it sparked a sell-off then, too. But just as I noted at the time, it’s not that Roku’s business prospects were suddenly and dramatically altered; it’s more a function of an overheated stock price. If you think a perpetual cash-burner like Netflix Inc. is pricey, keep in mind that Roku’s own Ebitda multiple is still almost 10 times higher, even after Monday’s drop:

Part of the problem is that in the bewildering market for streaming-TV services, it’s difficult to grasp what Roku does and to hedge what its role will be in the streaming wars. And certainly the $1.7 billion of short interest in Roku shares (per S3 Partners data) adds a degree of pressure to its trading price.

Roku is fighting the giants of the streaming world on two fronts. It sells hardware and provides software that’s pre-installed on certain television sets, all of which allow users to access their video-app subscriptions, such as Netflix, Disney+ and CBS All Access in one place. Roku is also competing for advertising dollars through the ad-supported Roku Channel, which is less of a channel in the traditional cable-TV sense and more of a hodgepodge of free movies and shows for cord-cutters looking to save money.

Roku devices accounted for 44% of all connected-TV viewing hours in the latest quarter, while Amazon.com Inc.’s Fire TV is in a distant second place with a 20% share, according to Conviva, an industry analytics firm. That’s a strong lead, but competition will intensify. The next frontier in streaming is offering bundles that help solve the consumer pain point of needing to pay for multiple apps individually. Eventually, users will gravitate to platforms with this capability. Comcast Corp.’s Flex platform, I argued last month, may be a step toward bundling streaming services in the way the cable giant packages traditional TV channels and its other services. Apple Inc.’s Apple TV Channels already allows users to subscribe to select apps on an a-la-carte basis through their Apple IDs.

But the warnings about the growth outlook require a bit of context: We’re talking about a business that increased revenue by 50% in the third quarter and is projected to do so again this quarter. A slowdown from that level would still be a dream for many corporations its size. “Roku reported a strong quarter for just about any company but Roku,” is how Alan Gould, an analyst for Loop Capital Markets, put it in a note to clients last month. Roku also added 1.7 million active accounts — that’s almost the same number of people who quit traditional pay-TV services such as Comcast’s Xfinity, AT&T Inc.’s DirecTV and Charter Communications Inc.’s Spectrum in the same period. And if Roku’s $16 billion market value shrank enough, an acquirer might just swoop in for the company and all those users and TV-manufacturer relationships.

So things aren’t quite as bad for Roku as one might infer from Monday’s plunge. They really aren’t bad at all. But Roku’s the small fry in a land of giants, and even if it doesn’t get trampled, its lavish stock price will keep taking hits.