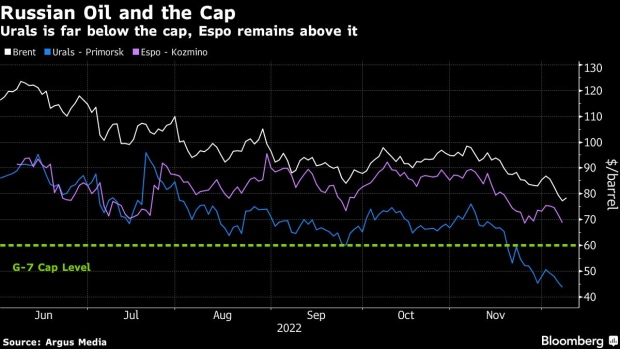 (Bloomberg) -- Four days into the G-7’s cap on Russian oil prices, and it appears most — but not all — of it is trading well below the threshold being imposed on Moscow.

That’s not necessarily down to the cap itself, although it may be contributing.

The country’s Urals grade, which accounted for about 60% of the nation’s seaborne exports over the past year, traded at $43.73 a barrel on Wednesday, according to data provided by Argus Media. The crude is transported from ports in western Russia.

Russia’s loss of its historic European markets due to sanctions, soaring freight costs, and increased dependence on small group of faraway Urals buyers — especially China and India — mean the barrels must be discounted to compete with supplies that are more local to Asia.

About three-quarters of Russia’s seaborne oil was transported from the country’s west this year. As more of it goes to Asia, it requires transportation over thousands of miles, sucking up more and more tankers. Much of that would previously have stayed in Europe.

It’s a different price picture for cargoes from the east of Russia that are closer to Asian demand centers. The ESPO grade, named after the initials of a pipeline that carries the barrels from eastern Siberia, fell to $68.72 a barrel on Wednesday, the Argus data show.

Both grades are also far lower than Brent futures, which stood at about $78.50 on Thursday.

Argus’s figures are used by the Russian government to calculate export duties. They’re also cited regularly in reports by the Paris-based International Energy Agency, whose calculations will help to determine future adjustments to the cap.

The key thing depressing Urals is likely the loss of European buying, rather than the cap, said Michael Carolan, ead of EMEA crude pricing at Argus.

“Urals now has no customers on its doorstep, so prices have to be cut to attract long-haul buyers,” he said. “That is down to sanctions, and previous self-sanctioning by Europe’s refiners, rather than the price cap.”