Why this B.C. gold explorer has a million-ounce head start - BNN Bloomberg
{{ currentBoardShortName }}
Markets
As of: {{timeStamp.date}}
{{timeStamp.time}} 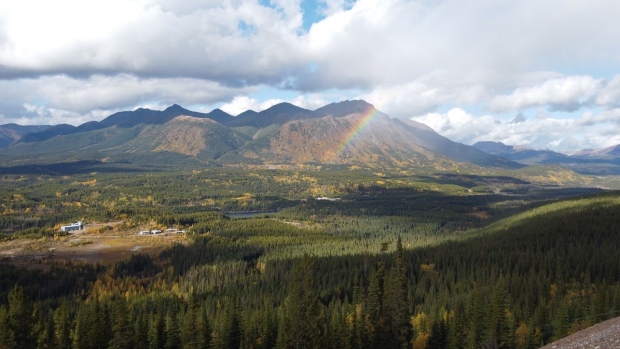 Gold soared in 2020 following the post-lockdown crash that impacted all asset classes. The yellow metal has since given back much of its mid-spring to mid-summer gains and is currently trading just below USD$1,800/oz.

But to many analysts, this is a just a pause before a resurgence for gold prices. As reported in Kitco in February, Canadian Bank, CIBC, recently revised its 2021 gold price estimate from USD$2,300/oz to USD$2,100/oz, which would still be a USD$300 boost from current levels.

The reasons for this qualified bullishness relate to the massive amount of fiscal stimulus that has flowed, and appears poised to continue flowing, into the global financial system.

Combined with a U.S. Fed that appears content to hold interest rates near zero for the foreseeable future, all this stimulus has the potential to raise the specter of inflation, which historically has been a very positive development for gold.

Signs of this bullishness are reflected throughout the gold mining industry, which is both profitable at current levels and actively on the hunt for growth via exploration]. British Columbia is one of the hotbeds of activity, with 22 mines either in operation or under construction.

It’s an environment that sets up well for Cassiar Gold Corp (TSXV: GLDC | OTCQB: CGLCF), which has a district-scale gold property in northern B.C. with a large gold resource to build on.

“Based just on the immediate opportunities we have on the Cassiar project’s 15 km trend we believe it has the potential to host over three million ounces of gold.”
— Marco Roque, President & CEO, Cassiar Gold Corp.

The company’s flagship project, the eponymously named Cassiar property, is a target-rich environment.

In addition to boasting a million ounce inferred gold resource, as per Canada’s NI 43-101 requirements, it has high-grade targets that could provide a boost to the bulk-mineable resource’s potential economics.

At 56,000 ha, the Cassiar project lies atop an orogenic geological setting with 15 km of strike potential. Orogenic gold systems are currently the most prevalent source of gold globally and include some of the highest-grade deposits.

Cassiar Gold’s CEO, Marco Roque, elaborates, “Based just on the immediate opportunities we have on the Cassiar property 15 km trend, we believe it has the potential to host more than three million ounces of gold.”

Roque adds, “We are currently focused on two main targets areas within our 56,000 ha land package, the Taurus bulk tonnage deposit at North Cassiar and the high-grade vein systems at South Cassiar. Following a very successful exploration program in 2020, we are also substantially increasing our exploration budget this year to 15,000 m, with most of it going towards the high-grade targets at South Cassiar”

Indeed, the Cassiar South area was mined historically as a high-grade underground operation, producing 315,000 oz of gold with grades higher than 15 g/ton Au. The project comes with a wealth of data collected by prior operators.

Given the project’s access to infrastructure and the presence of a permitted 300 tonne-per-day mill, Roque’s team at Cassiar is confident in its ability to both grow this project and move it towards a production decision.

A team built for success

That team has seen several key additions over the past year and now includes a stacked bench of technical advisors to help support the work of VP of Exploration, Kaesy Gladwin. Those players include:

Doug Kirwin – Technical Advisor: Kirwin has over 50 years in the mining industry and led the discovery team for the super-giant Hugo Dummett Deposit at the Oyu Tolgoi project in Mongolia.

James Maxwell – Technical Advisor: Maxwell is currently Exploration Director at Sabina Gold & Silver, where he has helped its Back River project in Nunavut into a nearly 10 Moz resource.

Steve Letwin – Chairman: Letwin was recently appointed to the role of Chairman and brings over 30 years of experience from the resource sector where he specializes in corporate finance, operational management as well as mergers and acquisitions. Letwin also spent 10 years as President and CEO of IAMGOLD, one of the gold sector’s premier mid-tier producers and is the largest individual shareholder of Cassiar.

Steve Robertson – Director: Robertson is an award-winning mining professional who brings to Cassiar over 30 years of mining industry related experience, having played a key role in building and advancing projects from exploration through to production in British Columbia including the nearby Silvertip and Red Chris mines. He was most recently the founding CEO of Sun Metals.

Marco Roque – President, CEO and Director:  Roque took the reins at Cassiar last summer and brings with him a long track record in the financial sector and has co-founded both public and private mining companies such as Reyna Silver and Infinitum Copper. He is also the co-founder and director of Arabian Shield Resources, a private mining company engaged in the acquisition, exploration, and development of mining assets in the Arabian-Nubian Shield and surrounding regions of the Middle East.

Roque sees the Cassiar team as a key competitive advantage, saying, “We have assembled a diverse and experienced team of geologists, engineers, operators and capital markets professionals who have multiple successes in this sector. This an invaluable asset to the company and it’s great working alongside this team as we progress the Cassiar Gold project.”

As Roque and his team look ahead to this year’s work program at the company’s flagship project, it will build on the work done in 2020, which focused on expanding and proving up the continuity of the resource on the Taurus target.

The work at Taurus in 2020 proved that further infill drilling may increase Taurus’s million-ounce resource base as there is resource expansion potential in multiple directions laterally as well as repetition at depth.

This combination of higher-than-average grades at Sable and “in-line” grades over significant widths at Taurus bodes well for the growth potential on this known resource and definition of higher-grade domains within it.

Just as exciting, though, is the possibility of outlining a high-grade underground resource at the South Cassiar target. This area has a history of small-scale production that mined gold veins averaging more than 14 g/t with areas of spectacular, multi-ounce mineralization.

It also comes with a wealth of data. As Gladwin notes, “This data legacy gives us a great exploration advantage, as modern software allows us to integrate large and diverse datasets into geological models that frame our targeting work.”

Since exploration at South Cassiar was historically concentrated close to the mines, areas outside them were often poorly explored.  As commented by Rhys, “several veins remain open for exploration, and there is high potential for additional veins below and outside the areas of previous focus.”

Roque and his team believe this evidence of a high-grade system at South Cassiar, if it proves out at scale, could spark a rerating in the company’s valuation.

Cassiar Gold has a busy year ahead

That’s where Cassiar’s focus will be in 2021. Building on a rich databank of past work, including last year’s effort, the company plans to drill 15,000 m this year starting in early June.

This effort will include 3,000 m to upgrade and expand the million-ounce resource at Taurus and 12,000 m to chase high-grade gold at South Cassiar South. This process will start by refining drill targets on both areas in Q1, followed by the opening of camp in late May and drilling for four to five months.

Roque is particularly excited about the work at South Cassiar, explaining, “We’re going to be stepping out and drilling into high-grade vein targets. This could be a really transformational year.”

Even before the drills begin turning, he sees Cassiar Gold as undervalued relative to peers based on the known, near-surface gold resource at Taurus, the resource’s strong gold recoveries, excellent supporting infrastructure, and the potential for the district-scale project to grow into a multi-million-ounce resource via exploration.

If gold prices cooperate later this year, the stage is set for Cassiar Gold to take full advantage.

To learn more about Cassiar Gold, visit their website here.

Follow Cassiar on social media for the latest news and updates: