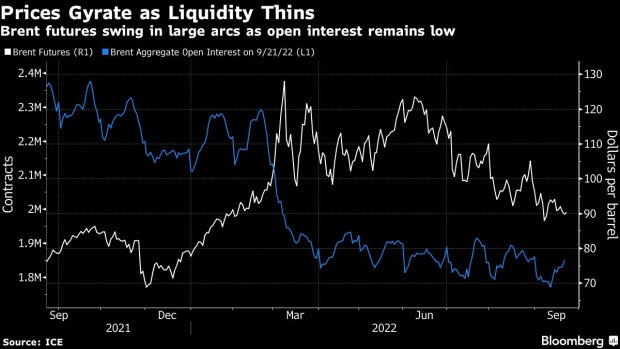 (Bloomberg) -- Oil is set to rebound in the fourth quarter, according to some of Wall Street’s leading banks, as low inventories and sustained demand underpin a recovery despite growing concerns of a global slowdown.

JPMorgan Chase & Co. forecasts London’s Brent oil at $101 a barrel for the final three months of 2022, while Goldman Sachs Group Inc. sees $125 and Morgan Stanley targets $95. The global crude benchmark was last near $90.

Oil markets have had a tempestuous year, roiled by the war in Ukraine, a raft of sanctions that are recasting energy flows and, more recently, aggressive central bank tightening to restrain inflation. The outlook for the balance of the year and into 2023 will be among the chief topics at next week’s Asia Pacific Petroleum Conference in Singapore, a leading industry gathering that’s back to an in-person format for the first time since the pandemic erupted.

Crude sank by more than 20% in the third quarter as macro-economic concerns proliferated and Federal Reserve rate hikes lifted the dollar to a record, posing a headwind for commodities. The coming three months may be equally challenging with European Union sanctions on Russian flows set to tighten and the US leading a bold plan to cap the price of Moscow’s oil. At the same time, the Organization of Petroleum Exporting Countries has hinted at supply cuts.

“We’ve had a very tight picture over the summer, where every single indicator suggested a very bullish market,” Martijn Rats, global oil strategist at Morgan Stanley, said in an interview. “Prices had risen due to the post-Covid demand recovery, and we had the supply side not recovering fast enough in tandem.”

APPEC, as the event is known, brings together a host of oil traders, producers, refiners, analysts and brokers, both for daytime discussions and, traditionally, a series of glitzy parties at the city-state’s top restaurants and bars that last well into the evenings. Among this year’s high-profile speakers is Russell Hardy, chief executive officer of Vitol Group, which will be bringing its reception back to the iconic Raffles Hotel after a hiatus.

Aside from the immediate outlook for prices, the event will also zoom in on the energy transition, Europe’s gathering energy crisis as Russia chokes off flows of gas, and the long-run consequences of underinvestment in hydrocarbons.

There have been “years of underinvestment,” said Parsley Ong, head of Asian energy and chemicals at JPMorgan. “In the US, we aren’t seeing rig counts high enough to offset natural decline rates -- drilled-but-uncompleted wells are at the lowest since 2014 -- while OPEC spare capacity is very thin.”

The supply constraints meant that as the world came out of the pandemic-induced slump, reserves were drawn down to feed growing oil appetite. That means the market doesn’t have a buffer to absorb much further growth.

“The consequence of global inventory drawdowns is that once demand picks up, the upshot in prices will happen all over again,” Morgan Stanley’s Rats said. “For now, demand has taken a step back, but the supply picture hasn’t changed that much; the supply ceiling is not that far away at all. As soon as demand picks up, we will have the same price pressures in the market again.”

“Fundamentals point to a deficit in the oil market, yet prices are not necessarily reflecting that deficit, one of the reasons being the strong US dollar,” JPMorgan’s Ong said. “So in that sense, the futures market might not fully reflect the tight fundamentals.”

Morgan Stanley’s Rats took a different tack, however. “It’s true that liquidity is quite low, and thus the volatility is unusually high,” he said. “However, what I don’t think is the case is that the broad level of prices is disconnected from the fundamentals. Brent at around $90 is broadly reflective of the fundamentals. So, no, the futures market isn’t broken.”