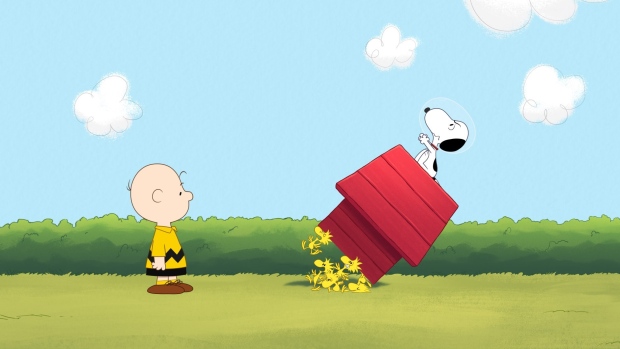 An image from WildBrain's series "Snoopy in Space" on Apple TV+ is seen in this handout photo from WildBrain via The Canadian Press.

YouTube's new rules for kid-oriented advertising will slow WildBrain Ltd.'s revenue growth this year, but that will be somewhat offset by the Canadian animation company's success with ad-free streaming services such as Apple TV Plus.

The Halifax-based company, formerly called DHX Media, said Thursday its WildBrain Spark operation had a 40 per cent year-over-year revenue decline in the first weeks of 2020 year due to changes at YouTube that took effect in January.

Prior to the change, WildBrain Spark's revenue for the second quarter ended Dec. 31 had been up 21 per cent year-over-year to $24.2 million, while views were up 36 per cent to more than 9.9 billion.

"We expect the changes they've introduced will improve the quality of the content that's viewed and, in turn, create new opportunities for advertisers who are finding it increasingly difficult to reach younger audiences on television," WildBrain chief executive Eric Ellenbogen said Thursday.

"In the short term, however, we're in a period of transition."

WildBrain Spark produces programming geared to children under 13 that's distributed largely through advertising-supported social media platforms such as YouTube and its YouTube Kids — both affiliates of Google.

Google agreed in September to pay the U.S. Federal Trade Commission US$136 million and New York state US$34 million to settle charges of violating children's privacy by tracking their use of YouTube programming without parental consent.

It also agreed to change its business practices for the made-for-children content on YouTube, which generates about US$15 billion of advertising revenue a year — about one-tenth of Google's overall revenue.

Ellenbogen, a former CEO of Marvel Enterprises who joined DHX in August and renamed it shortly afterwards, told analysts Thursday that he thinks WildBrain Spark still has a bright future in the long run.

"Our analysis indicates that kids content is the third-biggest genre on YouTube in terms of views and has been a very significant driver of YouTube's business," Ellenbogen said on a conference call

Ellenbogen said the removal of "interest-based" advertising that's targeted at individual viewers will mean there's new emphasis on advertising targeting a "context" — such as content, channel or program — rather than individual users.

"The way that made-for-kids advertising is sold in the future will share many similarities with the way TV advertising has always been sold and those are dynamics we understand well from our broadcast operations in Canada.

"We've been piloting direct sales of ads onto our WildBrain Spark channel in Canada and we've been achieving a significant price premium compared to interest-based ads, which reflects the quality of our content ... "

In addition to WildBrain Spark, the company also creates and distributes a variety of programming through conventional cable distributors, broadcasting companies, and streaming services including Netflix.

One of the programs that Ellenbogen highlighted was a Netflix exclusive preschool series, Chip & Potato, which will go into a second season.

He also said the "Snoopy in Space" series created by WildBrain specifically for Apple is one of the most popular programs on Apple Plus TV — a streaming service launched last year.

"This is the first new global series for Peanuts in decades and we see this new content as a huge brand driver across consumer products, which has been the mainstay of the Peanuts business."

WildBrain's overall second-quarter revenue was $122.1 million, up four per cent from $117.0 million a year earlier.

This improved bottom line was partly due to a $22.4-million positive impact from unrealized foreign exchange gains and $5.7 million from higher gross margins.