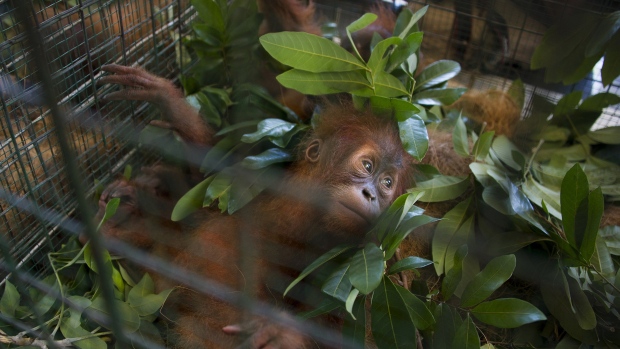 A seized baby orangutan is seen at a police station in Banda Aceh on August 2, 2015. , CHAIDEER MAHYUDDIN/AFP/Getty Images

Ali Ahamed’s black satchel was overflowing with turtles, their tiny heads poking out. Just a few feet away, on the hotel room floor, roughly 20 larger turtles with dark brown shells were removed from black suitcases and flipped onto their backs to keep them from crawling under the couch.

Ahamed had arrived in Kuala Lumpur, Malaysia’s capital and a popular stop for animal traffickers, from India a few days earlier to meet with his buyer, who had discovered the turtle broker through Facebook Inc.’s social network months earlier. The two negotiated a sale on Facebook Messenger. The 55 turtles in his bags included red-crowned roofed turtles, known for their brightly colored necks, and black spotted turtles with little yellow dots on their shells. Both species are endangered, and both have become popular pets in mainland China and Hong Kong.

Ahamed smiled as he showed off the loot to a man in shorts and a gray T-shirt, according to a video of the encounter posted online. The hotel-room exchange was a chance to cash in – a single red-crowned roofed turtle can fetch more than US$1,500 on the black market. For the buyer, an undercover investigator working with local authorities and the Wildlife Justice Commission, it was an opportunity to rescue dozens of freshwater turtles and put a key wildlife broker behind bars. After inspecting the goods, the buyer left the room and returned with police, who burst in and arrested Ahamed on the spot.

The sting was possible because of Facebook (FB.O), which investigators used to discover, track and communicate with Ahamed, who ultimately was sentenced to two years in jail. But Facebook also helped to create the problem – the social network’s massive reach has made it an attractive tool for animal traffickers, and simultaneously made it difficult for the company to monitor and block them. Facebook, which didn’t participate in the turtle bust, does take down posts when they’re reported, but until recently has done little to actively hunt them down and halt the trade on its own. That’s allowed illegal wildlife sales to persist on Facebook and Instagram, according to conversations with close to a dozen researchers and academics.

Social networks and online marketplaces have long been hubs of illegal activity, including exotic animal trafficking. Smugglers use the platforms as digital billboards, often sharing photos and videos of their merchandise for users around the world to see. On Facebook and Instagram, it’s common for traffickers to post their WhatsApp or WeChat numbers alongside their goods, a signal to prospective buyers to connect in a more private forum. From orangutans and cheetah cubs to opioids and ancient Middle Eastern antiquities, if something can be sold illegally, researchers say, it’s likely being sold somewhere on Facebook or Instagram.

“If there were T-Rexes alive, they would be selling them,” said Patricia Tricorache, an assistant director of the Cheetah Conservation Fund.

Now, as Facebook embarks on a shift to more personal communications and private-group activity, it’s poised to get worse. That’s giving advocates a sense of urgency about getting the social network to crack down on the black-market trade before it becomes even tougher to track.

“We’re in the middle of a big storm about what social media should be responsible for on their platforms,” said Tim Mackey, a professor at the school of health sciences at the University of California, San Diego. “Animals are dying in the field, and their platforms are being used to facilitate that trafficking.”

Mackey has spent much of the past year studying the trade of illegal goods on Facebook and Instagram, and recently published a paper about drug sales on Instagram. Now he’s researching the sale of illegal wildlife products – like rhino horns and endangered turtles -- specific to Chinese buyers and sellers.

Accurate data on trafficking is sparse given the secretive nature of the business, and private groups on Facebook make it even harder to quantify. Operation Dragon, a two-year effort from the WJC that was highlighted by National Geographic in 2018 and included the Malaysian turtle sting, came across more than 20,000 turtles and tortoises for sale, worth more than US$3.2 million. “It was noted that on social media platforms like Facebook there was a significant amount of open and aggressive trader traffic posted,” read the report from WJC, an international foundation.

The International Fund for Animal Welfare recently looked at social media sites like Facebook and Instagram as part of a separate wide-ranging report on animal trafficking published in 2018. Over a six-week period covering posts from just four countries, IFAW found 275 listings selling endangered or threatened wildlife or wildlife parts on the two services – a small number, but one that didn’t include any posts that may have been part of private Facebook groups. “It should also be noted that had ‘closed’ groups on Facebook been included in this research, levels of trade discovered on social media could have been significantly higher,” according to the report.

Facebook’s unintentional role in facilitating these kinds of transactions is troubling to researchers, many of whom are banding together to share resources and drive awareness. Mackey is part of a new organization called the Alliance to Counter Crime Online or ACCO, a coalition of researchers and academics focused on fighting internet traffickers, specifically on Facebook and Instagram, which it calls “ground zero” for online organized crime.

Dan Stiles, an ACCO member and independent researcher in Kenya, has studied the illegal wildlife trade since 1999 with a focus on great apes. He’s penned reports on the illegal ape trade for numerous wildlife organizations, as well as the United Nations. In late 2016, he even orchestrated a sting operation carried out on Facebook and WhatsApp to help nab a trafficker selling two baby orangutans in Bangkok.

Stiles echoed what many other researchers said: Facebook doesn’t do enough to proactively search for these kinds of posts, which serve as organic ads for traffickers’ merchandise. Instead, its approach has been to remove the posts once others flag them – but even that can pose a dilemma. Removing the posts means eliminating evidence that law enforcement and researchers can use to monitor these traffickers.

“They’re not actually looking for it themselves,” Stiles said, “because they would have closed down a hell of a lot more [accounts] by now if they were.”

Tightening an earlier policy that had forbidden the sale of endangered animals, Facebook in May banned the peer-to-peer sale of all animals, from rare freshwater turtles to puppies. “This policy is allowing us to go very aggressive and be able to remove these live animals,” said Max Slackman, a policy manager at Facebook. The earlier policy was so hard to enforce that the company scrapped it, he said. “At the scale that we operate, training our review teams to identify every single endangered animal is just impossible,” he said.

The company does not, however, actively search for posts that promote the sale of animals on Facebook or Instagram. It uses machine learning to detect posts that include animal cruelty or graphic images, which can lead to the removal of some trafficking posts, Slackman said. But the majority of posts Facebook takes down have been flagged by users, researchers or advocacy organizations.

Still, Facebook says it’s getting better at finding and removing other kinds of illegal activity. In a recent content report, Facebook said it removed more than 1.5 million posts promoting the sale of drugs or firearms in the first three months of the year. It was the first time Facebook shared a metric highlighting the removal of “regulated goods,” and executives say they want to report other, similar kinds of takedowns in the future.

“The hope eventually is that we will have strong information on [animal trafficking] as well as other regulated goods sales,” Slackman said.

Tania McCrea-Steele may be one of the few wildlife researchers who’s confident that Facebook will tackle this problem. McCrea-Steele is a project manager at the International Fund for Animal Welfare, where she focuses on rescues and conservation. She pointed out that both Facebook and Instagram recently joined the Coalition to End Wildlife Trafficking Online, a global group of tech companies pledging to cut online animal trafficking by 80 per cent by the end of 2020.

“They do have a really strong wildlife [trafficking] policy in place,” she said of Facebook. Other online marketplaces are particularly popular in Europe, she says, and popular internet services in China are also an issue.

Social media still poses challenges, she said. Closed groups are hard to infiltrate, and monitoring private conversations, even those that are unencrypted, raises privacy concerns.

That may be one of Facebook’s biggest issues moving forward. As the company pivots away from public sharing and moves toward encryption, even Facebook won’t have access to private communications sent through its network. It already owns one encrypted messaging service in WhatsApp, and Messenger and Instagram will also encrypt all messages sometime soon. The three services have more than a billion users each. On a recent conference call with reporters, Chief Executive Officer Mark Zuckerberg conceded that Facebook’s plans for privacy will have trade-offs. Facebook can only fight what it can see.

“We recognize it’s going to be harder to find all the different types of harmful content,” he said. “It’s not clear on a lot of these fronts that we’re going to be able to do as good of a job on identifying harmful content as we can today.”

Gretchen Peters, a security expert and former journalist who founded the ACCO, hopes that Facebook will ultimately be regulated and punished for all kinds of illegal transactions on its network. She’s broaching the subject with U.S. lawmakers and says she’s had meetings with staffers for numerous congressional committees, including the Senate and House Judiciary Committees. Peters believes Facebook is profiting off this illegal activity: The company makes money when people spend time using the service, she says, even if that time is spent trafficking illegal goods.

“I have zero faith whatsoever that the firms are going to do this on their own,” said Peters. “None of us are anti-privacy,” she added. “But we can have better [privacy], and not have it mean children get trafficked, and drugs get sold, and elephants and apes and cheetahs get wiped out. Those things don’t have to be mutually exclusive.”