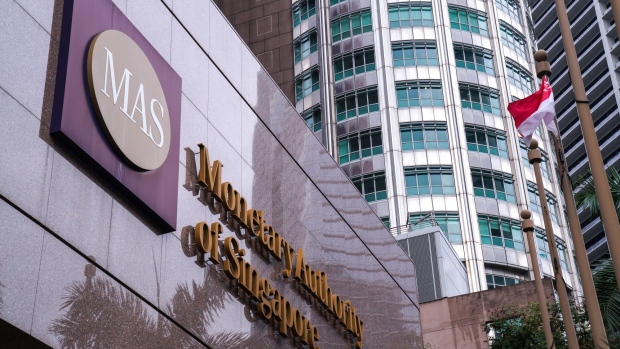 Signage for the Monetary Authority of Singapore (MAS) is displayed outside the central bank's headquarters in Singapore, on Tuesday, Oct. 22, 2019. Singapore's economy may be a few quarters away from a recovery as the decline in trade and manufacturing this year hasn't really spread to other sectors, the central bank's chief said. , Bloomberg

The Monetary Authority of Singapore and the Accounting and Corporate Regulatory Authority are collaborating with the Singapore Police Force’s Commercial Affairs Department, which already has an ongoing criminal investigation into Wirecard, the MAS said in a statement late Monday.

“MAS has been in touch with relevant financial institutions to determine if there had been any abuse of Singapore’s financial system for illicit purposes,” it said. “We will take firm action if we find evidence of criminal behavior or serious lapses in anti-money laundering controls.”

Wirecard filed for court protection from creditors in Germany last week following revelations that 1.9 billion euros ($2.1 billion) was missing from its balance sheet. The MAS has told Wirecard’s local entities to ensure that all customer funds from its domestic payments processing business in Singapore are kept in local banks.

“MAS requires financial institutions to report all suspicious transactions, including transactions that are large, complex or present unusual patterns with no apparent economic or lawful purposes,” it said.

Singapore is home to Wirecard’s Asia-Pacific headquarters and the company has been expanding aggressively in the region. Its primary business activities in the country are to process payments for merchants and help companies issue prepaid cards.

Last year, Singapore police raided Wirecard’s local offices after an employee in the city-state alleged that a member of the company’s finance team engaged in accounting breaches.

The probe by the CAD -- the police’s financial crimes office -- began in February 2019 and is “extensive and ongoing,” the MAS said in the statement. The monetary and accounting authorities will work with the CAD to examine “other possible aspects of the case,” it said. Authorities have reached out to counterparts abroad and stand ready to assist them.