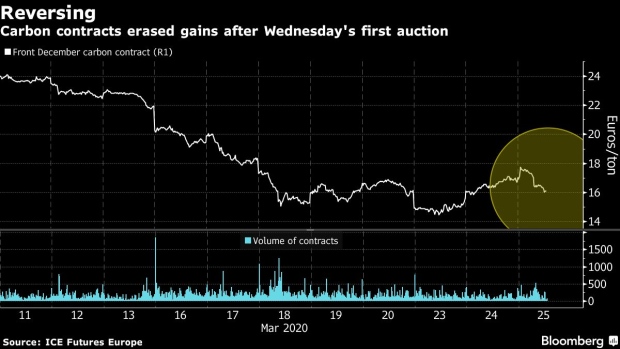 (Bloomberg) -- Airlines pulled back from bidding in the European Union’s auction for permits covering greenhouse gas pollution, another indication that demand for energy is dropping rapidly.

None of the four bidders for carbon emissions allowances were successful in a contest run by ICE Futures Europe on Wednesday. It was the second auction failure in a little more than a week.

With many flights grounded and carbon prices on the slide, demand for the securities is weakening. Thousands of industrial sites, power generators and airlines buy the credits to cover their greenhouse-gas pollution. But with the economy and energy use weakening, their need for carbon allowances is declining too.

The auction failed because there weren’t enough bids to cover the supply being offered, ICE said. Airlines have been some of the hardest hit businesses during the coronavirus crisis, with Ryanair Holdings Plc, Lufthansa AG and British Airways canceling flights as restrictions related to the health crisis spread.

The contest on Wednesday was further complicated by the expiry of March options and by the scale of another auction held earlier in the day.

Poland auctioned 5.3 million tons of allowances on the European Energy Exchange on Wednesday morning, and demand barely exceeded supply. Together, the permits on sale were more than double the normal daily size of 3.1 million tons.

The current price of carbon is about a quarter lower than it was two weeks ago, and there’s little indication of a demand boost while much of Europe’s economy remains on standby.

An auction on March 17 was canceled because the total volume of bids fell short of the volume of available contracts, the first failure since June.

“Seeing a bloodbath on the market as we’ve seen the past few days, makes it difficult to assume the point that people get back in with large volumes,” Marcus Ferdinand, head of European power and carbon analytics at research company ICIS, said in a phone interview before the latest result.