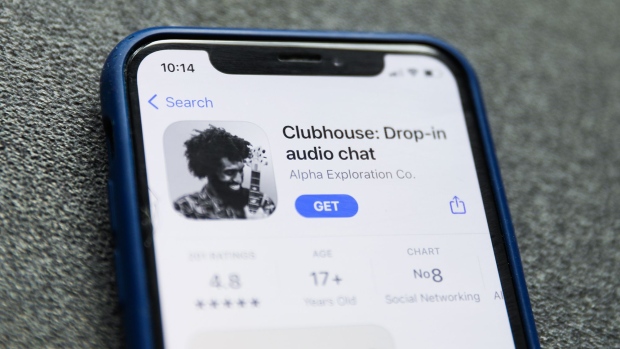 Celebrities and tech luminaries turned Clubhouse into the surprise hit of 2021 by letting loose on a freer, more casual audio format. A growing number of big-name investors now hope to replicate that phenomenon in a far more unlikely arena.

The venture capital houses behind some of China’s biggest social media smashes are looking to offer millions to untested Clubhouse wannabes that’ve sprung up in past months. Tencent Holdings Ltd. and Alibaba Group Holding Ltd. have begun testing audio-only chats in their platforms. Even smartphone maker Xiaomi Corp. is now toying with the concept. All are looking for the next decacorn or US$10 billion hit -- sightings of which have been few and far between in a WeChat-dominated arena -- and risking Beijing’s ire.

The Clubhouse model has caught on organically in China since Elon Musk supercharged the original app’s popularity, in part because its exclusivity and audio-only format seem to thwart surveillance. Beijing, ever worried about the conversation spiraling out of its control, has since banned the app -- but to aspiring entrepreneurs and their backers, that only creates a vacuum for a savvy operator to exploit. The Chinese social media scene is long overdue for an upstart disruptor -- even if it’s copied off a Western concept initially.

“We see a turning point every couple of years,” said China Creation Ventures founder and managing partner Zhou Wei, who made an early bet on US$1.5 billion podcast network Ximalaya while at Kleiner Perkins. “Clubhouse has the potential to become a US$10 billion company. Even the smallest teams would have a chance in China as long as they can stay patient.”

Dizhua is one such Clubhouse contender. Launched in mid-2019, the app -- its name evokes someone raising their hands -- has some 10,000 daily active users sending virtual gifts or posting messages to speakers in its chat rooms, with topics ranging from pets to pop culture.

Thanks to the Clubhouse buzz, its developers are starting to gauge investor interest in a pre-A funding round that could raise as much as 50 million yuan (US$7.7 million). Over 10 funds have expressed interest, and the company has already held follow-up discussions with about half of its suitors.

“It could be the next big wave of the internet, so everyone is willing to take a leap of faith,” said Li Awei, Dizhua’s operational head. “If we don’t get a cash injection fast and spend it on R&D and marketing, we’ll get eliminated.”

Like Dizhua, 25-year-old app maker Joshua Meng drew interest only after Musk’s endorsement of Clubhouse. The Shanghai entrepreneur first tried to model his five-person project Juju (meaning Together) after Discord, before revamping it along the lines of the U.S. app last year. No one returned his calls until February, when offers suddenly flooded in and reached US$1.5 million. But it was too late, Meng had by then decided to throw in the towel and move on.

“China doesn’t have its own A16Z,” said Meng, referring to Clubhouse investor Andreessen Horowitz. If there isn’t a direct analog from Silicon Valley, he said, “Investors would give you a death sentence once you say you are doing social.”

Meng’s experience is a reminder of the harsh realities of China’s startup industry, where investors and corporations like Alibaba and Tencent tend to gravitate toward proven business models from Silicon Valley rather than untested innovations. The country’s No. 1 social app WeChat was originally inspired by WhatsApp and even ByteDance Ltd.’s TikTok, hailed as China’s first truly global internet product, was created through an acquisition of the Musical.ly video platform serving American teens.

The dominance of Alibaba and Tencent has also meant a sizable proportion of VC funds flow to the startups they back. Chinese tech startups attracted some US$25 billion in 2020, a fifth of which were invested in companies associated with the two giants, according to data from Preqin. 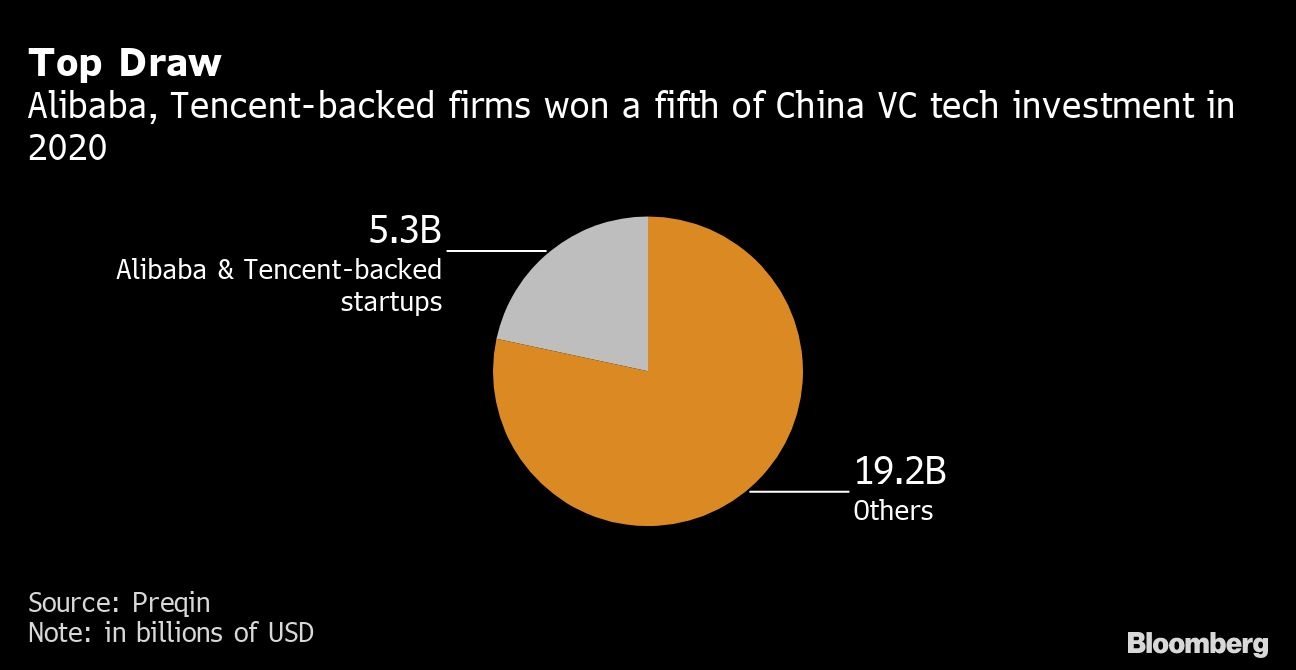 The odds are against the country’s upstarts as better-capitalized tech giants like Xiaomi and Kuaishou Technology roll out their own Clubhouse-like products. Tencent’s WeChat has started allowing users to connect with a live-streamer’s feed with audio-only chats. Even Alibaba, which dabbled in social over the years, tested a function called MeetClub inside its work app.

First-mover advantage is key, as wannabes with names like Clubhorse and Clubtalk enter the fray. Aiding the rush is Shanghai-based Agora Inc., which sells the template to build the real-time communication functions inside Clubhouse and most of its Chinese clones. With Agora’s help, Beijing-based startup JingData crafted its own version of Clubhouse in less than 10 days. Its Capital Coffee app has attracted some 20,000 users, mostly from China’s venture capital community, said JingData Chief Executive Officer Chai Yuan.

“You don’t see American social products change too much over the years, whereas Chinese ones fail fast, learn fast and improve fast,” said CCV’s Zhou.

Like Clubhouse, these up-and-coming apps face the risk of Beijing cracking down at any moment. Authorities recently summoned 11 firms including Alibaba, Kuaishou, ByteDance and Tencent over the use of audio-based social media and deep-fake technologies, asking them to review and report on online services that have the ability to shape or mobilize public opinion.

Developers like Capital Coffee’s Chai are taking steps to ensure they don’t run afoul of censors. “We are working to improve our content moderation and will launch a report feature in the app,” he said before the recent scrutiny. “The bottom line is that no user will be able to spread illegal content on our platform.”

Policing content is less of a problem for Chinese podcast company Lizhi Inc., which is targeting the audio-only social networking space globally. Its Tiya voice app focuses on party and gaming fanatics and is likely to go up against Clubhouse eventually as it expands beyond its core following, said Lizhi Chief Executive Officer Marco Lai. As of mid-February, Tiya had garnered 6 million global downloads versus Clubhouse’s 8 million, according to App Annie data.

Some of the investors now taking an interest in the sector say they aren’t looking for carbon copies of Clubhouse. Instead, entrepreneurs should develop their own understanding of the audio app and make tweaks in areas like use cases and designs, said Wu Jing, a partner with Qiming Venture Partners, which has previously backed local social-media hit Bilibili Inc.

“To give but one example, why doesn’t Clubhouse have a function for recording? Different teams should have different answers to that,” she said. “You don’t have to be China’s Clubhouse.”