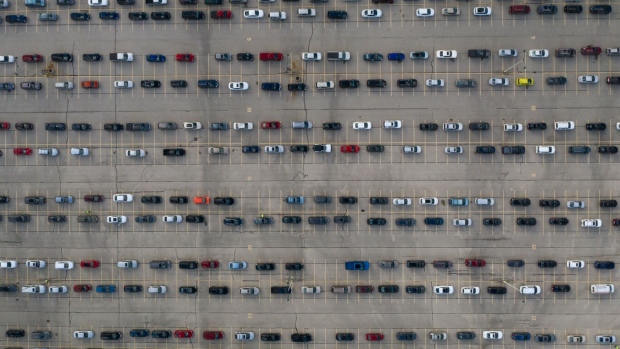 With a Covid vaccine months away and a distracted, lame-duck president, governors are stirring as America’s first line of defense against the pandemic’s winter onslaught.

The pending departure of President Donald Trump, who has scoffed at the disease’s potency, could provide cover for strict new measures. The Republican leaders of Nebraska, Maryland, Utah, Ohio and Iowa tightened virus restrictions for their states this week, and Democrats warned residents of difficult months ahead. Many have little choice but to act, as the virus sets daily records and reality sets in among constituents.

“We may see governors that haven’t been as aggressive forced to take actions they haven’t wanted to,” said Marcus Plescia, chief medical officer of the Association of State and Territorial Health Officials. “The big thing that’s going to come up is when hospital systems begin to reach capacity. That’s a very dangerous situation that no one wants to find themselves in.”

Governors face wrenching choices in gathering and apportioning supplies and an eventual vaccine, keeping economies on life support and cajoling voters to wear masks and stay home -- again. Public-health experts and some state officials said President-elect Joe Biden could take some of the burden when he assumes office Jan. 20, having made a strong national response his main issue.

On Wednesday night, Ohio Governor Mike DeWine, a Republican who has drawn praise for his aggressive response to the pandemic, toughened the state’s mask mandate. Store owners will be held responsible for ensuring that all customers and employees wear them, he said. The governor also banned dancing, games and congregating at events like wedding receptions.

“I’m tired of all this Covid. I know you’re tired,” DeWine said in a statewide address. “This pandemic gives each of us a chance to serve a higher cause, a more noble purpose than just ourselves.”

Podcast: A wide-ranging discussion with Bloomberg reporters on hope for a vaccine

The Trump administration has been widely criticized for shirking a leading role in combating the pandemic, leaving states fighting for resources and formulating different policies for a national crisis. But about 72 million people voted for Trump’s re-election, to Biden’s 77 million, and the path ahead is fraught. Some hard-liners, however, are softening.

Iowa’s Republican Governor Kim Reynolds, who has opposed a statewide mask requirement, told citizens Tuesday that their health-care system was on the brink of collapse. More than 22,700 Iowans were diagnosed with Covid-19 in the past week and nearly half of its daily tests return positive, a rate second only to South Dakota, according to Johns Hopkins University.

Reynolds set mask and social-distancing rules for indoor gatherings of more than 25 people, large outdoor gatherings and salons and tattoo parlors, and said she would put more in place if needed.

“Iowa is open for business and we intend to keep it that way,” she said. “That’s why it’s time for these additional mitigation measures.”

Lori Tremmel Freeman, chief executive officer of the National Association of County and City Health Officials, said that taking the politics out of public health is essential, because the disease won’t wait for the inauguration.

“We have to turn this corner on public trust,” she said. “We have to do that like, yesterday, because that is what is holding us back.”America’s Covid-19 cases have steadily climbed since September. About 123,000 were recorded each day over the past week, on track to double summer highs. Almost 62,000 patients were hospitalized Wednesday, a record that represents a 40% increase from two weeks ago, according to the Covid Tracking Project.

With more than 10 million cases and 240,000 deaths, the U.S. response has stood out on the world stage as ineffectual and scattershot. A vaccine from Pfizer Inc. may arrive this spring, but the fractious presidential transition means governors may have a major role in deciding who gets it and when.

New York Governor Andrew Cuomo, a Democrat who chairs the National Governors Association, said Monday that his peers are discussing how to improve Trump’s distribution plan “before it does damage.” He said that the approach relies on private providers like hospitals and pharmacy chains, bypassing hard-hit communities that lack health-care infrastructure.

“We can’t let this vaccination plan go forward the way the Trump administration is designing it,” Cuomo said. “Biden can’t undo it two months later. We’ll be in the midst of it.”

It’s not just Republicans who must grapple with the surge. Cuomo, New Jersey Governor Phil Murphy and Minnesota’s Tim Walz announced tough new restrictions this week, including for bars and restaurants. Wisconsin Governor Tony Evers warned that increases “rival what we saw in New York City this last spring” and advised residents to stay home. Democratic governors like Michigan’s Gretchen Whitmer who imposed aggressive rules have been targets of Trump and his supporters.

The president presented a false choice between total lockdowns and nothing, said Harry Heiman, a clinical associate professor at Georgia State University’s School of Public Health. Biden’s victory -- and Trump’s all-consuming attempt to invalidate it -- may free governors of both parties from the terror of a presidential tweet.

“There is significant relief from governors and public-health directors, because frankly they need the help,” Heiman said. “They welcome support from President Biden, whether that’s what they are publicly messaging right now or not.”

“It is time for the divisiveness to end, and for all of us, as Utahns, to unite in making whatever sacrifices are necessary to help our neighbors and to bring healing back to our state,” said Herbert, whose state voted 58% for Trump on Nov. 3.

State Epidemiologist Angela Dunn and Erin Mendenhall, mayor of Salt Lake City, praised the move, but about 50 protesters gathered at the governor’s mansion, the Deseret News reported. One of their signs: “Our immune system is our God given PPE.”

In North Dakota, where hospitals are at their limits and the state is moving to let positive-but-asymptomatic caregivers keep working, Republican Governor Doug Burgum put out only voluntary recommendations Monday.

The town of Edgeley has passed its own mask mandate. Three-quarters of voters in surrounding LaMoure County moved to re-elect Trump last week, but cases have been raging since a nursing home outbreak in October.

Edgeley, which has fewer than 600 residents, passed its measure on Nov. 2, the day before Election Day.

“People definitely wish there was a statewide mandate, and even more leadership from the federal government,” said Michelle Berry, a member of Edgeley’s council. “North Dakota is definitely to the right. Our local government just set that aside, though, and looked at our community and how important it was to take care of the health of our community.”