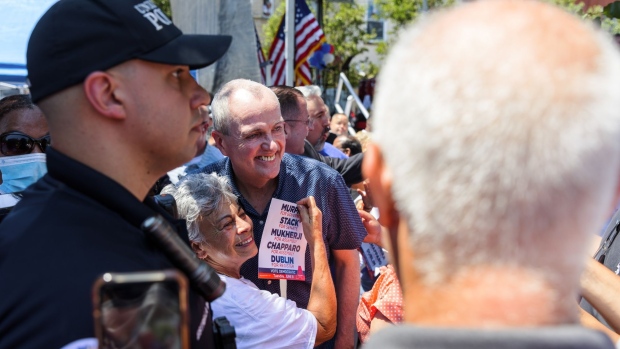 Phil Murphy, center, takes a photograph with supporters during a 'Get Out The Vote' rally in Union City, New Jersey, on June 5. , Bloomberg

(Bloomberg) -- New Jersey Governor Phil Murphy, who swiftly issued some of the nation’s toughest pandemic safety orders, is taking a more cautious approach on reinstating them as Covid-19 cases rise during his re-election campaign.

Voter approval of Murphy, a 63-year-old Democrat running for a second term in November, soared to a record thanks to his handling of the pandemic: He led the state to beat its deadline to vaccinate 70% of the adult population, a mark the U.S. as a whole didn’t hit until Monday. Murphy lifted most restrictions in June, amid lower deaths, hospitalizations and infection rates.

Since then, the delta variant has swept the U.S., elevating Covid cases and mortality. The federal Centers for Disease Control and Prevention advises mask-wearing in risky U.S. regions -- including in 20 of New Jersey’s 21 counties -- but Murphy has refrained from reinstating his 2020 statewide order.

“We strongly encourage you to mask up,” he said on Aug. 2.

Murphy, who worked closely with Cuomo on safety policy early in the pandemic, on Tuesday joined de Blasio, President Joe Biden and others calling for Cuomo to resign amid state Attorney General Letitia James’s report accusing New York’s governor of sexually harassing multiple women. Cuomo denies the findings and has refused to step down.

On Covid-19 in New Jersey, Murphy is taking a piecemeal approach, requiring shots or testing of employees of state-run hospitals, jails, veterans homes and other congregate settings. He urged private health-care institutions on Monday to demand the same. Murphy said he would get tougher if need be.

“The governor is worried about overreaching in an election year,” said Bruce Afran, an attorney for parents and children who sued the Murphy administration in federal court July 9, claiming that schools’ pandemic safety steps are violating constitutional rights.

At a bill signing on Wednesday in Union City, onlookers included vaccine protesters, whom Murphy called “the ultimate knuckleheads.”

“Because of what you’re saying and standing for, people are losing their life,” he said. “Look in the mirror.”

Murphy acknowledges that the increases are startling: Hospitalizations over the past week, for instance, have risen 26%. But the 598 on Aug. 3 was nowhere near the 2,252 on April 3. For the week ended July 19, 95% of hospitalized patients had either no or partial vaccinations, he said.

“Politics has nothing to do with it,” Murphy said of his order’s limited scope. “It’s the CDC’s recommendation -- we’re not taking a mandate of theirs and watering it down. If it turns to needing to mandate, we will.”

While Democratic-led states and cities have been tightening restrictions, leaders in two Republican states -- with some of the nation’s highest Covid-19 transmission rates -- did the opposite July 29. Texas Governor Greg Abbott forbade businesses to require masking and vaccination proof, and Florida’s Ron DeSantis prohibited schools from requiring masks.

Still, Murphy is taking a gentle approach as he tries to defy recent history.

While Murphy, a former Goldman Sachs Group Inc. director, based his first campaign on bringing back the middle class, he’s adding the themes of resiliency and recovery to this run, with the pandemic the primary focus.

Patrick Murray, director of the Monmouth University Polling Institute, said Murphy has little to fear from anti-mask activists. His own base has supported his mandates, but could turn away if numbers go in the wrong direction and Murphy doesn’t act, Murray said.

“If he institutes a mask mandate and cases stay high for a while, his base will say he did the right thing,” Murray said in an interview.

Some local officials are making their own decisions. Summit is urging the use of masks in municipal buildings while they’re required inside property owned by neighboring Millburn, another residential haven for New York City commuters.

In the state capital, Trenton’s public library -- closed during the last week of July for deep cleaning and staff virus testing -- has mandated masks and distancing for everyone over age 2. All over the state, school districts are devising plans for a return to in-person instruction in September with whatever precautions they deem necessary to protect 1.4 million children.

Afran, the Princeton lawyer suing the administration, said that allowing schools to set their own rules shows the governor is acting arbitrarily.

“The fact that the governor decided they don’t have to be applied everywhere means there’s no justification anywhere for this,” Afran said. In the lawsuit, the plaintiffs say the masks, desk dividers, social distancing and other tools inhibit communication, cause anxiety, limit social development and violate privacy.

In New Jersey, whose vaccination rate hit 70% on June 18, almost two weeks earlier than planned, Murphy and Ciattarelli will begin campaigning heavily after the Labor Day holiday weekend in early September. At that point, New Jersey likely will continue to log growing Covid-19 numbers, according to Perry Halkitis, dean of Rutgers University’s School of Public Health.

“Things are going to get a little worse for a while, but ultimately better in the fall,” Halkitis said in an interview. “It’s never going to get bad, bad, bad.”