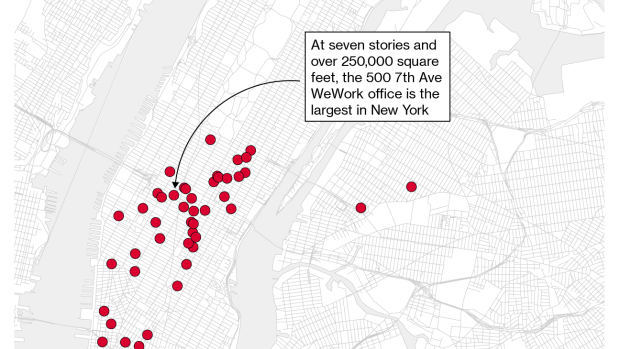 Across Manhattan and out into Brooklyn, kombucha was flowing.

For all the troubles at WeWork – its grandiose plans gone astray, a hoped-for rescue possibly underway -- the mood inside its New York office spaces is surprisingly upbeat.

We Co., as the co-working giant is now known, may look like the omnishambles of the unicorn generation of startups. But for now, at least, many of its tenants hardly seem to care. In fact, the reaction from more than 20 people who spoke with Bloomberg this week was a shrug that said, “Not our problem.”

The mood was presumably less sanguine at JPMorgan Chase & Co., which on Friday was said to be leading efforts to arrange $5 billion in financing to keep We afloat. Time is short. Without help, We could run out of money by late November.

The financing could start to come together as early as next week, but it may take longer for its structure and terms to be finalized, according to people familiar with the matter who asked not to be named because the talks are private.

We was one of the year’s most hotly anticipated initial public offerings before doubts about valuations and transparency ended with the IPO’s withdrawal and the company’s top executive losing his job. The fast-growing, money-losing startup had been counting on a stock listing -- and a $6 billion loan contingent on a successful IPO -- to meet its cash needs.

Now it will pay considerably more to borrow. One option that’s been floated is raising $3 billion or more of the debt package through the sale of high-yield bonds, some of the people said. Those would likely be priced at a premium to the yield commanded by WeWork’s outstanding bonds, which were issued with a 7.875% coupon and offer a yield of around 10%, some of the people said.

SoftBank Group Corp., the largest shareholder in WeWork, is currently in advanced talks to acquire more shares at a significantly lower valuation than the $47 billion WeWork had in January, said two people familiar with those discussions.

WeWork’s bonds, which traded above par less than a month ago, have plunged into distressed levels since then, dropping more than 20 cents on the dollar amid mounting concerns about the company’s cash situation before regaining almost half of that decline amid news of the debt talks. Fitch Ratings and S&P Global Ratings have cut WeWork’s credit grade further into junk on liquidity issues.

The potential financial fallout could be huge. JPMorgan has loans out to the company and its founder, while SoftBank has watched its investment plummet in value. But the implications for New York real estate are worrisome too. We became Manhattan’s biggest office lease holder, with more than 7 million square feet, partly because it was sometimes willing to pay above-market rents.

The company’s new co-chief executive officers have been moving to slash costs and spin off businesses in the past two weeks in an effort to slow its cash bleed. Analysts had previously estimated that the company would run out of money by the middle of next year.

In Manhattan’s financial district, We member Brianna Rowe, who has been there for four years, said the WeWork space was one of the perks of her job working for a nonprofit.

“It was just so cool, it was unlike anything I had ever really experienced before,” she said.

Nathan Lee Colkitt, who’s been renting We space for his architectural firm since 2010, said that as long as the place is kept up, he’s happy to stay put. We’s big selling point – flexibility -- has turned out to be a blessing for him, if a curse for WeWork.

“The very same thing that made them successful gives you the ability to jump at any month,” Colkitt says. “So that’s sort of ironic or coincidental.”

Rarely has so much gone so wrong so fast for a young company in the spotlight. We has raised more than $12 billion since its founding and never turned a nickel of profit. Now, its very future is in doubt. We’s travails are bound to shape investors’ views of other fast-growing startups hoping to go public.

From Midtown down to Gramercy Park, WeWork members said that for them, it was business as usual. At offices at 750 Lexington Ave., “Mean Girls,” the Lindsay Lohan comedy, was playing over and over on Oct. 3, known as “Mean Girls Day.” A puppy party broke out at 33 Irving Pl., with happy hour to follow, while the spaces at 880 Third Ave. featured a macaroni-and-cheese bar and massages.

For WeWork’s tenants, the financing negotiations and the scramble to cut costs went largely unnoticed or remarked upon.

Robert Snow, another We member, summed up the view: “As far as I can tell, it’s the same as it’s always been.”

--With assistance from Natalie Wong and Davide Scigliuzzo.

To contact the editors responsible for this story: Rob Urban at robprag@bloomberg.net, Dan Reichl