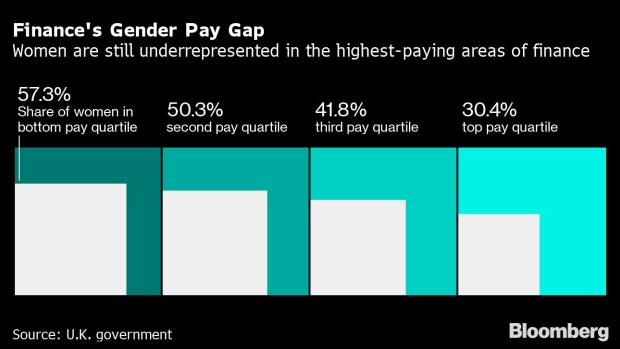 (Bloomberg) -- Camilla Sutton climbed through the ranks to become global head of foreign exchange at Scotiabank in Toronto. Along the way, she put up with being asked if she ought to travel while she had small children at home and being mistaken for a junior employee. And then there was the day when she was the only woman in a top-level meeting -- yet again.

Like many other women in the $6.6-trillion a day currency market, Sutton eventually left trading. She now works for a company aiming to improve gender diversity.

“Very senior women in the industry are going to be the only woman at the table at every table they’re sitting at,” Sutton said. “It becomes very tiring and exhausting for women who are at senior levels within the industry to continually be faced with the everyday microaggressions.”

For some female professionals, it’s worse than that. Chau Pham, a former Morgan Stanley vice president in foreign-exchange sales in the U.S., said in January she was fired without explanation 22 days after returning from maternity leave. Stacey Macken, a broker, won an employment suit in September against BNP Paribas SA in London after saying she was paid less than male colleagues. She found a witch’s hat on her desk on one occasion.

But it’s also the daily grind that wears women down. Whether it’s being interrupted constantly in meetings, getting short shrift in pay or working without female role models, current and former traders say the industry remains a tough place for women.

Banks say they are trying to hire and promote women, and several pointed to specific programs and goals. But upper levels of management don’t show it. None of the top 10 investment banks has a woman running global currencies trading, according to information provided by the banks.

Sutton and Catherine Flax, the former Americas head of foreign exchange and commodities at BNP Paribas, were among women highlighted in a Bloomberg story three years ago on the rise of female currency traders. Both have since left the industry.

Another departee: Meg Browne, who worked in foreign exchange for 30 years. She began as a trader at the Federal Reserve Bank of New York and then joined HSBC Holdings Plc and Brown Brothers Harriman & Co. in sales and research. She once accompanied colleagues to a strip club in the 1990s “because I didn’t know how else to network with my bosses.”

“My worry is that things have not changed,” she said. “It’s just more hidden.” She now works in the non-profit sector.

Cantor Saleswoman Found Feces in Her Mug, Wants Her Day in Court

Two women in the industry said that when they started in banking they were pushed toward sales rather than trading, a role seen as more traditionally female. Another said that while the bank where she worked talked up its diversity policies, her male colleagues said they didn’t see a problem with her being paid less than them. More than one man told her she was only there because she was female.

A fourth woman, who had been working in foreign exchange for almost a decade, said she left after taking a new role and being bullied and undermined by her male boss.

“I had a very hard experience,” she said. “I never quite recovered from it.” She runs her own company “so I never have to go back to that atmosphere.” Like the others, the woman asked not to be named for fear of how she’d be affected at work.

In the U.K., pay-gap disclosures unleashed by a new reporting requirement have put a spotlight on the lack of women in senior positions. Women make up more than 57% of the bottom pay quartile in finance and insurance and just over 30% of the top pay quartile, according to data compiled by Bloomberg from the latest set of disclosures, in April 2019.

HSBC Holdings’s gap actually widened in the second year of mandatory reporting in the U.K. Elaine Arden, group head of human resources, said in a June report that the lack of women at high levels within the banking unit had a “material impact” on those figures.

Sutton now works for Women in Capital Markets, which seeks to accelerate gender diversity in the Canadian finance industry. She said when she worked in currencies that there were many women around at junior levels, but as she moved up the ladder the women gradually disappeared.

“All of a sudden you put your head up and look around and go ‘Oh my gosh, where did all the women go?” Sutton said. “The days of a stripper walking onto a trade floor are completely behind us. There isn’t anything as obvious as that. What we face now are these somewhat subtle biases that are built into every single day.”

Flax felt she had to work more hours than others. She was conscious of being the only single mother on the trading floor and was determined people wouldn’t think she couldn’t do the job. She also saw the ranks of women thin out as she moved up the hierarchy but said she thought it was a choice people made.

“I had an opportunity to go back to running a trading business and I said no, because I had my own lifestyle decisions,” she said.

Flax is now a management consultant, board member and adviser for various organizations. One thing that would help, she said, is for banks to adopt more flexible ways of working. Average working hours vary bank to bank and between roles, but, according to 2018 data from banking forum Wall Street Oasis, the lowest on average is 54 hours and the highest 85 hours.

The Gender Pay Gap in Britain Gets Another Look: QuickTake

Banks say they are trying to attract more women. JPMorgan Chase & Co. has set up several internal programs aimed at attracting and retaining female talent, including an initiative that brings together male executives, called “allies,” to discuss how to retain and advance women. The company had a female co-head of currency trading until March.

Goldman Sachs Group Inc. said it wants women to make up 50% of its incoming analysts and has set up five onsite childcare centers around the world that open at the start of the trading day. NatWest Markets said that “as an industry, we should be striving to attract and develop the best people regardless of demographic.”

And Bank of America has a female head of global G10 FX options trading and a spokeswoman said the company’s management team is more than 54% women and/or people of color.

Finance firms are now so desperate for female candidates that several of the companies recruitment specialist Richard Hoar deals with are putting headcount aside so they can snap up senior women when they become available, he said. But it can be hard. A study Hoar conducted for a client in mergers and acquisitions showed the proportion of women at director and managing-director level within finance was as low as 11%, compared to 20% in consumer and health care.

Allyson Zimmermann, a former currency broker, sees some signs that companies are taking their responsibilities more seriously. She now is an executive director in Zurich for Catalyst, a nonprofit that seeks to improve workplaces for women, and said she rarely has to make that business case any more.

“I see pockets of evidence it’s getting better,” said Zimmermann. “With the Metoo movement, companies cannot deny that something isn’t right here. The evidence that I see is companies are asking how do we do this, rather than why.”

Still, a British government study into what stops women from progressing in the workplace, by the Global Institute for Women’s Leadership at King’s College London, found that 35% of the gender pay gap can’t be explained by the data. It could come down to factors including “discrimination, harassment, preferences, and choices (constrained or otherwise).”

When currency-market professionals traveled to Barcelona for this year’s TradeTech FX conference, an annual industry get-together, they were greeted with a now-familiar sight: Out of the 100 speakers, just 12 were women.

“I would have definitely made a big bet that, 25 years from the day I started, the gender balance would be substantially different,” said Sutton.

--With assistance from John Ainger, Paul Sillitoe and Jeremy Diamond.

To contact the editors responsible for this story: Paul Dobson at pdobson2@bloomberg.net, Neil Chatterjee, Anne Swardson