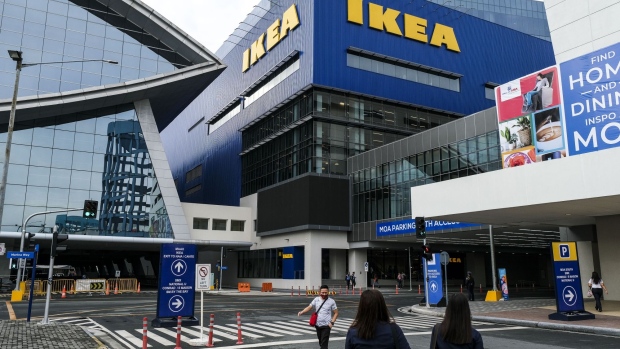 (Bloomberg) -- Ikea opened its biggest store in the world in the Philippines, with the new 730,000 square foot facility in Manila a cornerstone of the home-furnishings giant’s expansion plans in Asia.

Thursday’s opening was feted with an event held at the store’s cafeteria attended by Philippine trade secretary Ramon Lopez and foreign minister Teodoro Locsin, where Ikea’s cult-favorite Swedish meatballs were served to some attendees. They were accompanied for the big day by a special Philippine twist -- adobo sauce.

Ikea is sticking to Covid-19 protocols after the store’s opening was delayed amid the pandemic, with an online booking system that’s full for the next two weeks, according to store manager Georg Platzer. Customers have to wear masks and observe distancing.

The spread houses a two-level 270,000 square foot store, dining area and showroom; warehouses; an e-commerce facility; and a call center. It’s on property leased out by SM Prime Holdings Inc.’s Mall of Asia.

Its opening comes as Ikea has expanded its e-commerce presence -- which proved timely during the pandemic -- with online orders now accounting for 26% of its global sales. The company, which has more than 460 physical stores in about 60 markets, is planning to add nearly 60 more locations in the current financial year. And it’s not just looking toward Asia: It will take its first step into South America this spring, opening a branch in Santiago, Chile.

Platzer said the Philippines had “been the right spot on our map for the longest time.”

“It was always a plan to come to the Philippines,” he said. “It’s a very good growing economy, growing middle class and domestic environment that’s good for us as a home furnishing retailer. I think it’s about time to open it, finally.”

Household spending fueled the Philippine economy’s recovery last quarter, with consumption expected to grow further in the fourth quarter as virus curbs are eased in time for the holidays. However, output isn’t expected to return to pre-pandemic level until the latter half of 2022.

The Manila store was initially scheduled to open in 2020, but faced delays due to Covid-induced movement restrictions and the disruption of construction material supplies. It’s part of a move to expand in Asia, with the brand recently unveiling its second store in India.

The Philippine debut comes despite Ikea forecasting a more difficult year ahead in 2022, due to logistics logjams and price spikes of raw materials brought about by the pandemic.

Despite the supply crunch and challenges keeping stores and warehouses stocked, the company managed to report record sales last year. Chief Executive Officer Jon Abrahamsson Ring of Inter Ikea, the brand’s worldwide franchiser, told Bloomberg in October that his vision was to make Ikea “even more affordable” by shifting a larger share of new products to a lower price segment.