One of the world’s bubbliest housing markets appears to be slowing down.

Canadian home sales dropped for a second-straight month in May as both buyers and sellers appeared to pull back from the frenzied pace that has made the country’s housing market among the hottest in the world. It places second in the Bloomberg Economics global bubble ranking, behind only New Zealand, so everyone from policy makers to homeowners will be tracking how any slowdown in Canada proceeds. 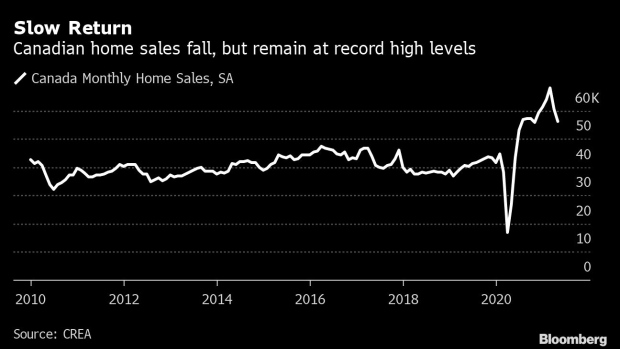 “We now have two months of moderating activity in the books, and that goes for demand, supply and prices,” Cliff Stevenson, chair of the Canadian Real Estate Association, said in a statement Tuesday. “More and more, there is anecdotal evidence of offer fatigue and frustration among buyers, and the urgency to lock down a place to ride out COVID would also be expected to fade at this point given where we are with the pandemic.”

While Canada has been subject to the same combination of low interest rates and lockdown-induced demand for bigger homes that have spurred real estate demand around the world, a constrained supply of housing in the northern nation has made the bidding wars and price appreciation its seen among the most intense anywhere. That prompted a stern warning from Bank of Canada Governor Tiff Macklem and tweaks to mortgage qualification rules from both the main financial regulator and Prime Minister Justin Trudeau’s government.

The record surge in home values has pushed prices in Canada further ahead of both rents and and incomes than any country among the 23 tracked by Bloomberg Economics, except New Zealand. With valuations so stretched, though, buyers are starting to find themselves priced out of the market, particularly as mortgage rates begin to tick up with bond yields. Canada is also seeing lockdown measures ease in many jurisdictions, with rising vaccination rates starting to shift some of the dynamics that fueled the last year’s real estate frenzy.

National home sales fell 7.4 per cent in May from the month before, after a revised 11 per cent drop in April, according to data released Tuesday by the national real estate association. Benchmark prices still rose 1 per cent as the number of new listings also fell, though it was the slowest monthly price gain since June of last year.

Developers also appear to be responding to the tight market created by the pandemic with plans to bring new supply online. New home construction rose in May, according to a separate report Tuesday from Canada Mortgage and Housing Corp. All those gains were in the condo segment of the market, however, with construction of the single family homes that have driven much of Canada’s price gains over the pandemic down 12 per cent nationally on the month. In urban areas, they recorded an 18 per cent drop.

“Maybe we all finally have something else to think about other than housing and being stuck at home all the time,” Shaun Cathcart, the real-estate board’s senior economist, said in a press release. “With the light at the end of the tunnel so close, it feels like housing may take a back seat to us all starting to get our lives back to normal this summer.”