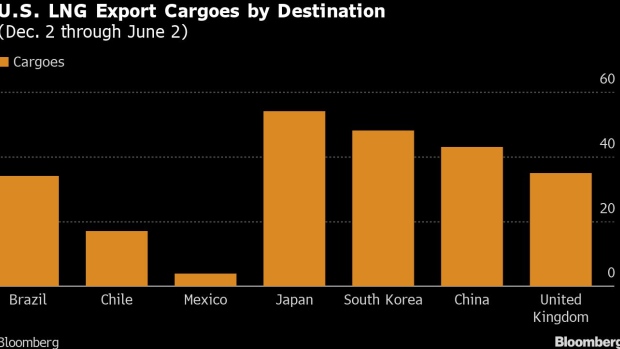 As hydropower output declines, South America’s most populous nation is turning to the super-chilled fuel to keep lights on for its 212 million people. Brazil has already imported a record number of LNG cargoes just from the U.S. this year while state-run oil company Petrobras SA is tapping the spot market for another four.

The drought comes as the nation -- which boosted its ability to import LNG in 2014 to avoid blackouts during soccer’s World Cup -- is facing declining gas production from major supplier Bolivia. The conditions are also affecting other countries in South America, with Chile seeking to buy LNG and traders speculating Argentina could be next.

“South America is running out of hydropower because of dry weather, and I wouldn’t be surprised if buyers all across the region were buying more LNG,” said Henning Gloystein, global director of energy and natural resources at consultants Eurasia Group. “Besides Southeast Asia and India, South America is a growth area for gas demand.”

Hydropower currently accounts for about 70% of Brazil’s electricity mix, and the lack of rainfall has forced the country to import 34 U.S. LNG cargoes over the past six months to bridge the power-supply gap, shipping data compiled by Bloomberg show. That eclipses the 17 sent to Chile and four to Mexico, which has long been the top buyer of U.S. LNG in the Western Hemisphere. Brazilian imports are approaching levels typically seen only from buyers in Asia and Europe.

There’s more to come. Petrobras is seeking two cargoes for July and two for August, according to traders familiar with the tender. GNL Chile is also looking for a cargo for mid-July, while Argentina may soon issue a third tender to purchase the fuel this season as the winter kicks in, traders said.

Gas accounts for a small share of Brazil’s energy mix compared with other major economies, with Petrobras traditionally controlling the bulk of the supply infrastructure. But President Jair Bolsonaro’s administration has introduced legislation to make it easier for other companies to build and operate pipelines, while Petrobras has sold some of its gas assets.

The likes of Royal Dutch Shell Plc and commodities trader Trafigura Group are already benefiting from the reforms, having won permits to import LNG cargoes earlier this year. Brazil’s electricity regulator has put the country under a maximum-tariff regime because of scarce supplies.

“Brazil is becoming a more sophisticated gas and power market,” said Daniel Bustos, chief commercial officer at Excelerate Energy. “The government is doing a great job in allowing more participants with better offers for the system. That results in more reliability.”

This isn’t the first time Brazil has faced a hydropower crunch. In 2001, a severe drought caused key water reservoirs to drop to critical levels, prompting the government to implement a power-rationing plan that affected millions. Since then, it has invested in transmission lines and expanded its thermoelectric generation capacity.

Houston-based Cheniere Energy Inc. has emerged as the top U.S. exporter to Brazil with 13 cargoes from its Sabine Pass LNG plant and another nine from Corpus Christ LNG since December. Brazil also imported one cargo from Angola LNG and another two from Atlantic LNG in nearby Trinidad & Tobago during the same period.

It remains to be seen how long the demand surge will last. Rains could return and refill reservoirs, said Ross Wyeno, an LNG analyst for S&P Global Platts.

Brazil’s hydro reservoirs were about 45% full on a weighted average basis, compared with five-year average of about 53%, data from the operator of the country’s electric system show.

“While Brazil has imported a lot of U.S. LNG this year, they are not a consistent buyer since their demand is largely driven by hydropower output,” he said.

Brazil’s Minister of Mines and Energy Bento Albuquerque has a different view. He said his country will remain a good market for LNG for years to come, particularly due to the fuel’s key role in the energy transition. The nation, which still needs to build much of the infrastructure necessary to move associated gas from its vast offshore oil reserves to consuming markets, will remain short of gas supplies for power plants and a growing number of industrial customers through 2030, according to Norwegian energy research firm Rystad Energy.

The share of hydropower in Brazil’s energy mix is set to drop to 49% by the end of the decade, down from up to 70% now, according to the energy ministry. Natural gas will be a big beneficiary, grabbing 15% of the market from as low as 6% now.

New Fortress Energy is taking note, having earlier this year acquired a series of gas, power and LNG assets along the country’s coast from Golar LNG and Stonepeak Infrastructure Partners in a deal valued at $3.1 billion.

“Gas is going to have a natural expansion over the next 10 years,” Albuquerque said. “Brazil’s market is competitive because it has big demands. There are opportunities for everyone.”