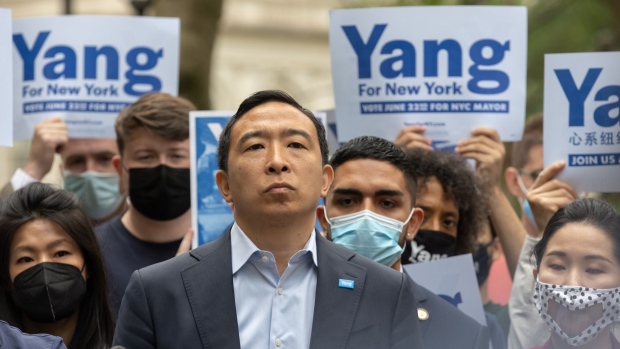 Kathryn Garcia, mayoral candidate for New York City, listens to a question during a new conference outside the Open Door Senior Center in New York, U.S., on Thursday, May 13, 2021. Garcia, fresh off her endorsement by the New York Times, outlined a public safety plan that includes a tenfold increase in cash payments for returned guns and more police on subway trains and platforms. , Bloomberg

A series of polls released this week has Yang, the previous frontrunner, falling behind rivals. The former presidential contender is drawing criticism that he’s unschooled in the fundamentals of government and unqualified to lead the post-pandemic comeback of the most populous city in the U.S. Yang is also fielding an onslaught of attacks by competitors who accuse him of taking donations from moneyed special interests and violating campaign finance rules, a claim Yang denies.

With less than a month before the June 22 primary, which is likely to decide the next mayor in the heavily Democratic city, Brooklyn Borough President Eric Adams surpassed Yang in a poll released Wednesday by Core Decision Analytics and Fontas Advisors, a political consultancy. In a separate survey by Emerson College and Pix11 released late Tuesday, Yang fell to third, behind former city sanitation commissioner Kathryn Garcia who surged into first place, and Adams, who ran a close second.

Political consultant George Fontas, who commissioned one of the polls, said the fast-approaching primary and a barrage of campaign media spending has focused New Yorkers.

“People are paying more attention now,” Fontas said. “They know what attributes are important to them and they are finding those attributes in other candidates, not in Yang.”

Yang benefited in early polls from the afterglow of his 2020 campaign for Democratic presidential nominee, which launched his online celebrity. Yang scored heavy name recognition in a crowded New York City contest marked by lower-profile candidates and confusion over ranked-choice voting, which requires voters to rank five picks.

Up against candidates who mostly stuck to virtual events due to the pandemic, Yang took to the streets, where his high energy shone. Now as pandemic restrictions life and the city reopens, other campaigns are ramping up in-person events and unleashing millions of fundraising dollars.

With concerns around Covid-19 and vaccines dropping in voter importance, issues like crime, taxes and city budgeting are rising in prominence. That’s helped drive support for Adams, an ex-cop endorsed by the New York Post, who is pledging to re-institute a controversial plainclothes unit to address a spike in shootings. “The problem is we had the the wrong people in the plainclothes unit. We had the cowboys,” Adams said at a Tuesday mayoral forum moderated by Al Sharpton.

Voters’ refocus on crime and quality of life issues also helped prop up Garcia, who has touted her experience running sanitation, housing and other large city departments as New York’s crisis manager. She picked up endorsements by The New York Times and Daily News, as well as a slew of elected officials with built-in voter bases.

As for Yang, “he has a very pleasing upbeat personality and optimism about him that’s infectious, but it’s been a very rough month of May for him,” said political consultant Bruce Gyory, who teaches political science at the University of Albany. “The narrative is he doesn’t have a handle on the facts, that he lacks substance, and unless he can turn that around it’s going to create difficulties for him.”

Only 13% of likely Democratic voters said Yang was their first choice in the May 13-15 Fontas poll, down from 28% in January. Adams got 18% and Garcia got 11% in the May Fontas poll. Roughly a quarter of those polled said they were “truly undecided,” Fontas said.

Yang’s slippage coincides with a slew of press reports and opposition attacks questioning his campaign finances and familiarity with the city he aspires to govern.

The gaffes are often trivial, like when he drew ridicule for saying the A train goes to the Bronx. It doesn’t. But Yang’s also been caught unaware of the fiscal implications in advocating the city take over subway and bus operations from the state, without addressing the system’s $50 billion debt. Yang also proposed a casino on Governors Island, even though such a development is prohibited by the federal charter that gave it to the city. On crime and reforming the NYPD, Yang told Sharpton on Tuesday that the city needs someone who is not a product of the existing culture.

Yang says that those who go after him as an outsider without government experience don’t understand that it’s a source of political appeal. “I don’t owe people favors going back years and decades,” Yang said at a press conference last week.

“You want someone who knows how the city works, who has knowledge of its various departments, who is ready to take responsibility for health, safety, transportation, delivering city services,” Cure said. “He doesn’t check off any of those boxes needed to accomplish a recovery.”

Cure panned Yang’s aspirations to take over the subway as a pipe dream and questioned Yang’s insistence on taxing universities in the city, noting he would need state approval for both unlikely moves. “When you start taxing the major universities you interfere with a major generator of economic and job growth,” Cure said.

Yang defended his position last Thursday citing payments Cambridge, Massachusetts gets from Harvard University and Massachusetts Institute of Technology. “We can make the same thing happen here in New York,” he said.

“Increasingly there’s this perception among voters and elected officials that he’s an empty suit,” Muzzio said. “He may be smart, and he’s got what no one else in the race seems to have -- a personality -- but he also has to lose this sense that he’s a drop-in from the presidential race prone to gaffes.”