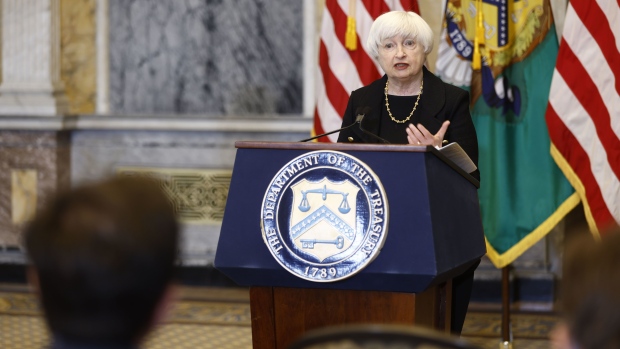 (Bloomberg) -- U.S. Treasury Secretary Janet Yellen mounted a full-throated defense of the Biden administration’s 2021 spending package Thursday in the face of criticism that it helped to fuel the highest inflation in 40 years.

Yellen helped champion the $1.9 trillion American Rescue Plan, which came on the heels of two major packages in 2020 totaling almost $3 trillion under President Donald Trump. The ARP pumped money to households, businesses and local governments to weather fallout from the Covid-19 crisis, just as vaccinations were ramping up.

“These responses played major roles in igniting a robust recovery” and reducing the human toll caused by the pandemic, Yellen said in a speech Thursday in Washington. The plan “played a central role in driving strong growth throughout 2021” that outpaced other advanced economies and triggered a faster labor market recovery than is typical after a recession, she said.

The Treasury chief made no reference in her remarks to the dynamic that, for many Americans, is souring the recovery: inflation. The soaring cost of living is now posing a powerful threat to the Biden administration in the November mid-term elections, where Democrats risk losing control of one or both houses of Congress.

Yellen contrasted the pace of the recovery, as measured by the labor market, with the aftermath of the global financial crisis. While it took more than eight years for unemployment in the U.S. to fall below 4% after hitting 10% in 2009, the jobless rate this time plunged from nearly 15% in April 2020 to back below 4% in just 20 months.

Consumer prices leapt by 8.5% in the year through March, the most since 1981. That’s been propelled, economists say, by a combination of the coronavirus’s effect on supply chains, the unprecedented pace of government spending and, most recently, higher energy costs stemming from Russia’s invasion of Ukraine.

Inflation has gnawed away at the real value of what’s been the biggest wage gains in years, and forced many Americans to cut back on spending.

In the past, Yellen has rejected the idea that the ARP was too big and served as a major cause of inflation. “We were trying to make sure that we took care of people so they could make it through the pandemic,” she said in the interview in February. “I have to say, I’m very pleased with the results.”

Republicans have seized on the issue in the election campaign, but it’s not just the GOP blaming the Biden administration for helping to fuel inflation. Lawrence Summers, Treasury secretary under President Bill Clinton, and Jason Furman, head of the Council of Economic Advisers for President Barack Obama, have both said the ARP contributed unnecessarily to the ongoing surge in prices.

Yellen took on critics only obliquely. While it was easy to evaluate the performance of the rescue plan after the fact, she said, it’s important to recall that it was crafted during a time of extreme uncertainty and with lessons from the Great Recession of 2007-09 still fresh.

“Throughout 2020, and into 2021, the path of the pandemic, including its severity and the role of future viral strains could not be predicted,” Yellen said.

That uncertainty, she added, meant policy makers had to guard against an extreme potential outcome -- what economists refer to as a “tail risk.”

Yellen’s speech was delivered at an event hosted by the Brookings Institution, and was dedicated to examining the U.S. government’s economic policy response to the Covid-19 pandemic.

In her remarks, the Treasury secretary said the U.S. could better prepare for future recessions by stepping up so-called automatic stabilizers -- policies that automatically add and subtract stimulative spending based on economic data points -- and by responding in ways that consider the impact on vulnerable populations, especially people of color.

(Updates with context on perspective on inflation in eighth paragraph.)