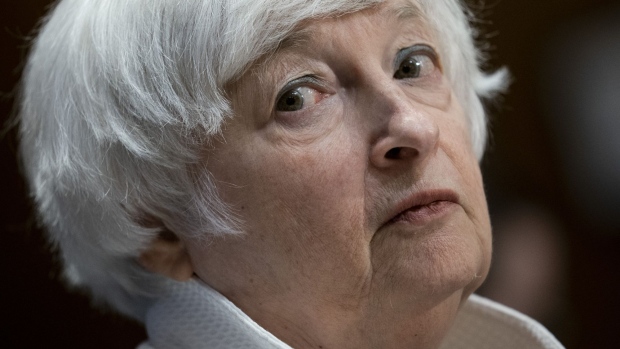 Janet Yellen, US Treasury secretary, listens during a Senate Finance Committee hearing in Washington, D.C., US, on Tuesday, June 7, 2022. Yellen, worried by the specter of inflation, initially urged Biden administration officials to scale back the $1.9 trillion American Rescue Plan by a third, according to an advance copy of a biography on the Treasury secretary. , Bloomberg

(Bloomberg) -- US Treasury Secretary Janet Yellen said that crytocurrency assets are a “very risky” choice to include in the retirement plans of average savers, and that it would be reasonable for Congress to address the danger.

“It’s not something that I would recommend to most people who are saving for their retirement,” Yellen said Thursday in Washington at an event organized by the New York Times. “To me it’s very risky investment.”

Yellen was responding to a question about an announcement from Boston-based Fidelity Investments in April that it would add a crypto option to workplace retirement plans it manages. The Labor Department has signaled its opposition.

Yellen said it would be reasonable for Congress to regulate what assets could be included in tax-favored retirement vehicles, like 401(k) plans.

“I’m not saying I recommend it, but that to my mind would be a reasonable thing,” she said of congressional action.