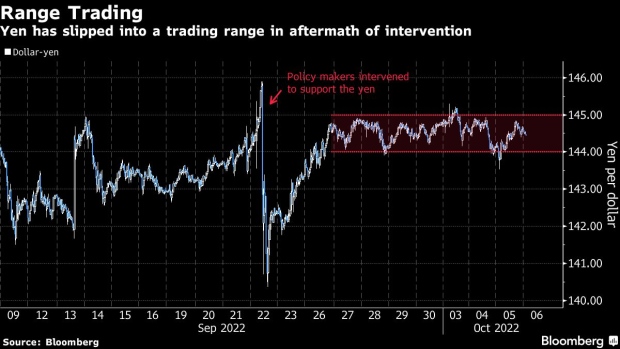 (Bloomberg) -- Almost 5,000 miles from Tokyo, this year’s most accurate yen forecaster says the worst of its slump is behind it.

Dollar-yen is unlikely to break much higher from its current range as market expectations for peak US interest rates have already climbed to around 4.5%, said Joseph Capurso, head of international economics at Commonwealth Bank of Australia in Sydney. CBA’s more sanguine view is at odds with peers such as Morgan Stanley who see the Japanese currency worsening its slide toward 150 per dollar, according to data compiled by Bloomberg.

What’s key for the yen is that the Federal Reserve likely won’t keep rates high for too long, said Capurso, who’s been covering the currency for more than a decade and the US economy since 2002 when working for Australia’s then prime minister.

“By the end of next year they’ll be cutting and that’ll bring dollar-yen down,” he said. “The yen’s a safe-haven currency and if the Fed is cutting then there’s problems in the world economy.”

CBA currently has a 137 per dollar year-end call for the yen from June but is in the process of finalizing its latest forecasts.

Japan’s currency has tumbled more than 20% against the dollar this year due to its widening monetary policy differential with the US, triggering government intervention to support the yen for the first time since 1998. Rising global recession jitters are yet to offer a haven bid and the yen is trading near its weakest since the Asian Financial Crisis.

Capurso has been the top-ranked yen forecaster each quarter this year, according to data compiled by Bloomberg, based on criteria such as margin of error, timing and directional accuracy.

After advising the department of then Australian Prime Minister John Howard on economics and finance, he joined Commonwealth Bank in 2005 and took over Japanese economic and currency research about six years later. Since then, he has never expected Japan would raise rates and places a large emphasis on the nation’s current accounts to determine the direction of the yen.

It was a lesson learned after Japan recorded a shock deficit about a decade ago. The feeling then was the yen was going to weaken, and it subsequently did, Capurso said.

“That moment stuck with me,” he said. “If we ever think it’s going to go to a deficit or just fall a long way, then we’ve been very bearish on the yen.”

Japan’s current account balance has fallen to fluctuate between a deficit and small surplus, according to the most recent monthly data from the Ministry of Finance.

To be sure, Capurso’s forecast hasn’t been right on the money, just better than peers. CBA expected the currency to be trading at 136 per dollar at the end of September versus a consensus estimate of 129 per dollar when it updated its forecasts in June. The yen closed just under 145 per dollar on Sept. 30 and was around 144.60 on Thursday.

“We were a fair bit off,” Capurso said. “This goes to show you just how rapidly and how much the yen moved.”