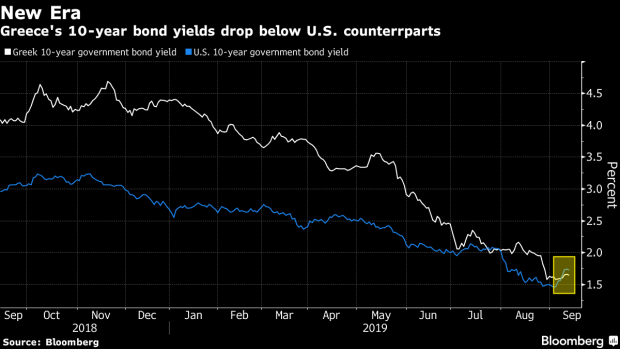 Tourists visit the Tomb of the Unknown Soldier in front of the Greek parliament in Athens, Greece, on Wednesday, June 28, 2017. The change in sentiment toward Greece -- the epicenter of the European financial crisis -- is reflected in the fact that country’s bond yields are the lowest since before the turmoil even as the debt remains deep in junk territory. Photographer: Kostas Tsironis/Bloomberg , Bloomberg

(Bloomberg) -- Investors are hailing Greece’s plan for the early repayment of 3 billion euros ($3.3 billion) in bailout funds as one of the strongest signs yet of its recovery from the economic devastation of the financial crisis.

At a Friday euro-zone meeting, Finance Minister Christos Staikouras is expected to ask his counterparts to waive their right to proportional repayment if Greece pays back International Monetary Fund loans ahead of their maturity.

Prime Minister Kyriakos Mitsotakis estimates the move will save around 75 million euros per year. Some of the crisis era loans feature rates of over 5% and the country can now look toward cheaper alternatives under its new business-friendly government.

The wider context of an unprecedented global bond rally -- that has left 30% of all investment-grade securities with sub-zero yields -- is also supportive.

“Despite a huge rally this year, it’s still worth holding GGBs,” Societe Generale’s Ciaran O’Hagan wrote in a note sent to clients. “IMF repayments are a signal that the outlook for Greece continues to improve.”

The global trend features negative-yielding debt worth in excess of $17 trillion. That was highlighted further this week, when the European Central Bank restarted its bond-buying stimulus policy and earlier this year helped Greece’s 10-year yield fall under that of the U.S.

Even as yields on Greek bonds continue to plumb record lows, they still offer higher returns than euro-area peers.

Capital controls are now a distant memory and the country has posted the highest PMI manufacturing index reading in the euro-zone -- even at a time when the flagship investment initiative, the long-delayed Hellinikon project, is only at the initial stages of being revived.

“Greece has become a hit destination,” said Alexandros Malamas, a sales trader at Piraeus Securities in Athens. “Demand for Greek assets from foreign investors remains elevated as the government seems to be off to a good start.”

The administration, which took office in July, faces a crucial test later this month as creditors are due in Athens to check on whether post-bailout conditions are being met.

Mitsotakis has said his first priority is to lower primary surplus targets so he can secure some room to cut taxes.

While Greece is required to achieve a primary surplus of 3.5% of gross domestic product every year until 2022, the premier wants to bring the target down to around 2% starting from 2021.

Incoming European Central Bank President Christine Lagarde has said the targets are excessive and put too much pressure on the Greek economy.

The European Commission in November is also expected to update its debt sustainability analysis for Greece, incorporating new data on borrowing costs.

The previous projection was based on debt refinancing costs of around 4.5%. As those costs are now closer to 1.5%, Greece could have the same debt trajectory even with lower primary surpluses.

In the absence of new analysis, the Commission and the Greek government are weighing scenarios that could offer some leeway, including counting as revenue the profits that euro-area central banks get from holding Greek bonds in investment portfolios.

There could also be some relief if the Commission approves an Italian-style solution to help local banks cut bad loans. Lenders could then offload as much as 20 billion euros from a stock of 80 billion euros of noncollectable debt.

Meanwhile, the Greek government is moving forward with privatization projects including Hellinikon, a stalled mining investment by Eldorado Gold and the sale of 30% stake in the Athens airport, with other plans in sectors like energy due in the coming weeks or months.

“There will be an increased appetite for high-quality Greek assets across various sectors including in energy and infrastructure,” said Antonios Timplalexis, managing director at Nomura, noting “further economy-friendly reforms and yields trending lower.”

Greek bonds are trading at record highs, with the 10-year yield dropping to 1.509% for the first time on Thursday following the European Central Bank policy decision.

German Chancellor Angela Merkel acknowledged at a news conference with Mitsotakis in August that “Greece’s current reform agenda will make it easier to fulfill the obligations it still has.”

Now, investors will be looking for a nod of approval from ratings agencies.

“Yields could continue falling as much as the spread over Germany will let them,” said Thanassis Drogossis, head of equities at Athens-based Pantelakis Securities. Ratings upgrades are critical, he said, “so the country can eventually trade close to Italy and Cyprus levels.”

--With assistance from Eleni Chrepa and Andrew Blackman.

To contact the editors responsible for this story: Ven Ram at vram1@bloomberg.net, Jerrold Colten, Michael Hunter