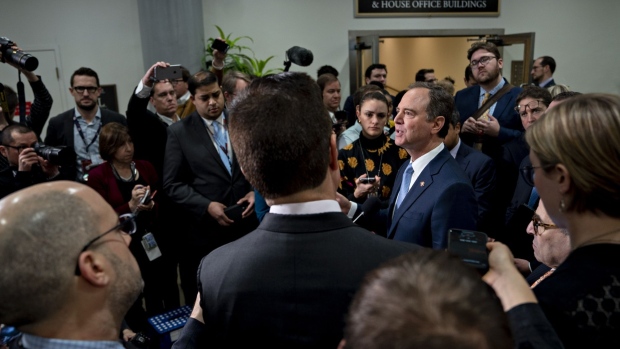 Adam Schiff, right, speaks during a news conference in the Senate Subway at the U.S. Capitol in Washington, D.C. on Jan. 24, 2020. Photographer: Andrew Harrer/Bloomberg , Bloomberg

A recording appears to show President Donald Trump saying he wanted Marie Yovanovitch removed as ambassador to Ukraine, ABC News reported without providing the audio. “Get rid of her,” a voice that appears to be Trump’s is heard saying, ABC said. “Get her out tomorrow. I don’t care. Get her out tomorrow. Take her out. OK? Do it.” If accurate, the recording backs up testimony in the House impeachment hearings that Trump had Yovanovitch removed because she was viewed as an obstacle to his efforts to press Ukraine into investigating former Vice President Joe Biden and his son. She was recalled in May 2019.

Bloomberg’s Green Daily is where climate science meets the future of energy, technology and finance. Sign up for our daily newsletter to get the smartest takes from our team of 10 climate columnists. Sign up here.

House managers will wrap up their case against Trump Friday, completing three days of arguments in his Senate trial. Democratic Representative Adam Schiff drew plaudits from both sides of the aisle for his performance. Trump’s lawyers are to begin his defense on Saturday.

U.S. health authorities are monitoring more than 60 people, including three in New York, for potential infection with the coronavirus. China, meanwhile, is struggling to contain rising public anger over its response to the outbreak as it restricts travel for 40 million people during a major holiday.

Cities and states across America are using the courts to force energy companies to address the damage done by fossil fuels. But making Big Oil pay for climate change may be impossible.

The Pentagon disclosed on Friday that 34 U.S. service members suffered traumatic brain injury in Iran’s missile strike this month, made in response to the U.S. assassination of its top general. Trump initially said no Americans were harmed.

Goldman Sachs announced this week it won’t take a company public if the board is made up entirely of straight, white men (unless the company is in Asia).

Can rodents be chic? Fashion labels trying to cash in on the coming Lunar New Year have a difficult task in 2020: It’s the Year of the Rat.

What’s Luke Kawa thinking about? The Bloomberg cross-asset reporter says the 10-year U.S. Treasury yield is on track for its biggest one-week drop since November. However, it’s difficult to make the case that the retreat in yields is sending a meaningful signal about the economic backdrop. There are plenty of potential non-economic reasons for the strong start to the year for sovereign debt, he says. So while the bond market may be in a a tizzy, the Fed is still holding course, possibly because stocks aren’t far from last week’s all-time highs.

What you’ll want to read tonight

Boeing’s newest plane is expected to spread its gargantuan wings—so long that the tips are hinged—and rumble into the skies over Washington state in the next few days. The 777-9 is the planemaker’s first new model since two fatal crashes killed 346 people, leading to the global grounding of its 737 Max (which the federal government said was making strides towards returning to service). The new aircraft may face heightened scrutiny from regulators, airlines and investors. Safety aside, there’s concern that the jetliner is simply too big for today’s airlines.