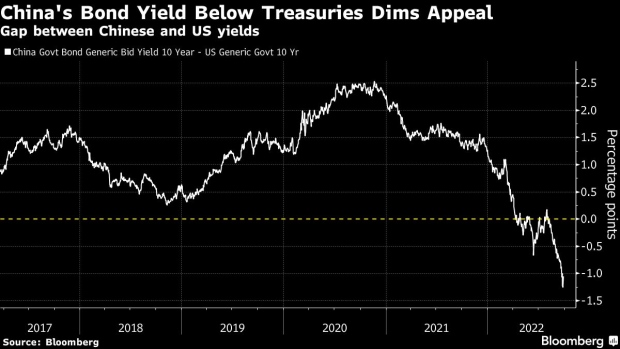 (Bloomberg) -- Yuan bears are on the prowl, emboldened by a belief that policy makers in China can do little to battle the surging dollar.

The yuan strengthened on Thursday following a report that China’s central bank had asked major state-owned banks to be ready to sell dollars for the local unit in offshore markets to rein in the Chinese currency’s decline. It had earlier weakened even after Wednesday’s verbal warnings from the People’s Bank of China, which cautioned against speculation on the currency and said it had “plenty of experience” in fending off shocks.

The comments came after the central bank made it more expensive to bet against the yuan in the derivatives markets. A jump in the required ratio to 20% as of Wednesday, from the previous 0%, increased the cost of purchasing dollars in the currency forwards market.

Still, derivatives traders are betting on further declines -- the options market sees a more than 50% probability that the currency will drop further to 7.3 against the dollar in the offshore market in the next two months.

Three-month risk reversals, which measure the cost of hedging against offshore yuan losses, soared over the past few days and briefly exceeded 1.5% on Wednesday. Still, the gauge remains lower than its 2022 high reached in May and well below the peaks set two years ago at the height of the global pandemic.

“There’s not much else the authorities can do at this stage apart from really trying to enforce capital controls more aggressively,” said Mansoor Mohi-uddin, chief economist at Bank of Singapore Ltd.  “They don’t have a very strong hand at this stage vis-a-vis market forces.”

The PBOC’s headache is shared by policy makers worldwide, as the dollar’s surge shows no sign of abating. But the yuan’s accelerated decline since August is driven also by signs China’s economy is cooling due to Covid lockdowns and a housing-market crisis.

And while the Federal Reserve and most other central banks aggressively hike interest rates, China has kept monetary policy loose, sending yields on yuan-denominated bonds below those on Treasuries.

A bout of risk-off sentiment had earlier in the day sent the onshore yuan back toward a 14-year low touched on Wednesday. The onshore currency has fallen more than 4% against the dollar this month and is on track for the worst annual loss since 1994. In the offshore market, the yuan reached a record low of 7.2674 on Wednesday in data going back to 2010.

The worry is China could see a repeat of 2015, when monetary easing and growth concerns coincided with the Fed’s tightening cycle, leading to yuan depreciation as well as a one trillion-yuan ($139 billion) decline in foreign-exchange reserves through 2016.

The PBOC has set stronger-than-expected yuan exchange rate fixings for 26 straight sessions, the longest streak on record since Bloomberg started surveys with market participants in 2018. The onshore yuan also came within a whisker of breaching the weak end of its 2% trading band around the reference rate on Wednesday.

Brad Bechtel, FX strategist at Jefferies Financial Group Inc., is among those who sees the yuan weakening to 7.3-7.4 versus the dollar.

“The PBOC has been making tweaks around the edges of the FX market for some time now without being overly aggressive,” Bechtel said. “They don’t want to be heavy-handed but they are trying to slow the move as much as they can while still maintaining two-way markets.”

China’s dilemma is that it cannot afford to shore up its currency too much. Its export complex is slowing as the global economy cools while the yuan is still firm relative to the currencies of export-focused regional peers. It recently touched a 13-year high versus the South Korean won and 29-year peak versus the yen.

However, there are signs that yuan weakness is becoming more broad-based, with a trade-weighted index down 6% since peaking in March and headed for its 2022 low.

Mitul Kotecha, head of emerging markets strategy at TD Securities, expects the PBOC to resort to direct intervention and other aggressive measures only if depreciation moves are sharp.

“The PBOC will not stand in the way of a gradual depreciation in the trade-weighted yuan at a time when exports are coming under growing pressure,” Kotecha said. “It may end up being about the pace of the move rather than direction.”

(Adds report that China’s central bank asked state-owned banks to be ready to sell dollars to in the offshore market in second paragraph, updates price in fourth paragraph)