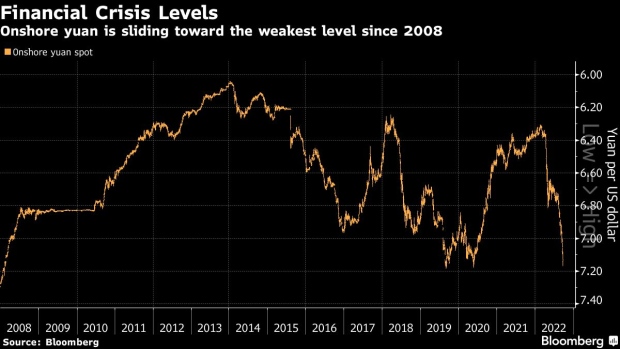 (Bloomberg) -- Traders are bracing for more pushback from China’s central bank as the yuan approaches the lowest level in 14 years.

The onshore yuan has lost about 4% over the past month, trading within 1% of 7.2 per dollar, a level it hasn’t reached since 2008. The People’s Bank of China has already stepped up its currency defense, but it did little to stop the depreciation.

“Authorities are obviously concerned,” said Patrick Bennett, a Hong Kong-based strategist at Canadian Imperial Bank of Commerce. “That makes the task of supporting the domestic economy more difficult,” he said, adding that a move through 7.2 per dollar would put 7.3 in immediate focus.

Morgan Stanley expects the yuan to weaken to 7.30 per dollar by year-end. “Yuan’s sensitivity to the dollar is higher now given bond outflows and exporters’ lower FX conversion ratio,” strategists including Min Dai wrote in a note on Monday.

Betting against the yuan has been a winning strategy this year as the currency fell 11%. It’s on pace for the biggest annual decline since 1994, when China unified its currency market, resulting in an over 30% devaluation of its official exchange rate. The more recent decline reflects policy divergence between China and the US. The PBOC has been easing rates to shore up an economy battered by Covid restrictions and a housing slowdown, while the Federal Reserve is raising rates to cool inflation.

The yuan is not the only currency coming under pressure as the dollar trades at a twenty-year high. The British pound slid to a record low on Monday, while the Bank of Japan intervened to support the yen for the first time since 1998 last week as the currency fell past 145 per dollar.

How much damage is a strong dollar causing? That’s the theme of this week’s MLIV Pulse survey. It’s brief and we don’t collect your name or any contact information. Please click here to share your views.

The PBOC has already signaled its discomfort with the depreciation. On Monday, it imposed a risk reserve requirement of 20% on banks’ foreign-exchange forward sales to clients, effectively making it more expensive to bet against the yuan with derivatives. The central bank has been setting the daily reference rate at a stronger-than-expected level for 24 straight sessions through Tuesday. It also reduced banks’ foreign-currency reserve requirements, which increases the dollar supply to prop up the yuan.

The PBOC still has plenty at its disposal to ensure yuan stability ahead of the Party Congress next month when President Xi Jinping is expected to secure an unprecedented third term.

The next step may be an official restoration of the so-called counter cyclical factors in the yuan fixing formula, according to Jingyang Chen, a strategist at HSBC Holdings Plc. The measure, which was designed to deter one-sided bets, was introduced in 2017 before being scrapped in October 2020.

Other measures include increasing the issuance of central bank bills in Hong Kong to mop up yuan liquidity offshore and jack up borrowing costs.

As long as the policy divergence persists and the dollar remains strong, these measures are unlikely to deter short sellers for long, according to HSBC.

If all other currencies continue to weaken, the PBOC won’t defend the 7.2 level at all costs, said Alicia Garcia Herrero Asia Pacific chief economist at Natixis SA. However, if the pace of depreciation accelerates in the run-up to the party congress, “the PBOC will stem it off,” she said.

(Updates yuan fixing in 8th paragraph and prices in the last paragraph.)