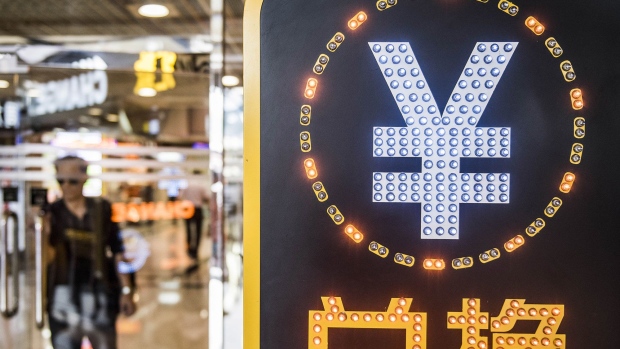 The currency symbol for the Chinese yuan is displayed at a currency exchange store in Hong Kong, China, on Wednesday, Aug. 12, 2015. The yuan sank for a second day, spurring China's central bank to intervene as the biggest rout since 1994 tested the government's resolve to give market forces more sway in determining the exchange rate. Photographer: Bloomberg/Bloomberg , Photographer: Bloomberg/Bloomberg

(Bloomberg) -- Russia is considering purchases of China’s yuan, India’s rupee and Turkey’s lira for its wealth fund under a budget mechanism that uses excess income from energy sales.

The central bank disclosed a possible mix of currencies for the first time in a report on the policy outlook for the next three years on Friday. It said others can also be included, without giving more specifics.

“A considerable amount of investments” from the Wellbeing Fund will also go into domestic projects from 2022-2025 since they are necessary to help the economy adapt to changed circumstances as a result of sanctions, according to the report.

With euro and dollar purchases blocked by international sanctions over Russia’s war in Ukraine, Finance Minister Anton Siluanov has previously indicated that Russia may turn to other currencies to top up the Wellbeing Fund and possibly invest in the yuan as it expands trade with Asia.

Bank of Russia Governor Elvira Nabiullina has warned against using volatile currencies, while supporting a return to saving windfall income from oil and gas sales. The central bank had earlier urged the government to order state companies to convert their foreign-exchange holdings into the currencies of the nations that haven’t joined in sanctions against Russia.

The Finance Ministry is working on changes to the budget rule, which was suspended over the sanctions imposed after President Vladimir Putin ordered the invasion of Ukraine. It’s seeking to buy currencies from countries listed as “friendly” by Russia.

The wealth fund grew the most since July 2019 in May on soaring energy prices but fell to just under $200 billion last month. Yuan-ruble trading reached a record at the Moscow Exchange last month.