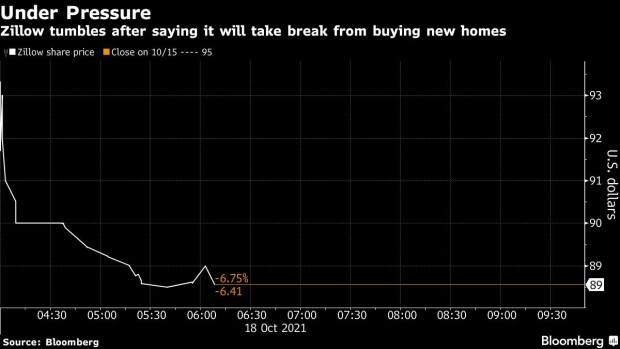 (Bloomberg) -- Zillow Group Inc. shares fell as much as 6.8% in premarket trading Monday after the online real estate firm said it would stop buying new homes and work to clear a backlog of properties it already has.

The Seattle-based company, which acquired more than 3,800 homes during the second quarter, has seen its stock price tumble about 27% this year after it nearly tripled in 2020 amid the pandemic-fueled housing market boom.

The shares have come under additional pressure in recent weeks after a viral TikTok video from a real estate agent in Las Vegas said an unnamed company was pulling off a convoluted scheme to manipulate housing prices in his home market. Zillow is also facing increased competition from firms like Opendoor Technologies Inc., which announced in August that it bought about 8,500 homes during the second quarter.