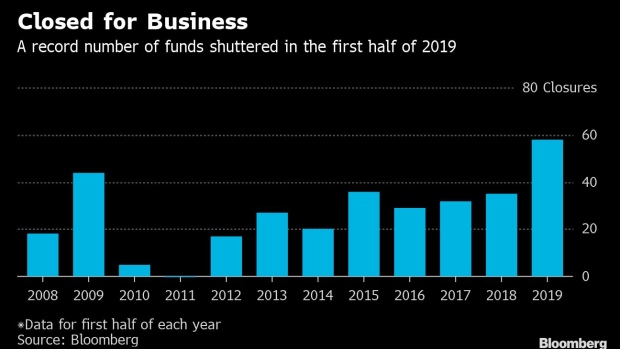 It’s getting more and more difficult to prevail in the crowded market for exchange-traded funds.

A record 58 ETFs were liquidated in the six months through June, marking the industry’s worst-ever start to a year, according to data compiled by Bloomberg. Multiple closures from Invesco Ltd., the fourth-largest U.S. issuer, and WisdomTree Investments Inc. pushed the number beyond the previous all-time high for the first six months of a year, reached in 2009 when 44 funds shuttered in the midst of the financial crisis.

But almost all of these failed funds share one common trait: A higher management fee.

So-called zombie funds, which attract little trading activity or investment, are getting hit hard as competition ratchets up in the cutthroat ETF arena. With more than 2,000 ETFs to choose from, asset managers are fighting an intensifying fee war to woo investors. That’s put their profit margins under pressure and lowered tolerance for slow-growing products, sending a steady stream of funds to the ETF graveyard.

“Attrition is going to happen as fee compression becomes the norm,” said Mohit Bajaj, director of ETFs at WallachBeth Capital.

Another 12 funds are already slated to shut later this year, including six from BlackRock Inc., potentially propelling annual closures to a record, according to Bloomberg Intelligence.

About a fifth of the funds that vanished in the first half focused on single countries, including Poland and Germany. Many others, like the WBI BullBear Global Rotation ETF or the JPMorgan Diversified Return International Currency Hedged ETF, tracked complex ideas that failed to attract investor attention.

But higher expense ratios unite almost all these funds. The liquidated ETFs charged an average US$6.20 for every US$1,000 invested, while more than 70 per cent of flows this year went to funds that charge US$1 or less.

“This particular outbreak in the fee war was the most violent I’ve ever seen,” said Eric Balchunas, an analyst at Bloomberg Intelligence. “It scared a lot of people who might have had ETFs in registration,” he said, referring to the process that all funds go through before they begin to trade.

The race to zero is impacting big firms and small. While large banks like JPMorgan Chase & Co. -- which started a stock fund charging just 20 cents in March -- are leveraging their scale to lower costs, smaller players are looking to make a name for themselves by offering bargain-basement prices, or even eliminating fees. Newcomer Salt Financial is paying investors to own one of its ETFs.

Price sensitivity is also impacting the number of entrants, according to a July 1 Bloomberg Intelligence report, which found fund debuts could drop 10 per cent this year from a three-year average of 250.

It’s natural to see a pullback in new products following years of growth, according to Phil Bak, chief executive officer of Exponential ETFs.

“There was a feeling in the last five years of a gold rush, with a lot of people rushing into the space,” he said. But “you want to invest in something that the asset manager really stands behind.”