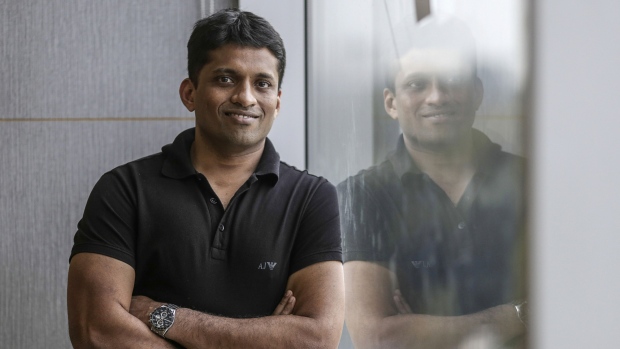 India’s newest billionaire is a former classroom teacher who developed an education app that’s grown to a valuation of almost US$6 billion in about seven years.

Byju Raveendran joined the rarefied club after his Think & Learn Pvt scored US$150 million in funding earlier this month. That deal conferred a value of US$5.7 billion on the company in which the founder owns more than 21 per cent, people familiar with the matter said. Its closing coincided with the announcement that the company’s Byju’s app -- named after the founder -- will team up with Walt Disney Co. and take its service to American shores by early 2020.

The 37-year-old entrepreneur -- who has said he wants to do for Indian education what the Mouse House did for entertainment -- is taking his biggest step yet geographically and creatively. In his new app, Disney staples from The Lion King’s Simba to Frozen’s Anna teach math and English to students from grades one through three. The same characters star in animated videos, games, stories and interactive quizzes.

“Kids everywhere relate to Disney’s Simba or Moana, who grip kids’ attention before we take them through the loop of learning,” said Raveendran, also chief executive officer.

India is going through a dramatic period of wealth creation -- and destruction. A new breed of self-made entrepreneurs is joining the ranks of the well-heeled, helping the country’s ultra-rich population grow at the world’s fastest pace. Raveendran, at least on paper, assumes his place among those parvenus thanks to his effort in internet education.

Online learning is booming, perhaps nowhere more so than on Byju’s home turf, where internet usage is exploding because of the ubiquity of cheap smartphones and cut-price wireless plans. India’s online learning market is expected to more than double to US$5.7 billion by 2020, according to the government-backed India Brand Equity Foundation.

Education technology for kindergarten through 12th grade is one of the fastest-growing segments of the country’s internet market, said Anil Kumar, chief executive officer of Redseer Management Consulting Pvt. “Indian education startups are well set to seize the global opportunity given that they already cater to a large English-speaking base and have created unique education content,” he said.

Byju’s own fortunes have climbed alongside the market. Its revenues are expected to more than double to 30 billion rupees (US$435 million) in the year ending March 2020, Raveendran said. That pace of growth has already caught the eye of some of the industry’s biggest investors from Naspers Ventures and Tencent Holdings Ltd. to Sequoia Capital and Facebook-founder Mark Zuckerberg and wife Priscilla Chan.

Those big-name backers buy Raveendran’s vision. The Byju’s founder grew up in a village on India’s southern coast where his parents were school-teachers. He was a reluctant pupil, playing hooky to frequent the football field, then learning on his own at home. He became an engineer and then began helping friends crack entry exams to top Indian engineering and management schools. The classes swelled till he finally began teaching thousands in sports stadiums, becoming a celebrity tutor who commuted between multiple cities during weekends.

He set up Think & Learn in 2011, offering online lessons before launching his main app in 2015. The business has signed up more than 35 million of whom about 2.4 million pay an annual fee of 10,000 to 12,000 rupees, helping it became profitable in the year ending March 2019. That’s when Raveendran began courting long-term investors such as pension funds and sovereign wealth funds -- his latest backer is the Qatar Investment Authority. In Byju’s latest funding round, the entrepreneur bought shares to maintain his equity level. Along with his wife and brother, the Raveendran clan now holds a total stake of about 35 per cent, said the people familiar, asking not to be quoted as the matter is private.

Byju’s approach is simple -- captivate kids by transforming the content to fit short attention spans. Raveendran has always harbored ambitions to crack English-speaking countries, and has flown in YouTube stars to feature in his videos.

In Disney, he may have found a ready-made audience. All the lessons on the new service with Disney are set in the context of the entertainment giant’s classics and stay true to the narrative. To explain temperature, the app sets up a scene where Frozen’s Elsa falls ill because she constantly plays with snow. Anna gets out the thermometer to gauge her fever and a little story is then built around heat and cold. Or, to learn shapes, young learners dive into the story of Cars where they have to sort items like tires, traffic cones and billboards into buckets to learn about round, triangular and rectangular shapes.

“We are customizing Disney Byju’s to the American and British school curriculum,” Raveendran said. “The characters have universal appeal.”