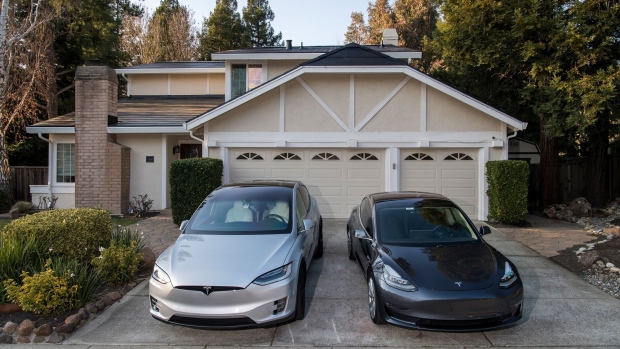 Tesla Inc. Model X and Model 3 cars sit parked in the driveway of a home with a Tesla Solar Roof in San Ramon, California, U.S., on Saturday, Feb. 8, 2020. Tesla Chief Executive Officer Elon Musk is pushing the Solar Roof and batteries as essential components of the company's drive to reduce fossil fuel use. , Bloomberg

(Bloomberg) -- Sign up to receive the Bloomberg Green newsletter in your inbox.

The landmark US climate bill passed by the House of Representatives on Friday is a boon for would-be buyers of electric vehicles: It includes a $7,500 point-of-sale tax credit for any purchase of a qualifying new EV, and $4,000 off the purchase of a used one. But the bill doesn’t solve for one of the biggest challenges facing interested buyers: inventory.

It’s terribly difficult to get a new electric car these days. In a recent survey of thousands of EV owners for Bloomberg Green’s Electric Car Ratings, respondents said they waited almost seven months, on average, for their battery-powered vehicle. In Australia, the delivery delay on a new Tesla is so long — up to nine months — that used models are selling for hefty premiums. And while the new US incentives are generous, they come with manufacturing limitations that will soon exempt many of the machines on offer, leading to a mad dash this week to make a qualifying purchase.

But what if EV ownership was just a stopgap? What if you could simply subscribe to a car like a 5,000-pound magazine?

That’s the future being sold by Autonomy, a California-based startup that since January has been targeting a narrow niche on the EV ownership spectrum, somewhere between the Hertz rental counter and a three-year lease. “We exist to expand the adoption of electric vehicles,” reads Autonomy’s pitch, “and we don’t think you should be forced to accept expensive, long-term debt to drive one.”

Autonomy is now stocking up on EVs from pretty much every company that makes them: This week, it announced plans to order nearly 23,000 cars from 17 automakers, including Ford, Polestar and Tesla. There are even 200 vehicles reserved from Canoo and Fisker, two companies on the not-quite-there side of actually making a drivable electric car.

The subscription model has some logic for consumers. In part because of fast-evolving technology, EVs have traditionally shed value much quicker than gas-powered cars. On a depreciation scale, consumers typically lump them in with cell phones. And while Autonomy’s offering sure looks like a lease — costs include a $5,900 “start fee,” then $490 to $690 a month for up to 1,000 miles of driving — customers can end the subscription any time after three months, and don’t have to pay maintenance, registration fees or interest.

But EV ownership is also looking better by the day. The depreciation curve is flattening thanks to longer-range machines, and car companies are getting more vocal about things like battery longevity. A three-year-old Chevrolet Bolt, for example, will recoup 84% of its value today, in line with the average resale of all three-year-old cars in North America, according to CarEdge.com, a consumer-facing market research platform.

That could be why auto executives are pushing to round up that sweet, sweet software revenue in smaller chunks. BMW, to much outcry, is selling an $18-a-month subscription for heated seats in the UK, and General Motors turned its OnStar voice navigation into a $1,500 “mandatory” subscription on every new Buick, GMC and Cadillac Escalade. Even without a la carte add-ons, one of the major forces propping up prices for used EVs is, ironically, their ability to update remotely — the same technology carmakers are using to nickel-and-dime drivers with subscription services.

A contemporary car is nothing if not a dense stack of software, which means subscriptions on wheels are not entirely bonkers. But a car is also an appliance, and consumers aren’t accustomed to renting a refrigerator, let alone paying a monthly fee to use the ice-maker. Luckily for Autonomy, the simplest pitch may be the best one. If it can bigfoot individual EV orders by jumping to the head of the queue, the startup could find scads of subscribers — simply because it will have available cars.