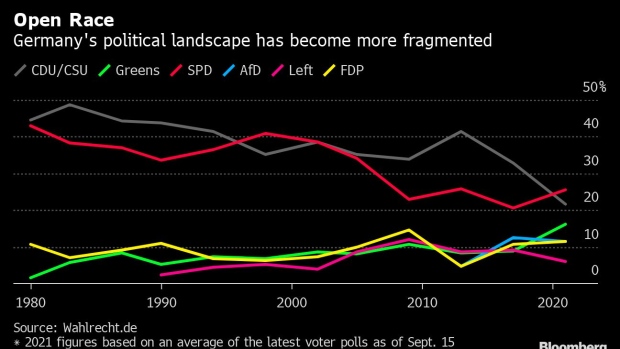 The trading floor in the Frankfurt Stock Exchange, operated by Deutsche Boerse AG, in Frankfurt, Germany, on Monday, Dec. 14, 2020. The topsy turvy trade talks between the U.K. and the European Union took another somersault on Sunday when Boris Johnson and Ursula von der Leyen gave negotiators another shot at closing a deal. Photographer: Alex Kraus/Bloomberg , Bloomberg

(Bloomberg) -- As voters in Europe’s biggest economy head to the polls, investors have a lot to hope for and a few reasons to be alarmed.

Surveys of voting intentions show no jump in support for populist, extreme candidates that could meaningfully disrupt markets in Germany and beyond. Barring a wild miss by pollsters, a coalition led by mainstream parties with a moderate chancellor will succeed Angela Merkel’s government -- possibly after prolonged negotiations that could drag on for weeks or months.

Support across political parties for more investment and public opinion backing for tougher climate policies could prove a boon for stocks, especially companies well-positioned for the shift to a lower-carbon economy.

“The German election could be a catalyst for energy transition companies.” said Roland Kaloyan, head of European equity strategy at Societe Generale SA. “We’ll likely end up with a government with a strong environment mandate.”

Here’s our guide to this election’s potential winners and losers in equity markets.

“All major political parties have stated that they want to step up Germany’s climate ambitions based on the country having a challenging 65% CO2 reduction target for 2030,” Barclays Plc strategists including Peter Crampton wrote in a note to clients. The emerging consensus will lend support to stocks including E.ON SE, RWE AG and Encavis AG, on all of which Barclays has an overweight recommendation.

Green stocks could use the support, after a lackluster performance so far in 2021.

In addition to the emerging climate consensus, all of the main parties agree that Germany needs more investment.

Party manifestos of the center-left SPD, the center-right CDU/CSU, the Greens and the Left party identify railways, public transport, electric-vehicle charging stations, and internet infrastructure among the areas where more money should flow.

Capital-goods and technology hardware companies such as Infineon Technologies AG could benefit from the investment push, according to Felix Huefner, UBS Group AG’s chief German economist.

While the SPD, which is leading in opinion polls, and the Greens have put a figure of about 50 billion euros ($59 billion) on the additional financing needed annually from public coffers, the CDU/CSU bloc and the pro-business FDP have focused more on cutting red tape and giving incentives for private investment.

For its part, the FDP backs “gigabit vouchers,” which could mean upside for the telecom industry, including companies such as Deutsche Telekom AG and Vodafone Group Plc, according to Barclays, while Societe Generale sees smaller German companies in the SDAX and MSCI Germany Small Cap indexes gaining from the investment plans of the parties.

All of the latest polls show the SPD ahead. A government led by the center-left party may be less committed to the draconian fiscal discipline of the CDU/CSU-led coalition, which could translate into gains for stock markets in southern Europe.

A government headed by the SPD’s Olaf Scholz “would likely be rather lenient towards public finances elsewhere in Europe too,” according Wolfgang Bauer, fixed-income fund manager at M&G Investments.

Still, constitutional provisions and the SPD’s potential need for backing from the right to form a government mean that its ability to take a laxer approach to spending will probably be restrained.

The party also would be more supportive of further integration in the European Union, which “could give a further boost to peripheral European risk assets,” said Bauer. Investors who want to bet on further integration could take a long position in Italy’s FTSE MIB index, according to Societe Generale.

An outcome that could pave the way for more fiscal stimulus, both in Germany and in the EU, is a potential tie up between the SPD, the Greens and the Left party. Besides higher spending, it could lead to increased taxes, more regulation, and potentially a higher inflation, said Emmanuel Cau, head of European equity strategy at Barclays.

“The tail risk is very much a left-wing coalition, which is likely to be seen as a change from a market standpoint,” he said. “That’s something to watch because obviously you could have the biggest implications in terms of rates markets, in terms of broader European equity markets, in the periphery in particular.”

Such a scenario would be a blow to the German car industry, according to Barclays, if there’s a significant boost of the minimum wage, much tougher climate policies, and a broad increase in taxes.

Berenberg analysts see a left-wing coalition as a risk with 20% probability. “Such an alliance could harm trend growth over time through reform reversals and a wave of regulations,” the analysts, including Jonathan Stubbs, wrote in a note to clients.

Societe Generale is more relaxed, pointing out that a higher minimum wage would lend support to German domestic consumer stocks. “Smaller coalition partners will have to make concessions to join and won’t be able to change policy meaningfully,” Kaloyan said.

Whether the anti-capitalist Left party joins the next coalition or not, the aviation sector is likely to face headwinds after the election.

“Short-haul travel in general will face the toughest policy outcome” in any combination of parties in the next government, Bernstein analysts including Daniel Roeska wrote, highlighting that easyJet Plc, Ryanair Holdings Plc and Wizz Air Holdings Plc are negatively exposed to the vote.

Barclays is more sanguine about German real estate, such as Vonovia SE. “While both the SPD and Greens wish to limit rent increases for current tenants by linking rent increases to inflation and limit modernization efforts by landlords, neither party is actively campaigning for a nationwide rent freeze,” analyst Sander Bunck wrote.