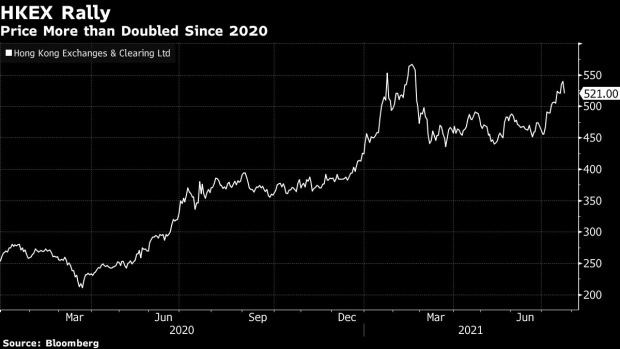 A water taxi sails on along Victoria Harbor past buildings in Hong Kong. , Bloomberg

(Bloomberg) -- China’s overhaul of Hong Kong’s political institutions has crushed the pro-democracy movement and fueled warnings of an end to the city’s status as an international financial hub. Yet more than a year after the crackdown began, signs of an investor exodus are hard to find.

Shares of Hong Kong’s exchange operator have doubled since the start of 2020, reflecting confidence in the city’s ability to lure Chinese listings. The local currency is near the strong end of its trading band against the dollar, suggesting capital outflows aren’t a worry. Major global banks and financial institutions including BlackRock Inc. and Citigroup Inc. have maintained or grown their presence in the city. Employment in the finance and insurance sectors rose in 2020 from a year earlier.

That comes even as surveys suggest growing concern among some expatriate executives about the crackdown’s impact on civil liberties and rule of law, following the mass arrest of pro-democracy advocates and threats to the free flow of information under the sweeping National Security Law imposed by China in July 2020.

For now, even as authorities enforce broad new powers to stifle dissent, they appear to have not yet crossed the financial industry’s red lines. Those include internet restrictions, currency controls, curbs on doing deals and changes to Hong Kong’s prized legal system that would impact global business, said Fraser Howie, an author of books on the Chinese markets and former managing director at brokerage CLSA Ltd.

“I see no evidence that the financial industry is actually going to be changing their actions because ultimately what they do is deals, and if you can still do a deal, they will do it,” Howie said.

Whether Hong Kong upholds its legal and regulatory standards will be critical, said Douglas Arner, a law professor at the University of Hong Kong and an expert on the city’s financial system. “If we were to start seeing a regulatory environment that no longer matched international standards and approaches, that’s the sort of thing that would indeed cause shifts,” Arner said.

Hong Kong optimists are betting the Communist Party simply has too much riding on the financial hub to allow its appeal to fade. The city’s role as a key fundraising center for Chinese firms is only growing as Beijing seeks to dissuade the nation’s firms from listing in the U.S. The central government has opened channels via Hong Kong to enable foreign capital to flow into the country’s financial markets, as well as let some money out. Hong Kong’s dollar is freely convertible, unlike China’s yuan.

Inflows suggest global investor confidence in the city remains high, a point that Hong Kong Chief Executive Carrie Lam regularly emphasizes when responding to critics. So much money poured into Hong Kong last year that the city’s monetary authority stepped in 85 times to prevent the local currency from strengthening past its permitted trading range.

Aggregate inflows of $50 billion -- the most since 2010 -- pushed a measure of liquidity in the financial system to a record in October. It hasn’t dropped since and the Hong Kong dollar remains firmly in the strong half of its trading band. Mainland capital has also come in at a record pace via stock exchange links in Shanghai and Shenzhen, including an unprecedented around $40 billion net inflow in January.

Companies have raised about $33 billion through Hong Kong listings in 2021, nearly double last year’s pace, data compiled by Bloomberg show. More Chinese firms are likely to shift listings to the city from the U.S. on expectations the approval process by Beijing will be less onerous. That’s helped make shares of Hong Kong Exchanges & Clearing Ltd. the world’s top-performing major bourse this month.

“U.S. capital markets are now less hospitable to Chinese firms due to geopolitical tensions and China’s domestic markets are not yet mature or open enough to fill the gap,” said Michael Hirson, head of China and Northeast Asia at Eurasia Group. “That leaves Hong Kong in a unique role, at least for the time being.”

There is still plenty to worry about for the city’s 200,000-strong financial industry. This month the Biden administration warned investors about the risks of doing business in Hong Kong, citing concerns about the security law, data privacy and access to critical business information. A bill to toughen legislation banning the publication of personal information to harass people -- or “doxxing” -- has raised concern about internet censorship. Businesses in the city may also get affected by escalating tensions between Washington and Beijing that include tit-for-tat sanctions.

In May, 40% of those who responded to a survey by the American Chamber of Commerce in Hong Kong said they might leave the city -- highlighting the business community’s concerns over the national security law and the local government’s handling of Covid-19 outbreaks.

“Beijing’s crackdown on free speech and the imposition of its version of the rule of law, which could together block the free flow of information and denude investor protection, increases the flight risk of foreign businesses and investors,” said Eswar Prasad, who once led the International Monetary Fund’s China team and is now at Cornell University.

Banks so far appear to be digging in. For example, Citigroup Inc. said this year it will hire as many as 1,700 people for its operations in Hong Kong as part of a plan to capture more business in China’s Greater Bay Area. In April, the firm excluded its Hong Kong consumer operations from a decision to exit retail banking in 13 markets across Asia and Europe. The lender will instead focus on four regional wealth hubs, including one in Hong Kong.

BlackRock Inc.’s Larry Fink and Bank of America Corp.’s Brian Moynihan are among executives who’ve said as recently as this month that rising tensions between the U.S. and China had left them unfazed and won’t affect their operations in Hong Kong.