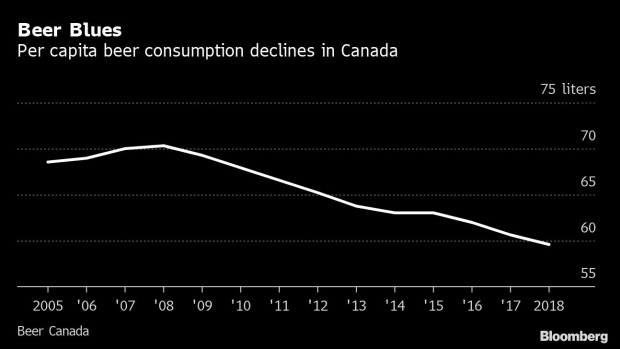 (Bloomberg) -- The world’s biggest brewer will kick off its push into cannabis-infused beverages with a lineup of flavored teas -- Lavender Chamomile, Vanilla Rooibos and Peach Ginger Green.

The “Everie” teas will contain 98% pure cannabidiol, the non-psychotropic ingredient in cannabis, with only a trace -- 0.05 milligrams -- of THC, the component that gets you high. They will be sold through Fluent Beverages, a joint venture between Anheuser-Busch InBev NV’s Canadian unit and pot company Tilray Inc.

The drinks will hit the shelves after pot edibles and beverages become legal in Canada next week. Non-alcoholic sparkling beverages will follow early in 2020, the company said. AB InBev, based in Leuven, Belgium, sells Budweiser, the top-selling beer in Canada.

“The products we’ll be launching through Fluent are CBD only,” Kyle Norrington, president of Labatt Breweries of Canada, said in an interview at Bloomberg’s office in Toronto. For now, AB InBev doesn’t plan to move into THC-focused beverages, and it won’t be selling the CBD drinks in the U.S. where cannabis remains illegal at the federal level.

The push by brewers into cannabis beverages is another way of diversifying amid declining beer sales. Consumers are opting for wines, spirits, ciders and increasingly, less alcohol. That trend saw per capita beer consumption in Canada drop 18% to 59.6 liters per year from a peak in 2008, according to Beer Canada, an industry group.

Canopy plans to offer both THC and CBD drinks made from distilled cannabis while Truss Beverage Co., the Molson-Hexo tie up, will sell Flow Glow CBD beverages.

The pot industry is counting on drinks and edibles to help it recover from a miserable year after the blind optimism surrounding Canadian legalization in October 2018. Pot stocks have slumped amid disappointing sales, regulatory breaches and a slow rollout of dried flower products.

Labatt’s Norrington, 44, hasn’t been disappointed by his company’s foray into the cannabis space.

“It is a good investment for us to continue to learn about the opportunities that exist within non-alcoholic CBD beverages,” he said. “That is a great opportunity.”

Labatt’s “beyond beer” drive could result in beer dropping to about 90% of the 172-year-old brewer’s revenue in the next five years or so, from 95% now as sales of its alternative products continue to expand. More health-conscious products such as Michelob Ultra, with only 95 calories and Labatt’s fastest-growing brand, should also continue to grow, Norrington said.

“I see us selling much more beyond beer in the future,” he said.

To contact the reporter on this story: Jacqueline Thorpe in Toronto at jthorpe23@bloomberg.net

To contact the editors responsible for this story: David Scanlan at dscanlan@bloomberg.net, Sally Bakewell