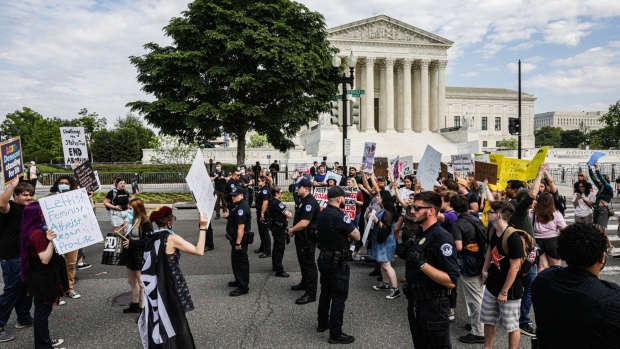 Capitol Police officers separate abortion rights demonstrators and anti-abortion rights demonstrators outside the U.S. Supreme Court in Washington, D.C., U.S., on Wednesday, May 4, 2022. Overturning Roe v. Wade, following the leak of a draft opinion overturning the abortion-rights ruling, risks widening economic inequality in the U.S. threatening decades of gains for women in places where abortion could be all but banned. , Bloomberg

(Bloomberg) -- Conspiracy theorists have latched on to the debate over US abortion rights on Facebook, Twitter, YouTube and TikTok, leading to a spike in misinformation around what is already one of the most politically-charged topics online — and signaling the complex decision-making that lies ahead for social media companies if the procedure becomes illegal in some states.

For years, social networks have been criticized for hosting user posts and advertisements that seek to confuse people about their right to access abortion or about the safety of the procedure. Since May 2, when Politico published a draft Supreme Court decision that would overturn Roe v. Wade if finalized, researchers have seen a surge in posts connecting the leak itself to already-problematic conspiratorial storylines.

Nearly 200 far right Facebook groups with names like “Nashville Tea Party” and “Southern Conservatives United” lit up with posts spreading the baseless idea that the Antifa movement — a loose collective of antifascist activists — had helped coordinate the leak as part of a broad leftist campaign of intimidation and violence against the Supreme Court justices. On Twitter, hundreds of tweets questioned the timing of the draft ruling’s leak, asserting that it distracted from news favorable to Donald Trump. And on Telegram, dozens of chats dedicated to the QAnon conspiracy, which falsely posits that a group of global liberal elites run a child sex ring that Trump would stop, discussed how abortion is a form of human sacrifice.

These false storylines surged to the thousands or tens of thousands mentions in the last week, according to Zignal Labs, which tracks topics on social media and in the news. According to Zignal, content from less reliable sources referencing abortion has more than doubled since Politico’s publication of the leaked draft, compared to the volume of conversation on abortion the month before the leak occurred, which was already heightened due to changing laws in some states.

The abortion topic is “salient to communities where misinformation has readily flowed in recent years, such as motherhood groups, conservative religious groups and anti-science communities,” said Rachel E. Moran, a researcher at the University of Washington who studies online conspiracy theories.

Misinformation about abortion has long circulated in right-wing communities. In 2019, Media Matters for America, a liberal watchdog group, found that of the top-engaged U.S. abortion-related stories on Facebook, 63% of links with the most Facebook interactions came from right-leaning websites that pushed anti-abortion falsehoods, including that Democrats support infanticide or that abortion is never needed to save a mother’s life. In February, Representative Jerrold Nadler, the Judiciary Committee chairman, sent a letter to Facebook asking the company to explain why it promoted ads about “abortion reversal” treatments, in spite of the known dangers of the unproven medical procedure. Meta Platforms Inc., the owner of Facebook, responded to the letter stating that ads that discuss abortion services are permitted under its policies with a required disclaimer. It added that the company restricts ads promoting reproductive health products to people 18 years and older, and that it prohibits ads with misinformation when the claims have been debunked by its third-party fact checkers.

The new spike in abortion misinformation is “another battle in a long war, one that anti-choicers have been waging since long before social media,” said Melissa Ryan, chief executive of Card Strategies, a consulting firm that researches disinformation. “It will only get worse once Roe is gone,” she added. “And since the tech companies know this is coming, they should prepare. Like Covid and climate change, reproductive health shouldn't be political.”

For issues like the pandemic, which has prompted a surge in anti-vaccination conspiracies, and the 2020 election results, which led to false theories that it was stolen from Trump, social media companies have broadly labeled posts redirecting users to information from authorities. But for abortion, a politically-charged medical issue, they are unlikely to come up with a specific labeling campaign, and instead let the posts be moderated under a broader rule, that content can be taken down if it will lead to “imminent harm.”

Part of the problem is that falsehoods about abortion are so commonplace that they are easily overlooked. Misconceptions about the medical procedure are “so baked into our culture that it can be invisible in a lot of ways,” according to Ellie Langford, the author of “The Lie That Binds,” a book covering the evolution of abortion politics in America. She disputed the idea that abortion misinformation doesn't constitute an imminent, real-world threat to health and safety, pointing to abortion clinic bombings since the late 70s, as well as the harassment of providers and patients who have publicly said they had undergone the procedure. “Of course there’s the risk of imminent harm with anti-choice disinformation when it comes to healthcare and an individual’s safety.”

Companies have also historically adjusted their policies to fit geographically-specific legal requirements. If Roe is overturned, abortion would become illegal in thirteen states — some with laws that punish citizens for assisting others in obtaining one. Companies may hesitate to direct users to accurate information that may support an abortion decision, for fear of running afoul of the law.

Meta spokesperson Kevin McAlister said several of the pages shared by Bloomberg had repeatedly shared content that has been fact-checked, and that it had downranked them in Facebook’s news feed. McAlister added that Facebook’s community standards would apply to posts about abortion, such as policies against bullying and harassment, violent and graphic content, and privacy violations.

Twitter Inc. said its misinformation policies currently apply to Covid-19, civic integrity and manipulated media, but for abortion or other charged topics, it tries to counter misleading claims by elevating credible information through, for example, Twitter Moments. Google’s YouTube said it was committed to enforcing its community guidelines, regardless of the topic. ByteDance Ltd.’s TikTok said it routinely labels videos to inform viewers when the content in them is unsubstantiated. Telegram didn’t respond to a request for comment.

On May 3, one day after the publication of the Supreme Court’s draft ruling, Josh Barnett, a Republican candidate for Congress in Arizona, tweeted, “They leaked Roe v Wade to hide 2000 Mules info,” referencing a new film that falsely suggests ballot “mules” aligned with the Democratic Party were paid to illegally collect and drop off ballots in swing states. Barnett’s post collected 27,100 likes and shares on Twitter. It was one among nearly 600 other posts in the past week questioning the timing of the leak as it related to the release of the film, peaking at 15 tweets an hour on the evening of May 3, according to an analysis of Twitter on Dataminr, a social media monitoring service. Barnett didn’t respond to a request for comment.

On Facebook, posts connecting the leak of the draft ruling to Antifa-led “rioting” collected 12,600 likes and shares on the platform, according to data from CrowdTangle, a Facebook-owned social media analytics tool. Meta said that number is minuscule compared to the content shared on its apps and that it was not likely every person in the groups engaged with the posts given their metrics. But according to the CrowdTangle data, as many as 12.7 million people may have seen the posts, even if they did not like or share them. In one of the groups, a Facebook page called the Stanford College Republicans with nearly 10,000 followers went further, pushing an unproven conspiracy that the leak was “a coordinated leftist campaign to intimidate Supreme Court justices, and even use force against them.”

The baseless idea was amplified on YouTube, where the right-wing influencer Tim Pool posted a video on May 4 proclaiming “RIOTING Erupts Over SCOTUS Abortion Leak, Liberals Call For Violence And Revolution Over Roe v. Wade.” The video collected more than 271,000 views, with the comments awash in conspiracies. “What's interesting, how fast these activists could stage a rally when the leak only came yesterday,” said one, whose comment collected 230 upvotes. “Almost like they knew before the leak?” Pool and the College Republicans didn’t respond to a request for comment.On TikTok, several accounts posted videos, without evidence, that a particular Supreme Court clerk was behind the leaked draft ruling, collecting over 41,000 views on the platform. The company said it made those videos ineligible for recommendation into For You feeds and applied a label to warn users that its contents were unproven after Bloomberg News reached out.

And on Telegram, dozens of channels dedicated to the QAnon movement fired off new conspiracies about the Supreme Court’s draft ruling, such as one falsely asserting that “they” leaked it to generate fetuses for “cannibalistic lifestyles, satanic rituals & sacrifices, ” as well as “godless scientific needs.”

Alex Stamos, the director of the Stanford Internet Observatory and a former head of security at Facebook, said that after the 2020 presidential election, tech companies favored “moving away from content-based policies towards actor and behavior based policies.”

Content-based policies, such as Facebook’s third-party fact-checkers individually scanning and researching stories to label them as false if necessary, can be unevenly applied, leading to criticism from the public. Behavior-based policies, such as blocking coordinated efforts by multiple accounts to spread a falsehood or scam, are perceived as fairer. But designating certain actors as “dangerous” and banning them wholesale from a platform — like most of the social media services did with QAnon in late 2020 — is an extreme step that companies tend to shy away from because of how politicized the move can appear.

Amid the noise, and in absence of broad action from the social media platforms, health advocates and others worked to spread accurate information: Roe has not yet been overtuned and abortion, for now, is federally protected. “If you have an appointment tomorrow, next week, soon, you are still fine,” said a post from a Facebook page called Feminist News. “Don’t let people scare you out of getting care. Nothing is in effect until the decision actually comes.”