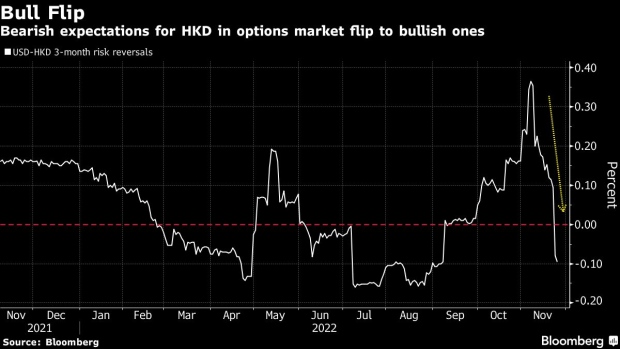 Bill Ackman, chief executive officer of Pershing Square Capital Management LP, speaks during an interview in New York, U.S., on Monday, Oct. 9, 2017. Ackman's Pershing Square Capital Management, which in August disclosed an 8.3 percent stake in Automatic Data Processing Inc. consisting of stock and options, has been pushing for three seats on the company's board. Ackman, who would get one of the seats, seeks to replace the three longest-tenured directors, including Chairman John Jones. , Bloomberg

(Bloomberg) -- Bill Ackman’s revelation that he’s betting big on a collapse of Hong Kong’s pegged dollar will come across as contrarian to some in the market and mistimed to others.

The city’s multiple interventions to prop up its currency since May have made shorting it unprofitable, sending interbank rates higher than their US equivalents, chilling a once-popular carry trade. That’s helped the local dollar roar back toward the middle of its tight trading band with the greenback, on track for its biggest monthly gain since March 2020. There are few signs of a currency crisis.

Still, the founder of hedge fund Pershing Square Capital Management LP said on Twitter his firm owns a “large notional position” in Hong Kong dollar put options, betting the peg with the greenback will eventually break, without clarifying the size of the wager.

“Conditions are not favorable for selling Hong Kong dollar which will suffer negative carry,” said Carie Li, a strategist at DBS Bank Ltd. “The Hong Kong government also shows no intention to change the system.”

Part of Ackman’s premise, which referenced a Bloomberg Opinion column by Richard Cookson, is that it no longer makes sense for Hong Kong, a Chinese city deeply entwined with the mainland’s slowing economy, to be beholden to US monetary policy.

It’s easy to follow that logic. As a small and open economy, Hong Kong is especially vulnerable to money flowing in and out. It was hit hard by the Asian financial crisis of the late 1990s, that ultimately led to the city’s de facto central bank buying Hong Kong stocks and using its foreign-currency reserves to defend the dollar peg.

And perhaps nowhere else is as exposed to two of the biggest worries currently roiling global markets -- the Federal Reserve’s rapidly tightening monetary policy and China’s sputtering economy.

But today the city is far better equipped to deal with external shocks. Despite the recent decline, Hong Kong’s foreign exchange reserves are still far higher than levels seen during the Asian crisis. At $417 billion, they offer plenty of firepower for the city to defend the currency in the face of capital outflows.

Meanwhile, elevated local rates are increasing the appeal of owning the Hong Kong dollar after months of profitable depreciation wagers. Three-month interbank funding costs for the currency, known as Hibor, have climbed to the highest since 2007, surging well above comparable rates on the greenback -- or Libor.

That marks a dramatic reversal from earlier in the year, when Hibor was lower than Libor. The resulting short Hong Kong dollar trade became so popular that the currency was repeatedly pushed to the weak end of its trading band against the greenback, prompting the Hong Kong Monetary Authority to repeatedly intervene.

Other market indicators also reflect little appetite among investors to bet the peg will break. Three-month risk reversals for the US-Hong Kong dollar, a gauge of its expected direction over that time frame, have flipped negative. That suggests traders have turned bullish on the prospects for the local dollar -- at least in the short term.

The idea of striking against the Hong Kong dollar peg is not new. Kyle Bass, the founder of Hayman Capital Management, and George Soros have both tried and failed to bet on the currency’s collapse. Ackman himself made a wager that the peg would break on the strong side in 2011.

And he’s not alone this time. Hedge fund manager Boaz Weinstein, founder of Saba Capital Management, tweeted support for the trade, which he said had a payoff upwards of 200-to-one.

“Bill’s trade is a smart lottery ticket and I also have it on,” he posted.

The HKMA reiterated Thursday that the linked exchange rate system -- a currency peg that has endured mostly unscathed for almost 40 years -- will remain unchanged.

“Individual market participants have expressed doubts about the linked exchange rate system from time to time,” it said. “Most of these remarks are based on their misunderstanding of the system or their own fund positions.”