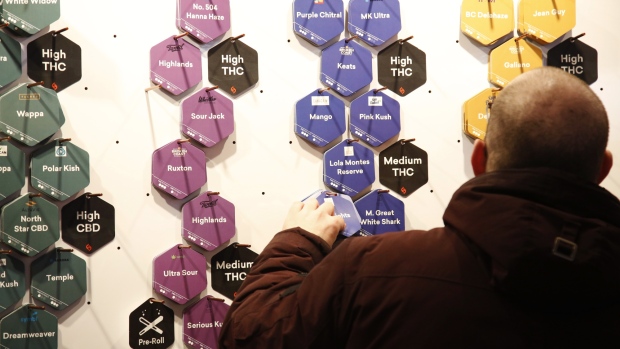 Cards for different kinds of cannabis products are displayed on a wall at the Fire & Flower cannabis shop in Ottawa, Ontario, Canada, on Monday, April 1, 2019. Canada's most populous province will finally open its first pot shops, nearly six months after legalization. Only 10 stores in Ontario had received the necessary licenses to open on April 1. , Bloomberg

(Bloomberg) -- One of Acreage Holdings Inc.’s earliest shareholders has come out in favor of its sale to Canopy Growth Corp. as the target company’s shares languish well below the offer price.

Cresco Capital Partners LLC, which has owned Acreage since 2015, said the New York-based cannabis firm’s association with Canopy will give it a capital boost even before the closing of the deal, which is contingent on U.S. legalization.

“I think at the end of the day people will take a step back and realize that the positives far outweigh the negatives on this,” Matt Hawkins, founder and managing partner of Dallas-based Cresco Capital, said in a phone interview.

Hawkins sent a letter supporting the deal to his fund’s investors Thursday, arguing that consolidation will benefit Acreage and the cannabis industry as a whole.

Activist investor Marcato Capital Management said earlier this month it will vote against the takeover because it undervalues Acreage. Marcato believes the value of pot firms will soar with U.S. legalization, so “it is highly imprudent for Acreage to sell itself today at the proposed valuation, with so much unlocked growth and value embedded in the company.”

Under the terms of the offer, Acreage investors will receive $300 million in cash up front, with the remainder to be paid in Canopy shares if and when U.S. laws change. Currently, the deal is worth about $3.4 billion, or a little over $29 per Acreage share. That’s about $10 above Acreage’s closing price Wednesday of $19.25, making it among the highest premiums of 105 deals tracked by Bloomberg.

Canopy said in a filing Thursday that it can waive the condition that the deal is contingent on U.S. legalization and intends to do so if the New York Stock Exchange or Toronto Stock Exchange change their listing rules. Currently, the exchanges won’t list companies that are breaking U.S. federal law.

Despite the spread between the offer price and Acreage’s current share price, Hawkins said he believes shareholders will approve the deal at a vote scheduled for June 19. The offer requires the backing of two-thirds of Acreage shareholders.

The agreement allows Acreage to issue up to 58 million subordinate voting shares before U.S. legalization. Because those shares will be converted into Canopy stock if the deal is completed, that gives Acreage “a very attractive piece of paper to be utilizing in transactions,” said Hawkins. Canopy has the largest market value and is the most liquid of all pot stocks.

“That right away bolsters Acreage’s ability to get access to the best assets in the nation,” Hawkins said. “I think having a partner in Canopy immediately is something that’s far superior to waiting for a watershed moment in legalization to occur before you can do anything.”

To contact the editors responsible for this story: Brad Olesen at bolesen3@bloomberg.net, David Scanlan, Jacqueline Thorpe