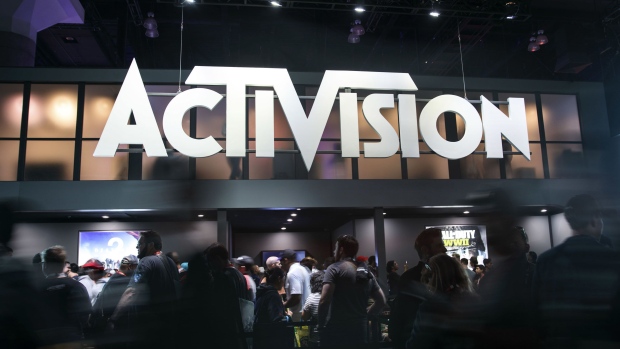 (Bloomberg) -- Activision Blizzard Inc. employees have had a range of differing and sometimes conflicting emotional responses to news this week that their company will be purchased by Microsoft Corp. for $69 billion.

There has been trepidation about potential layoffs; optimism about Microsoft’s recent history of buying game companies and then leaving them alone; determination to fight for better wages and more worker protections.

But above all, more than a dozen employees across Activision Blizzard’s divisions say they’re relieved that something -- anything -- has actually happened that could fundamentally change the company’s course. Many people had been worried that the status quo would remain intact, and that was unacceptable.

Chief Executive Officer Bobby Kotick and his management team have dodged scandal after scandal, starting with a California lawsuit last summer alleging sexual harassment and discrimination. After the Wall Street Journal reported in November that Kotick was aware of the bad behavior and even perpetrated some himself, the board publicly stood by him, leading to attrition and low morale across the video game publisher, which makes games such as Call of Duty and Candy Crush Saga.

The fury toward Kotick empowered employees to criticize and mock him on social media, which was unprecedented for the typically reserved video game industry. More than 1,800 of the company’s 10,000 employees put their names on a petition calling for Kotick’s resignation, but by the end of 2021, it seemed like his 31-year reign as CEO would continue.

On Tuesday, everything changed. Once Microsoft’s acquisition of Activision Blizzard closes, Kotick is expected to exit, Bloomberg has reported. That news alone may be enough for the struggling publisher to retain some staff who were wavering, a sentiment expressed by most of the employees who talked to Bloomberg this week, who requested anonymity because they aren’t authorized to speak to the press.

Employees from Activision Blizzard’s various studios, from Treyarch in Santa Monica, California to Blizzard in Irvine and King in Stockholm, said they expected Phil Spencer, who was promoted to CEO of Microsoft Gaming, to be a stronger leader than Kotick. Several pointed to Microsoft’s successful acquisition of independent studios such as Double Fine Productions and Obsidian Entertainment, which have been mostly allowed to operate autonomously. Others said they were cautiously optimistic, but also upset that Kotick would still be in charge for at least the next six months. Microsoft said it expects the deal to close in its next fiscal year, which runs from July 2022 through June 2023.

Microsoft now inherits the cultural crisis that Activision has faced over the last year. Kotick noted, in a brief all-hands meeting with staff Thursday morning, that “Microsoft has been on its own journey to improve its workplace,” according to a transcript reviewed by Bloomberg. In fact, many of the problems within Blizzard Entertainment’s Battle.net division, which was known for rampant use of alcohol and bad behavior, were caused by a group of people who had previously worked at Xbox.

Microsoft CEO Satya Nadella and Spencer both made assurances at the time of the announcement that creating an inclusive culture in gaming was a priority for the combined company. Kotick, who was publicly accused of threatening a subordinate and protecting a studio head accused of sexual harassment, has lost the trust of some of his staff to fix any cultural problems at Activision. Some employees believed he was responsible for many of them.

The acquisition may also be transformative for Activision Blizzard’s business strategy, another potential boost to morale. Under Kotick, the company released a new game in the blockbuster Call of Duty franchise every year without fail, helping the series sell more than 400 million units. Churning out a new game every year led to brutal overtime for workers at companies such as Treyarch and Encino-based Infinity Ward.

High-level employees at Activision have discussed moving away from the annual release schedule, according to two people familiar with the discussions. Although nothing has been finalized yet, there’s a belief among many Call of Duty developers that releasing games at a slower cadence will please players and help bolster the franchise, particularly after the weak launch of last year’s Call of Duty Vanguard, which saw a 36% decline from 2020’s entry in U.K. sales charts. The shift may not happen until next year or later, as this year’s Call of Duty is expected to redeem the franchise’s fortunes.

Slowing down the Call of Duty release schedule may lighten developers’ intense workloads and could provide new opportunities for Activision’s gamemakers to work on other titles. The Blizzard division could also benefit culturally and strategically from the acquisition.

Activision has long followed a traditional business model, chasing big blockbusters such as Call of Duty and Candy Crush while ditching franchises with less potential, such as StarCraft. Xbox takes a different approach due to its Game Pass, a Netflix-like subscription plan that allows users to pay a monthly fee for access to a large variety of games. Thanks to Game Pass, not every game needs to be a massive hit to be considered a success. Xbox’s strategy has been to fund and acquire a variety of eclectic titles that may help draw new subscribers.

Hundreds of people have left Blizzard in recent years and started new companies to make games that Blizzard wouldn’t consider. If Xbox offers more creative freedom to Blizzard employees, the exodus may slow.

But lots of questions linger. Several Activision Blizzard employees wondered if the acquisition would lead to job cuts, which Microsoft hasn’t addressed. Others said they wouldn’t be happy until the company paid fair salaries, particularly in departments such as quality assurance, where some say they don’t make a living wage. Testers at Activision’s Raven Software in Madison, Wisconsin have been on strike for a month and a half following job cuts last year, whom the company has so far ignored.

Some employees at Activision are still working to unionize, an effort that may take different shapes across the company, and one that the Microsoft acquisition hasn’t deterred.

In the Thursday meeting, Kotick didn’t acknowledge his role in Activision’s cultural crisis or say whether he would step down after the acquisition. He said there was “nothing more important to me, other than my children” than Activision Blizzard. “This is going to be a great journey,” he said.