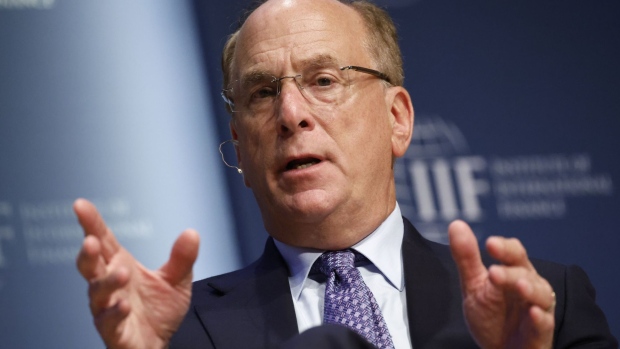 Larry Fink, chairman and chief executive officer of BlackRock, speaks during the Institute of International Finance (IIF) annual membership meeting in Washington, DC, US, on Wednesday, Oct. 12, 2022. This year's conference theme is "The Search for Stability in an Era of Uncertainty, Realignment and Transformation." , Bloomberg

(Bloomberg) -- Bluebell Capital Partners is calling on BlackRock Inc. to replace Chief Executive Officer Larry Fink over what it says are his failures to move the world’s largest money manager beyond investments in fossil fuels.

The criticism by the small activist investor comes as BlackRock and Fink face attacks by Republican politicians in the US for pursuing sustainability goals and a “woke” agenda at the expense of returns. Bluebell, on the flip side of that argument, warns that Fink, despite his high-profile role in advocating for so-called ESG investing, is undermining BlackRock’s credibility by continuing to invest in fossil fuels including coal.

“We are increasingly concerned about the reputational risk (including green-washing risk) to which you have unreasonably exposed the company, potentially fueling a gap between the ‘talk’ and the ‘walk’ on ESG investing,” Bluebell said in a letter to BlackRock’s board.

Bluebell urged the board to conduct a strategic review of BlackRock’s stance on ESG to eliminate inconsistencies and contradictions. While Fink could stay on as chairman, that role should be split from that of CEO, Bluebell wrote in the letter dated Nov. 10.

BlackRock said in an emailed statement that, over the past 18 months, Bluebell has waged a number of campaigns to promote its climate and governance agenda.

“BlackRock Investment Stewardship did not support their campaigns as we did not consider them to be in the best economic interests of our clients,” according to the statement.

Bluebell’s stake in BlackRock is about 0.01%, according to BlackRock. A representative for Bluebell didn’t immediately respond to requests for comment on the size of its stake outside regular business hours in London, where the firm is based. Bluebell’s letter was reported earlier by the Wall Street Journal.

Since its launch in 2019, Bluebell, small by activist standards, has taken on the likes of Richemont, Glencore Plc, Vivendi SE and GlaxoSmithKline Plc. Last year, it helped engineer the ouster of food group Danone SA’s Chairman Emmanuel Faber. Bluebell’s complaints in its letter include BlackRock opposing its proposals in some of those campaigns.

BlackRock, like other firms that have embraced ESG investing, continues to draw fire from Republicans who accuse it of pursuing a “climate agenda” instead of focusing on returns for investors, including public pension funds in their states. Last week, Florida announced it was pulling about $2 billion from BlackRock in the largest anti-ESG withdrawal yet by a US state.

Responding to the GOP backlash, BlackRock has poured record amounts of money into US political campaigns this year. Fink said last week that he has been spending a lot of time in Washington to “correct the narrative.”

New York City’s comptroller, though, has complained that BlackRock hasn’t done more to push corporations to combat global warming. In September, it warned BlackRock, which manages $43 billion for three of the city’s pension funds, that it was re-assessing that business.

(Updates with detail of letter in eighth paragraph)