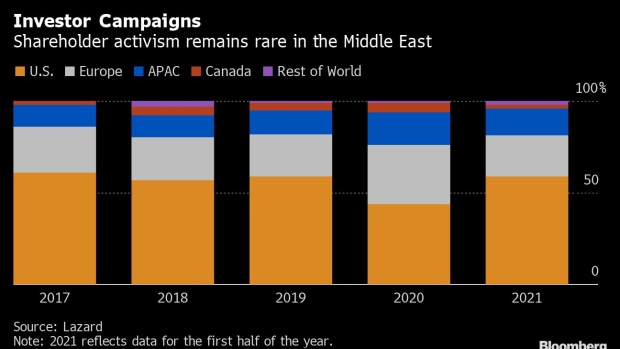 Activist investing can be a lonely slog in the Middle East.

The hardball tactics deployed by Carl Icahn or Paul Singer’s Elliott Investment Management are all but unheard-of in a region where board decisions rarely meet dissent while shareholders work out their differences behind closed doors.

But the Gulf’s listed firms, at a cumulative market value of nearly $3.5 trillion, may be the next frontier for activists pushing management to make strategic or operational changes, especially as competition for foreign capital intensifies within the region and more companies go public. Shareholder campaigns could also alter the calculus for corporations after a series of recent delistings saw little in the way of pushback from investors.

One fund in the Gulf that hasn’t shied away from corporate showdowns is Sancta Capital. Drawing inspiration from Baupost Group, the Dubai-based alternative asset manager says it’s the only firm in the Middle East and North Africa that focuses on special situations investing.

“A decade ago we drove change behind closed boardrooms and in private court proceedings,” said Ahmad Alanani, chief executive officer and co-founding partner at Sancta Capital. “Today, we see a new order emerging driven by rapid legislative reform and intense competition for capital.”

At the heart of Sancta Capital’s strategy is seeking value through “constructive dialogue” with its portfolio companies. But when necessary, it will assert its interests by “whatever means available to us,” Alanani said.

The approach has propelled the firm to a prominent role in a series of corporate debt restructurings and shareholder campaigns that have recently included a successful bid to scuttle a bond swap proposal by Emirates REIT.

With $160 million in assets under management, the fund has built a track record of agitating for corporate change, and it has the performance to show for it. Since inception in 2011, Sancta Capital has generated an annualized net return of 13.5% through last month. Its flagship fund is up 18.6% net this year through August 2021.

An index of hedge funds focused on the Middle East is up 9.5% in the first eight months of the year, according to Hedge Fund Research Inc.

“Activism is playing an increasingly important role in driving stakeholder value in our region, as the standards for accountability and transparency increase,” said Gus Chehayeb, chief investment officer and co-founder of Sancta Capital.

The slow but steady increase in activist cases may also point to a wider change in the region. The concept of filing for bankruptcy has become more acceptable and governments across the region have put in place laws that allow companies to seek protection from creditors.

Looking ahead, Alanani says Sancta has “built a deep pipeline of credit and equity opportunities in the UAE and Saudi Arabia, where top-down reform is forcing companies to re-configure their business models in order to thrive and attract capital.”